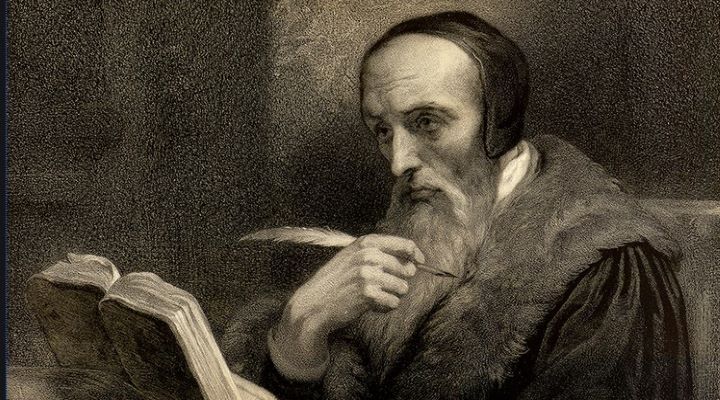 Received Into the Number: A Theology of Adoption Part VIII- John Calvin’s Doctrine of Adoption In this series, we have been looking at what God’s Word says about adoption as both an earthly call to care for orphans and as a picture of how He saves undeserving sinners in need of a right relationship with Him. You can read Parts I, II,  III, IV, V, VI, and VII here. In this article, we start a new phase of this series by learning what some of our most well-known theologians have said about this doctrine, beginning with “The Theologian”, John Calvin.

Who was John Calvin?

John Calvin is easily one of the most influential theologians in church history. His Institutes of the Christian Religion was published and republished several times, including editions in Latin in 1539 and French in 1541. Calvin wrote countless letters, tracts, and commentaries on books of the Bible. His works have been read, studied, and debated and for good or bad, the teachings of what became known as “Calvinism”—however defined, have been associated with him.

In 1509 John Calvin was born to Gérard Cauvin and his wife at the time, Jeanne le Franc.[1] His father and brother came into conflict with the Roman Catholic Church and were both excommunicated.[2] Calvin’s mother died when he was about 6 years old and his father sent him away for schooling not long after. It is not hard to imagine that God may have used all that loneliness and isolation as a means to draw Calvin to himself and meditate on the doctrine of adoption in particular.

God was also gracious to send father figures into Calvin’s life. While studying in Paris, he studied under a skilled Latin instructor named Maturin Cordier. Calvin was so appreciative of Cordier’s instruction that he dedicated his 1st Thessalonians commentary to him, writing “it was a singular kindness on the part of God” to learn from him.[3] When Calvin later traveled to Strasbourg, he briefly lived with his fellow reformer Martin Bucer, who became a trusted older counselor and mentor to him.[4] Calvin had many spiritual guides and mentors, but Bucer was “truly the father figure” in his life.[5]

How should adoption be understood in relation to justification? Are they basically the same thing or distinct from one another? While Calvin affirmed that justification is a gift of God apart from works, he also recognized that faith is a “condition” in some sense.[6] Faith is required as the means to lay hold of the promises of God, including his testimony that He is your Father. Justification and union with Christ are distinct but inseparable, so in a sense, being adopted by God the Father is also “conditioned” on being united to Christ.[7]

Adoption, the Apex of Salvation

Scholars have noted that Calvin did not dedicate a particular section to adoption in his Institutes. This was not because he did not recognize the importance of adoption. For Calvin, God’s free adoption of sinners as his children is the chief blessing of the new covenant.[8] The Christian life must be understood in light of the graciousness of adoption as a free gift of God’s grace. In his Institutes, Calvin wrote that “it should be firmly fixed in our heart that the kingdom of heaven is not payment owed to servants but the children’s inheritance which will only be enjoyed by those whom God has adopted as his children.”[9]

Calvin repeatedly brought up adoption in connection with life as a Christian. The idea of adoptio or “sonship” encompasses what being a Christian means in Calvin’s thinking.[10] It was mixed into the batter, so to speak. As Joel Beeke puts it, “adoption is the apex of salvation” in Calvin’s theology.[11]

Praise God for our earthly fathers and father figures He sends us. Those of us who carry the weight and responsibility of parenting children owe an incredible debt to those who came before us. Any failings and shortcomings by our earthly fathers should only serve to drive us to the perfect Heavenly Father and his only true Son. It bears repeating that if you have never turned from your sin and looked to Jesus Christ as your Savior, do it now. Whether you had an earthy father who was there for you or not, you will never find true peace and assurance until you are right with your Heavenly Father. His Son took the punishment that we all deserve, and He accomplished what none of us could accomplish. God not only takes sinners and declares them just because of what Jesus did, but He also adopts those same sinners and welcomed them into his family.

In future articles, we will look at what Wilhelmus à Brakel, Herman Witsius, Charles Spurgeon, and other great theologians have to say about adoption.

If you have questions, comments, or requests for other topics, please feel free to contact me or leave us a comment below.

[3] Sinclair B. Ferguson, Some Pastors and Teachers: Reflecting a Biblical Vision of What Every Minister is Called to Be. (Carlisle: Banner of Truth, 2017), 5.

[8] Derek W.H. Thomas, “The Mediator of the Covenant” in A Theological Guide to Calvin’s Institutes: Essays and Analysis. ed., David W. Hall and Peter A. Lillback, (Phillipsburg: P&R Publishing, 2008), 209.

[10] Sinclair B. Ferguson, Some Pastors and Teachers: Reflecting a Biblical Vision of What Every Minister is Called to Be. (Carlisle: Banner of Truth, 2017), 147n5.