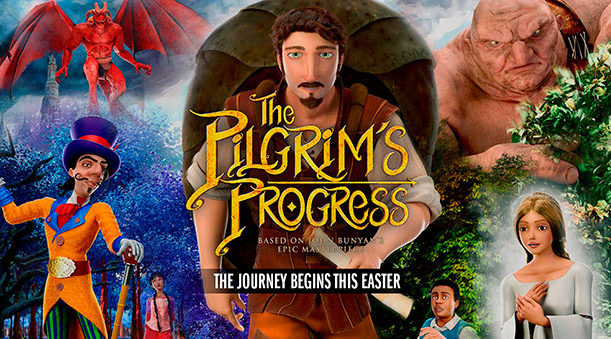 Giveaway and Review: The Pilgrim’s Progress

I count it a great privilege that bloggers are asked to review movies and books. It gives me an opportunity to preview things before the general public, and in many cases, I probably wouldn’t spend the money, so it allows me to enjoy something I otherwise wouldn’t enjoy. Stay with me for my review and my giveaway in this post. The Pilgrim’s Progress movie is a film adaptation of the great work by John Bunyan of the same name. I learned a long time ago that movies are never as good as the book…and this movie follows the same rule. Seriously, how can you make a movie based on the second best selling book of all time and the book that Christians for centuries have found a splendid work? With that in mind:

1. The movie was enjoyable

On its own, the movie was enjoyable. Like all movies, a lot of details from the book are missing, and there is only the use of dialog to tell the story. I thought the makers of the movie did a good job of including as much of Christian’s story as they could while keeping the movie from being extraordinarily long. The colors and graphics were pleasing enough for me, as well. I am not a harsh critic in those regards though. I did appreciate the filmmakers’ attempts to show some diversity in the characters (white guy, black guy, etc).

If all I did was see this movie, I probably would have found it really amazing. I would have been excited about the scriptural truth and relevance of the message ‘preached.’ I would have been shocked to hear it was from an “old book.” But having read the book and knowing the story, I can say that this movie can be disappointing. This book is so rich with meaning and truth, even so much of God’s Word that it’s like a sermon. The movie comes across as less than serious at times through the dialogue and the characters. And the animation makes even the more wicked characters appear more cartoony, rather than scary. And then there are other parts that are almost unnecessarily frightening with ghastly characters meant to look ugly and scary. It’s a movie I wouldn’t show my young sons because of that.

Overall I’d give it about a 7 out of 10. I am probably closer to being an iconoclast than most, so I was really annoyed by the terrible depiction of our Lord near the end. There are so many ways to portray that Jesus is there without breaking the second commandment. Or, if you aren’t as sensitive to that as I am, without making Jesus a cool American surfer guy.

So it was enjoyable and it wasn’t the book and it made a few errors. BUT, I also really loved the stories of redemption, the frequent dialog which spoke of truth and the constant pointing to the King. I cried multiple times because of the emotion that is brought out naturally seeing a story of redemption. The fellowship of the saints, the redemption of sinners, and the wisdom of our Lord Jesus Christ are all on display throughout.

Note: Only US-based bloggers and giveaway winners are eligible for the Fandango movie tickets due to Fandango limitations in Canada and outside the US.