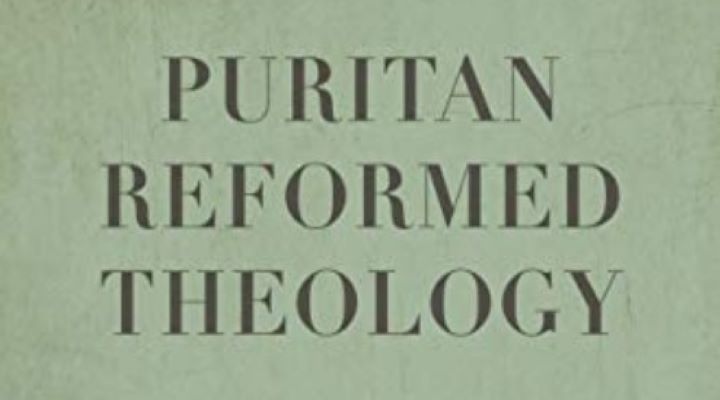 Joel R. Beeke is the president and professor of systematic theology at Puritan Reformed Theological Seminary. His other books include Puritan Theology: Doctrine for Life, Heirs with Christ: The Puritans on Adoption, and Parenting by God’s Promises: How to Raise Children in the Covenant of Grace. 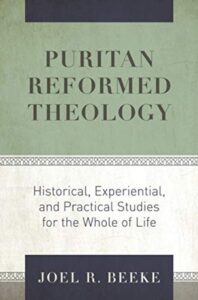 We hope that by now, most readers of Things Above Us know that the image of the Puritans as dour, legalistic killjoys is a caricature that does not line up with the experience of actually reading the Puritans, to say nothing of the historical record. In the new volume on Puritan Reformed Theology, Joel R. Beeke adds to his growing body of evidence setting the record straight about Puritanism. Beeke, one of the foremost authorities on the Puritans, originally published the contents of this book as a series of articles in the first ten years of the Puritan Reformed Journal (ix).

The book is made up of 41 chapters divided across six parts. As the subtitle reveals, the parts of the book include categories like Historical Theology, Experiential Theology, and Pastoral Theology. In addition, the topics of Systematic Theology, Pastoral Theology and Missions, and Contemporary and Cultural Issues are addressed. There is a standard Subject Index, but unfortunately no Scripture Index.

I was pleased to see the doctrine of adoption appear several times in this volume. Beeke examines adoption from a trinitarian perspective in the Biblical Studies section under chapter three’s “Our Glorious Adoption.” The author calls on believers to meditate on the wonders of being an adopted son of God (37–38). He moves on to the gracious character of God’s adoption of sinners (39–41), rightly pointing out that no one is by nature a child of God (40). As Scripture says, we are by nature children of wrath (cf. Ephesians 2:3). We require the propitiation accomplished by God the Son.

Beeke unpacks the trinitarian nature of adoption as God the Father electing and calling sinners to Himself; the Son’s perfect obedience, death, burial, and resurrection accomplishes and provides the privileges and blessings of sonship to believers; and the Spirit regenerating and transforming those children of wrath into children of God. Citing 1 John 2:29, the author connects regeneration and adoption. The adopted child of God is given a new status and a new nature. Beeke writes, “The biblical doctrine of adoption is central to a proper understanding of every major area of the Christian’s life (41).” He goes on to expound the ways that adoption transforms believers’ relationships to God, the world, the future, themselves, and the family of God (42–47).

The book’s section on Systematic and Historical Theology features a helpful article covering “John Bunyan on Justification (167–187).” Many readers will be familiar with Bunyan as the author of Pilgrim’s Progress but may not be aware of Bunyan the precise and insightful theologian. Beeke starts by recounting Bunyan’s personal experience of justification at the moment of his conversion (169). Bunyan fell under conviction of sin and recognized that the righteousness he required was to be found in Christ alone. Next, Beeke examines Bunyan’s historical context and the often heated debates surrounding justification, grace, and the role of God’s law. Beeke is careful to acknowledge that both sides engaged in name-calling and extreme language.

Beeke shows us that John Bunyan’s exacting theology of justification can be seen in the distinction he made between “positive holiness” and “negative holiness (173).” Negative holiness means ceasing from sin and transgression, while the positive type requires performing all of the duties that God’s law commands. Bunyan recognized himself to be the “Chief of Sinners,” justly condemned by the law, and in desperate need of righteousness from outside himself (175). Righteousness is accomplished by Christ through his active and passive obedience, or what Bunyan referred to as “doing” and “suffering (176).”

Bunyan recognized that Christ’s suffering on the cross was to satisfy the demands of God’s law, not to satisfy, appease, or pay ransom to the Devil (177). He affirmed Christ’s imputed righteousness as a parallel to Adam’s imputed sin (177–178). Beeke goes so far as to describe Bunyan as “an avid promoter or the forensic character of justification (178).” As an aside, Beeke includes a fascinating footnote addressing Bunyan’s differences from John Gill on the doctrine of eternal justification, but I will leave that for the reader to discover. Not content to leave Bunyan’s teaching frozen in time, Beeke helpfully applies him to modern theological controversy over the claims of the so-called “New Perspective on Paul” by NT Wright and others (182–183).

Moving into the section on Experiential Theology, Beeke looks at “Assurance of Salvation: The Insights of Anthony Burgess” in Chapter 17 (334). Here Beeke gives readers yet another Puritan gem, Anthony Burgess’s Spiritual Refining. The work was originally published in 1652 and had been lost to time and circumstance (334). Burgess, like Beeke, was careful to contrast experiential knowledge with mere head knowledge. Beeke argues that someone can possess true, justifying faith and still lack assurance of salvation (337–338).

Assurance is possible and believers are commanded to pursue it, but only because assurance is grounded in the character and promises of God. Beeke makes clear that assurance is not presumption (339–341). The reason for this is that assurance and presumption do not share the same root cause (339). The origin of assurance is the Spirit’s work producing an enlightened heart and childlike affections in the believer. In contrast, an insistence on self and the absence of experiential knowledge regarding the extent of sin are what characterize presumption.

Beeke argues for the cautious, but legitimate examination of signs of grace by those struggling with assurance (341–344). The signs of grace are, simply put, “holiness in the heart that produces holy actions (342).” He concludes his chapter on assurance with ten valuable cautions for Christians regarding signs of grace. For example, perfectionism was not in view by Burgess and is not what Beeke is arguing for. As Beeke writes, “A true Christian keeps God’s commandments (1 John 3:24), but no Christian ever comes to the point where he may say he has no sin (1 John 1:8). (344)” Interestingly, Beeke closes out this chapter by returning to the doctrine of adoption, warning Christians to not fall into the sin of doubt when the Spirit moves them to claim God as their Father (345–346).

With Puritan Reformed Theology, Joel Beeke has given the church a handy collection of his writings commending and interacting with the best of Puritan theology. Readers will find a substantial but not overwhelming amount of material to refer to for historical and theological knowledge, but more importantly, an experiential focus on the glory of the triune God. This is a resource I can see returning to again and again. Highly Recommended.