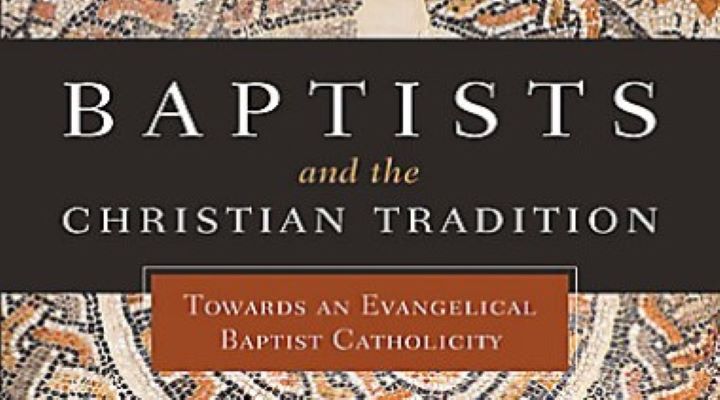 Baptists and the Christian Tradition: Towards an Evangelical Baptist Catholicity (book review)

Matthew Y. Emerson is Oklahoma Baptist University’s Dickinson Associate Professor of Religion and Director of the master’s program. His other works include He Descended to the Dead: An Evangelical Theology of Holy Saturday and The Story of Scripture: An Introduction to Biblical Theology.

Christopher W. Morgan serves as professor of theology and dean of the School of Christian Ministries at California Baptist University. He is the author of A Theology of James: Wisdom for God’s People and co-authored Christian Theology: The Biblical Story and Our Faith.

Lucas Stamps is an associate professor of Christian Studies at Anderson University. He was a contributor to the massive and fantastic volume, The Doctrine on Which the Church Stands or Falls: Justification in Biblical, Theological, Historical, and Pastoral Perspective which we reviewed here. 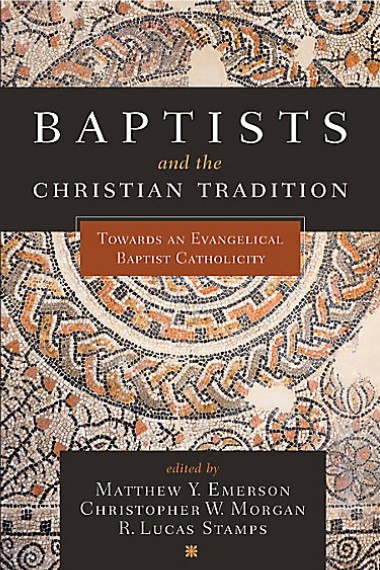 It’s been said that if you get five Baptists in a room and ask a question you will get back at least seven different opinions. What does it mean to be a Baptist? Who gets to decide? I grew up the son of a Southern Baptist preacher, was saved in an SBC church, and now find myself in that same SBC church as a deacon and lay teacher, working my way through classes at an SBC seminary. I have to confess that as a lifelong Baptist, I only recently began considering these questions.

The editors and authors of this book are not alone in arguing for the pursuit of “Evangelical Baptist Catholicity”—combining what have been assumed to be mutually exclusive categories.

Following an introduction by the editors, this book consists of 16 chapters from a variety of contributors. All of the contributors are accomplished Baptist scholars. Each chapter offers readers a look at Baptist perspectives on Scripture, trinitarian theology, the church, Lord’s Supper, and so on. After the concluding chapter, there is an appendix, standard name and subject indices, and a list of the editors and eontributors.

The editors carefully lay out their vision and major arguments for “Baptist Catholicity” in the introductory essay. They are careful to explain that by “catholic,” they do not mean submission to the Roman Catholic church or its teachings and claims to a papacy and magisterial authority. The editors use “catholic” in the historical context of the “universal” or “whole” church (3). In that sense, “Baptist Catholicity” represents the desire for a distinctively Baptist vision within the universal church.

In the opening chapter, Morgan and Kristen A. Ferguson argue that God calls us to a unity that is—like the sin we are redeemed from—personal, communal, and cosmic (7–9). This does not exclude the ways in which unity is also covenantal, transcendent, missional, and inaugurated (9–18). Ironically, Baptist unity is demonstrated by the many confessions of faith they have drafted and affirmed over the centuries, including the First and Second London Baptist Confessions of 1644 and 1689, respectively, and the revisions to the Baptist Faith and Message in 1925, 1963, and 2000. Morgan and Ferguson single out the 1689 as the confession that “stands head and shoulders above the others in terms of coverage and depth on the unity of the church…” (24).

Next, Rhyne R. Putman explores “Baptists, Sola Scriptura, and the Place of Christian Tradition.” Putman charts Baptists’ shifting views of the nature and authority of the Bible and its relation to tradition. The author proudly identifies as a biblicist, but not with a “naïve biblicism” that completely discounts the role of history and tradition in how the Bible is to be understood and applied (29). Borrowing from Timothy George, he helpfully describes the Campbellite position as “nuda scriptura” over and against the historic Reformed view of sola scriptura.

The often contentious nature of communion is ably handled by Michael A.G. Haykin with his chapter on “Baptists, the Lord’s Supper, and the Christian Tradition.” As he points out, the Second London Baptist Confession of 1689 marked a significant shift away from describing the Supper as a “sacrament” as per the Westminster Confession and Savoy Declaration, and towards the idea of an “ordinance” instead (207–208). The Second London also omits Luther’s view that the body and blood of Christ are “in, with, and under” the bread and wine (208–209). Haykin offers several examples of early Calvinistic Baptists who saw the Lord’s Supper as a memorial, and yet more than merely a memorial. They believed that the Supper offers spiritual nourishment, the real spiritual presence of Christ, and a feast for the people of God (213–215).

David Dockery addresses the ways that Baptists relate to broader evangelicalism with “Southern Baptists, Evangelicals, and the Christian Tradition” (270). Since the 1980s, Baptists have debated the question of whether Southern Baptists are evangelicals at all. If evangelicals are, as Dockery defines them, simply Christians who affirm the authority of Scripture and the gospel message of faith alone in the person and work of Christ, then Baptists can safely be counted as evangelicals (279). At the same time, the author is careful to identify the weaknesses of evangelicalism. With no formalized confessional or regulatory body to point to, evangelicalism has existed as a disorganized movement across denominational lines (280–281). Dockery concludes with a call for believers to recognize demonic activity, secularism, and unbelief as the true enemies, not other Christ-followers (290). As he puts it, Baptists as evangelicals should commit to “gospel commonalities” with other groups without abandoning their Baptist distinctives as a denominational body.

Baptists and the Christian Tradition offers ample material contributing to the conversation of what it means to be an evangelical, committed to the church catholic. It is not an exhaustive treatment of modern Baptist identity, but it certainly moves the conversation forward in some important ways. If Baptists are truly “evangelicals,” how much interdenominational unity can they have and still remain truly Baptist? Will the big umbrella approach of the Baptist Faith and Message 2000 be enough for Baptists in the SBC to rally around? Should Baptist churches look to the past at more exacting confessions like the Second London? No matter where you land on these questions, it would be a mistake to ignore the insights from this book. Recommended.