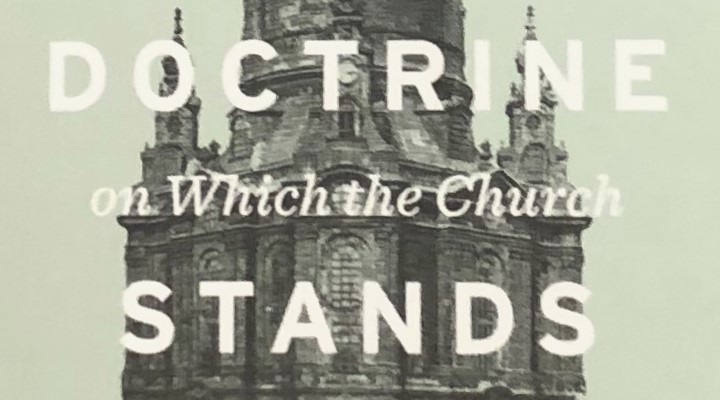 Book Review — The Doctrine on Which the Church Stands or Falls

The Doctrine on Which the Church Stands or Falls: Justification in Biblical, Theological, Historical, and Pastoral Perspective.

Barrett, Matthew ed., The Doctrine on Which the Church Stands or Falls: Justification in Biblical, Theological, Historical, and Pastoral Perspective. Wheaton: Crossway, 2019, 912 pp. $60.00 Matthew Barrett is an associate professor of Christian Theology at Midwestern Baptist Theological Seminary. He is executive editor of Credo magazine and host of the podcast by the same name. He served as editor of Reformation Theology: A Systematic Summary and co-editor of the Reformed, Exegetical and Doctrinal Studies series. He is the author of None Greater: The Undomesticated Attributes of God and God’s Word Alone.

The Doctrine on Which the Church Stands or Falls takes its title from the Reformation era conviction that justification by faith is the dividing line between the biblical gospel and man-centered efforts to earn favor with God. Matthew Barrett serves as editor and co-author with several significant theologians. In the forward, D.A. Carson writes that nothing is more important than the subject of this massive volume (15). The book is organized into four parts, grouping the chapters by looking at justification according to what the Bible itself teaches, theological perspectives on the doctrine, church history, and pastoral practice.

In part one, Stephen Dempster explains how justification is in the Pentateuch (41-66). Harman then covers the Psalms and Wisdom Literature (67-98), followed by VanGemeren’s look at the Prophetic Perspective on the doctrine (99-146). Robert Cara then closes out the OT with his chapter on some erroneous claims about what Second Temple Judaism was really like (147-178). Justification in the NT is then introduced by Brian Vickers’s chapter on the gospels (179-212). Andrew Naselli and Brandon Crowe handle Romans and the remaining letters of Paul respectively (213-272). The alleged conflict between Paul and James on justification is explored by McCartney (273-294). The errors of the so-called “New Perspective on Paul” (NPP) and the path forward are then addressed in Laato’s and Shaw’s closing chapters for this first part of the book (295-347).

In Part Two, the authors shift to justification from various theological perspectives. Stephen Wellum begins this section with theology proper and the atonement (351-386), followed by Barrett’s work on various “contours” (387-418). Thompson, Crowe, and VanDrunen then move on to explore how faith, the active and passive obedience of Christ, and the believer’s union with Christ each inform our understanding of justification (419-504). The chapters by Stamps and Meyer then conclude part two by looking at faith in relation to works and the believer’s relationship to the law and status under the New Covenant (505-560).

Part Three of this volume makes justification in church history its focus, beginning with Bray’s defense of the orthodoxy of the Reformed understanding of justification (563-586). Needham, the editor, Maas, and Fesko then move on to Medieval and Reformation era concerns (587-738). Roman Catholic, Enlightenment, and Post-Enlightenment formulations then conclude Part Three (739-807).

Part Four deals with the importance of pastoral concerns about justification with two chapters. Castaldo looks at explanations for the appeal that Roman Catholicism seems to hold for some people (811-838). The final chapter, provided by Sam Storms, argues for justification as a necessary concern for the pastorate (839-866). The end of this massive volume consists of information on the contributors, followed by standard general and scripture indices (867-912).

The length and depth of this book make giving a complete overview just about impossible. Remember, this is over 900 pages of material. We will take a look at some sample passages from the different sections to provide a taste of what the book has to offer. Barrett’s introduction lays the groundwork for why theologians should concern themselves with what he wryly calls “The Foolishness of Justification” (23-37). The author provides a helpful birds-eye view of the concerns that will be more fully explored in the rest of the book. Harman’s interaction with the idea of justification as taught in the Book of Psalms makes some unexpected connections between passages in the Old Testament. For example, the Exodus is linked to Psalm 145 as a demonstration of God’s character, which then points us to the necessity of being justified by him (69).

Anyone who has ever struggled to reconcile Paul and James will be helped by Dan McCartney’s chapter. After coming at this question from various angles, including a literary framework, the author shows us how Paul and James are in harmony with each other. Paul and James are distinctive but consistent about justification. Paul is explaining what it means to be justified before God. James answers the question of how we are “justified” in the sight of man, in the sense that works prove our faith is real (291). Readers will also benefit from a careful reading of Timo Laato’s critique of NT Wright’s “New Perspective on Paul”. Wright’s thinking on justification is complex (or convoluted depending on your tastes) but Laato explains that it all boils down claims of a works-based “future justification”, where a person is right with God based on their entire life lived, not on the imputed righteousness of Christ (317). Ironically, the “New” Perspective on Paul ends up falling into some old errors the church has dealt with for hundreds of years (323).

In Part Three, students of church history will enjoy Nick Needham’s clear writing style. He shows us the thread of justification running from Augustine to Theophylact of Ochrid (587-621). This makes for an appropriate introduction to the deep dive into the treatments on the Medieval and Reformation eras in the chapters which follow. In particular, J.V. Fesko’s treatment of the debates over Richard Baxter’s orthodoxy on justification proves to be particularly significant (721). Anyone who ministers in a Roman Catholic context will find Castaldo’s work gracious and nuanced while remaining committed to Reformed convictions (825-828).

Editor Matthew Barrett’s The Doctrine on Which the Church Stands or Falls is a theological feast. And like a feast, I recommend you take your time and chew on it slowly. The biblical teaching on justification is defended and unpacked by an impressive list of contributors. This book will prove to be a valuable resource for students of theology or anyone seeking to gain a full-orbed understanding of how sinners are made right with God.