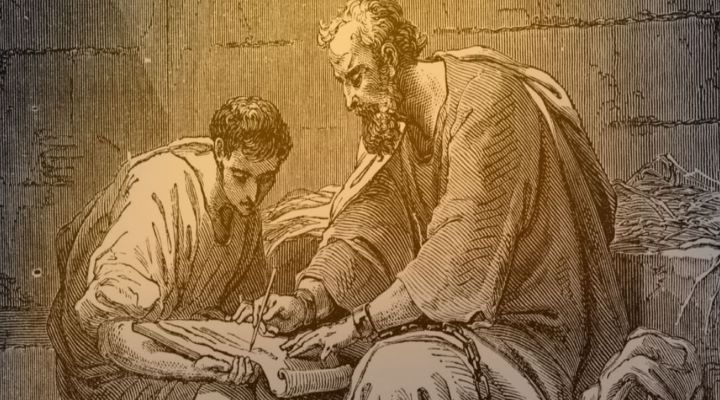 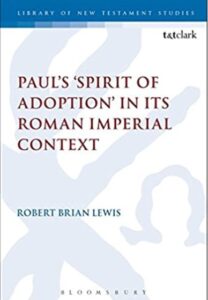 The doctrine of adoption has been a neglected topic of theology for too much of Christian history. As we have argued here, Scripture and our most cherished theologians past and present have much to say about the glory of God the Father’s grace in adopting sinners as His children by the work accomplished by God the Son through God the Spirit. The Apostle Paul wrote some of the most important passages which teach us about spiritual adoption. What did Paul mean by the phrase “Spirit of Adoption” in Romans 8? In Paul’s ‘Spirt of Adoption’ In Its Roman Imperial Context, Robert Lewis has carefully studied this question and I am thrilled to finally have the chance to review it.

The book is made up of 6 chapters, beginning with the debates surrounding the “Spirit of Adoption” in question and the author’s chosen methodological concerns (1-18). In the second chapter, Lewis surveys modern scholarship on Paul, First-Century politics, and Roman religion (19-42). Chapter 3 begins Lewis’s own work, examining political, religious, and familial life in Imperial Rome (43-96). Next, Paul’s use of household imagery in Romans 1-8 is addressed (97-152). With 5 chapters’ worth of groundwork laid, the author makes his case in the final chapter for how we should understand the Spirit of Adoption with its Roman Imperial context in view (153-195).

One of the main clues provided by Lewis in this book is the idea of the Roman “genius.” Rather than a highly intelligent person, “genius” in this context had to do with the spirit of a Roman family. The Emperor was said to have a “genius” (personal guardian spirit) and a “numen” (divine power), two concepts that may have informed Paul’s thinking in Romans 8 (58). The Roman genius of Paul’s day would have been understood as a spirit within the head of a family, but also each family member’s divine or spiritual part, and the “genius” of the Emperor who was to be worshiped (59). Lewis points out that when Paul makes use of the Greek word pneuma, there is more being communicated than the Latin spiritus, which can refer to wind, breath, or even a “soul” but not deity (58-59). Is it possible Paul’s original readers were intended to understand “adoption” through these parallels between Roman culture and the Triune God of Scripture?

Father Abraham Has Many Sons

How should we understand Paul’s appeal to the seminal Old Testament figure of Abraham? When Paul refers to Abraham as “our father”, who is he including? Jews or Gentiles? Lewis persuasively argues that Paul’s intent was the present Abraham as the father of Jews and Gentiles alike (108-110). Abraham’s faith that brought him God’s gracious declaration of righteousness came prior to the law or covenant sign of circumcision (110). As the author puts it, “Abraham is paradigmatic of everyone who has faith in God.” (110).

The Spirit of Adoption

The author affirms an “already and not yet” perspective when it comes to adoption in relation to the whole of salvation. There is in Paul’s teaching a “future aspect of the present adoption (192-195).” Ultimately, adopted believers are to be conformed to the image of the Father’s Son. As Lewis puts it, “Paul’s gospel announces that God is unwilling to be the Father of an only son (193).” The Roman Imperial religious, political, and social context of “adoption” in Paul’s day served as a means to point his readers to the resurrection of Jesus Christ and the outpouring of the Spirit (195).

Paul’s ‘Spirit of Adoption’ In Its Roman Imperial Context is one of the most important works addressing the doctrine of adoption. I have been studying this doctrine and collecting resources on it for about 7 years now. I was pleased to see that Lewis put together a bibliography which references several resources I had not come across yet. To be clear, this is an academic level work, so I would not necessarily pick it up for light reading. That being said, I encourage anyone who is interested in spiritual adoption to add this book to their theological library. 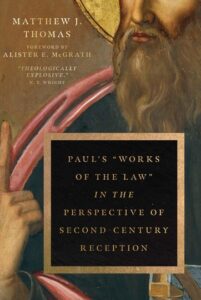 Matthew J. Thomas (D. Phil – University of Oxford) serves as assistant professor of biblical studies at the Dominican School of Philosophy and Theology and as a theology instructor at Regent College. His academic research has focused on Pauline theology and the Church Fathers.

As confessional Protestants, we are convinced that the Reformation was nothing less than a recovery of the Bible’s teaching about how we are declared to be right with God. In short, justification before God is by grace alone through faith alone in Christ alone and works do not contribute or add to our salvation in any way but are instead evidence that saving faith is genuine (see Ephesians 2:8-10). Over the past 50 years or so, theologians concerned about preserving the doctrine of justification by faith alone began to be confronted with a so-called “New Perspective on Paul.” What was Paul responding to in his letters to the early church? Have we have bought into a caricature of First Century Judaism as teaching a legalistic, works-based salvation?

We at Things Above Us have addressed the NPP in several podcasts, articles, and book reviews which you can find here. The debates between the “old” and “new” perspectives seem to have faded from broader evangelicalism but they have not cooled down as much in academic circles. In Paul’s ‘Works of the Law’ In the Perspective of Second-Century Reception, Matthew J. Thomas takes a unique look at the debates over NPP.

Paul’s ‘Works of the Law’ was first published by Mohr Siebeck, and has now been published by IVP in the North America for the first time. The book’s 12 chapters are organized into 4 parts. The author lays out his primary aims for this book early on in Part I: Introduction (3-28). First, how were ‘works of the law’ understood by the Second-Century church fathers up to Irenaeus? Second, how do these understandings inform the ongoing debates between “old” and “new” perspective advocates? Finally, what can we legitimately infer from these perspectives about Paul’s intended meaning of ‘works of the law’? From there, Thomas explains the theories, methodologies, and terms he used.

In Part II: Old and New Perspectives on Works of the Law, the author allows Luther, Calvin, Bultmann, and Douglas Moo to make their case for the “Old Perspective” (29-48), followed by the usual suspects Sanders, Dunn, and Wright in favor of the “New Perspective” (49-78). Part III composes the largest section as the author moves on to early perspectives, beginning with the Didache and various epistles and apologies (79-263). Finally, in Part IV, Thomas lays out his conclusions on each group of perspectives (265-289). Standard bibliography and indices are included, in addition to indices of Classical, Jewish, Patristic, Medieval, and Reformation literature and texts (290-328).

Why Does It Matter?

It may be tempting to dismiss a book like this as an irrelevant, ivory tower babble for theology nerds. Who cares what a bunch of dead guys in the Second-Century thought? Shouldn’t we just read the Bible and ignore everything else? While there is a danger of making anything into an idol, including theology, it would be a mistake to be unconcerned about the questions this book is asking. None of us reads the Bible in a vacuum and I doubt I will ever ask a question about Scripture that someone much smarter than me has already tried to tackle.

If nothing else, this book was thoroughly and carefully researched. Thomas helpfully summarizes the various theologians and authors from the various perspectives on works of the law. I also appreciated the format that the author used to organize his concluding chapter. Similar to an attorney wrapping up his case in closing arguments, he groups his “evidence” into direct evidence, supporting evidence, circumstantial evidence, and what he calls “unclassed sources” (265-271). He is also careful to admit that the early fathers were not in complete unison on these questions.

Given how much careful interaction Thomas has with OPP scholars, I was disappointed to not see some of the more prominent members. For example, he makes no mention of Michael Horton’s Justification – Two Volume Set, or editor Matthew Barrett’s massive The Doctrine on Which the Church Stands or Falls: Justification in Biblical, Theological, Historical, and Pastoral Perspective which I reviewed here.

So did the early fathers affirm a 2-stage view of justification? Thomas argues that they did in fact take this position. A sinner’s justification before God was thought to initially be declared by grace, but there is also a final judgement based on “outworking of this grace in one’s subsequent life (279).” While some modern scholars have affirmed a final “vindication” of sinners in which works confirm the faith that was there at the beginning, this is not view of the early fathers, according to Thomas. In their view, the final judgement is “contingent” on obedience (279n14). In other words, they held the view favored by NPP scholars like N.T. Wright who declared this book to be “Theologically explosive.” Understandably, Thomas reported the feedback he got on the first publication involved questions surrounding this issue (xv).

Paul’s ‘Works of the Law’ In The Perspective of Second-Century Reception is an important contribution to the back and forth between OPP and NPP proponents. Agree or disagree with them, it matters what the earliest Christians believed about our relationship to God’s law and what we think about God’s standards and expectations for us as His creatures. This book will serve as an important resource in these debates.