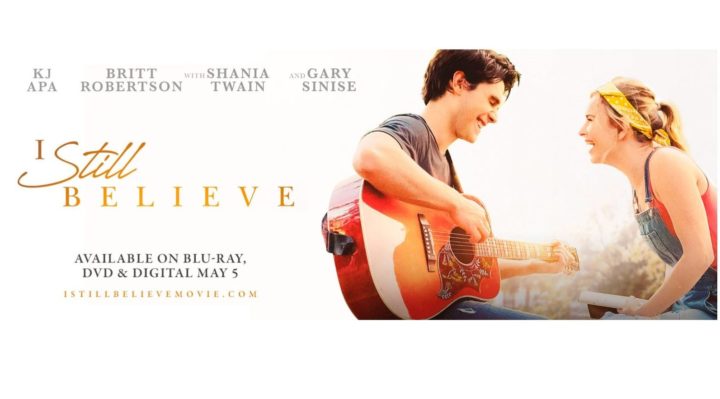 Jeremy Camp is a singer and songwriter who is popular in the Contemporary Christian Music scene. I believe his music is more Christ-centered and explicitly Christian than most of what is produced in the 21st century under the heading of “Christian.” To my knowledge, he hasn’t disqualified himself or brought public reproach on Christ, which means he has outshined most other Christian artists. If you are familiar with his story, then you already knew to grab a box of tissues before you watch the movie. I Still Believe is based on the title of one of Camp’s songs, and is a ballad to God about how even in difficult circumstances when he doesn’t understand God’s plan, he still trusts God is faithful and good. In general, Camp stands out because his songs cannot be mistaken for being about his girlfriend instead of Jesus.

Click here to ignore the review and just enter the giveaway. Let’s Review the Movie, (I promise, no spoilers)

I definitely can give this movie 2 Thumbs Up. It’s kid-safe—no swearing or immodesty or violence. Other than a few kisses between the lovebirds, there isn’t so much of a suggestion of evil. It’s an emotional roller coaster though…so be prepared for an up and down ride with the Camps. The story begins when Jeremy goes to college and covers about 5 years of his life. The movie could have been called “Melissa’s Story,” because of the focus on Jeremy’s love interest. Sprinkled throughout the movie are bits and pieces about his career, but if you were looking for the rise of Jeremy Camp to stardom, this movie isn’t the place.

The acting was sufficient. The characters needed to express a ton of emotion and the two main characters did that well. Supporting roles from Shania Twain and Gary Sinise were well placed, too. I felt like the movie was “choppy” as it went from scene to scene at times, but they were trying to tell a long story in a short time. Overall, the message that God is always good even when His people suffer shined through without apology. This is not a health and wealth gospel movie; it’s a story of a woman who had admirable faith. Melissa Camp expressed a willingness to endure affliction if it was what God wanted for her and if it would help someone else.

Her goal was accomplished and this movie simply expands her reach!

At times I had to strain to hear the dialogue, especially while there was background music. I don’t know if that is the result of watching a review copy of the movie, but it could be frustrating for people in a home with other noises or trouble hearing in the first place.

I stand by the statements I made in my review of I Can Only Imagine. This movie falls short of presenting a clear gospel. You could argue it became more about Melissa or Jeremy than about Christ. I think this is a failure, especially considering Jeremy was an executive producer. In one key scene where Jeremy’s dad, a minister, was counseling Jeremy, there was a missed opportunity to present Christ clearly. To the extent they stuck true to the true story, I would have hoped for at least one chance to clearly present Christ and use his name more. Like modern Christianity, this movie suffers from the “talks about God a lot but not about Jesus” syndrome that drives me bananas.

You Can Win This Movie and Ask Jeremy a Question!

Bloggers in the #BelieveL3 campaign that I’m participating in are going to be able to submit questions to Jeremy and his wife to answer in a Q & A session. So leave a question here in the comments and I’ll pass it on to the marketing experts who are managing that.

Enter this contest to win the movie yourself (plus a few other goodies), or consider just purchasing it. It’s available already wherever you catch flicks these days…