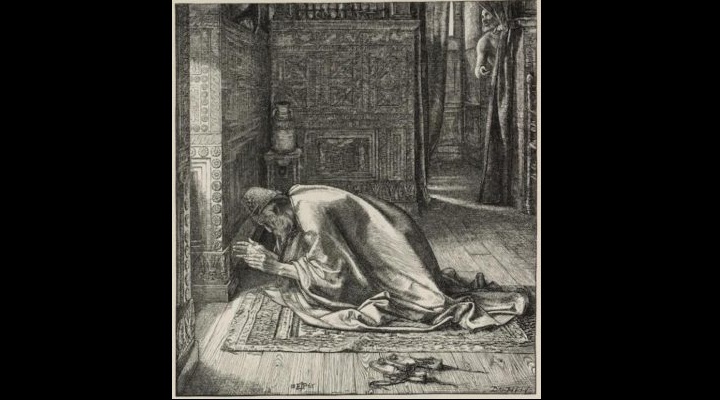 “When Daniel knew that the document had been signed, he went to his house where he had windows in his upper chamber open toward Jerusalem. He got down on his knees three times a day and prayed and gave thanks before his God, as he had done previously.”
– Daniel 6:10

This article is not what you think it is. If you’re like most American Christians right now, there are many who are seeking answers from Scripture as to whether it allows us to “defy” our government. And a key verse that many on either side go to is Daniel 6:10. But whether you believe we can take up arms against our government, or rally in civil protest, I submit to you that there is a deeper, more enduring, truth that I believe Daniel is teaching us in this particular passage.

As usual, context is the pacesetter. It aids our understanding of the circumstances surrounding a particular situation. In this case, Daniel had risen to such a position in leadership that the other high officials and governors sought to find a scandal against him (v4). Presumably because of jealousy. And soon, he would be given authority over the whole kingdom. There was just one problem: “they could find no ground for complaint or any fault, because he was faithful, and no error or fault was found in him.”

And because they could not find a scandal against him, they decided to create one. And they knew that the only way they could find “fault” was to create a situation where he would have to choose between the law of the land, or the law of God (v5). And so they managed to get King Darius to issue a decree “that whoever makes petition to any god or man for thirty days, except to you, O king, shall be cast into the den of lions.” (v7) They knew it wouldn’t take long for Daniel to make the “wrong” choice.

Now the stage is set! And as our key text says, Daniel knew that the document had been signed. But instead of going before the king and pleading his case, which he would have had absolute freedom to do, he went to his upper room, opened his windows toward Jerusalem, and prayed three times a day, and gave thanks to God as an act of defiance against his conspirators! No, wait. That’s not what the text says. It says that Daniel did just “as he had done previously.”

The key lesson that we must learn here is that Daniel wasn’t acting in defiance in the way we Americans typically define it. He didn’t publicly call out the injustice of the decree, although he would have had full justification in doing so. He didn’t take up arms against his conspirators, nor rally a protest, though speculatively, he might have managed to do so. But instead, Daniel chose to do what he had already been accustomed to doing. Nothing different. Nothing revolutionary. Just faithful, humble, and consistent devotion to God.

And of course, his conspirators knew this would happen. But this is what makes this lesson so profound. Despite Daniel also knowing what was happening, he chose to do what he had always done, and not use the power vested to him to take matters into his own hands. This passage isn’t meant to teach us whether we should engage in peaceful protest like some use it for, nor especially imply armed defiance against an unjust government. It teaches us that we are to live before God with such consistency, faithfulness, and devotion, that when the time comes to act in humble defiance against men and governments who conspire against us, they would expect nothing less. Which, in the end, will put them to shame (1 Pet. 3:16), having nothing evil to say of you (Titus 2:8).

Have we already been faithful and disciplined in our devotion to God? Or are we caught up in the hype of just “losing our freedoms”? Are we endeavoring to demonstrate godliness at this time because that’s what we’ve always done? Or are we just trying to make up for lost time, having lived unfaithfully to Christ’s commands? Have we been already publicly devoted to Christ in such a way that would it be easy to identify us as Christian? Or is it hard to tell the difference? Have we been sharing our faith regularly, consistently, and purposefully? Or are we only irrationally fearful to lose our religious freedoms?

Daniel’s purpose was not to act defiantly against Darius or his conspirators. He acted faithfully, consistently, and devotedly, as he already had been doing.

The key issue that I am emphasizing is this. If you haven’t already been exercising godliness through private and public devotion to God, and gospel proclamation to men, if the time has now come where you now feel compelled to rally in defiance to our corrupt government, it’s hypocritical. Not trying to be senselessly abrasive or sensationally jerkish. I just pray the Holy Spirit will make us aware of how much deeper our consistent faithfulness to Christ really goes.

Some of us should be concerned that we are losing our freedom to speak as Christians in America. But if we have neglected that right to preach the gospel regularly to friends, family, and strangers, then what good is it to fight for a right you don’t use? Others also should be concerned that our religious freedoms are being infringed upon. But if the local church and our own devotion to Christ weren’t taken that seriously anyway, then why does it matter if you possess that right? Virtually nothing will change for most in American evangelicalism whether we have them or not.

What makes Daniel’s situation unique is that his defiance wasn’t just so he can stick it to his conspirators. His defiance wasn’t manifested in the form of demands, or a battle cry against an obviously idolatrous nation. His defiance was much stronger, and more powerful than an armed militia could ever enlist in a single revolution — because it was grounded upon a kneeling faith in Yahweh the LORD of hosts. And like our LORD Jesus, Daniel committed himself to him who judges righteously (1 Pet. 2:23).

I pray we would all take Daniel’s humble defiance to heart, take advantage of the time to commune with God in prayer, zealously seek his grace, and endeavor to walk worthy of the calling he has called us to.

– Until we go home