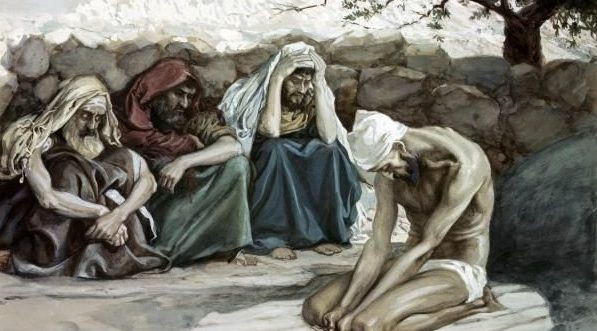 The book of Job is best known for Job’s patience in enduring a multitude of difficult trials. The destruction of his property to the death of his children to his being inflicted with a skin disease and finally to the harsh rebukes from his friends. In the end, Job remains faithful to God (after God asks him a few dozen questions to remind Him who is the sovereign one and who is the created one) and it’s an amazing reminder of God’s faithfulness, His grandiose nature, and the lengths to which we can overcome when we remain faithful to God. In the final chapter of this historical book we read quite clearly the issue God took with Job’s friend’s poor advice:

Job 42:7
It came about after the Lord had spoken these words to Job, that the Lord said to Eliphaz the Temanite, “My wrath is kindled against you and against your two friends, because you have not spoken of Me what is right as My servant Job has.

Interesting, is it not? It’s not necessarily that Job’s friends were unkind to Job or that they just didn’t comfort him in the right way, it’s that they misrepresented God and said things about God that were untrue. Their misrepresentation and inaccurate speech resulted in their being unkind and a source of discomfort to righteous Job. They repeatedly said things about God they presumed to be right. They said God was punishing Job for something he did. It’s alarming how closely comfort is connected to sound theology.

Had Job’s friends rightly represented God then Job could have been comforted but instead, he was turned into a hot mess. I wonder for ourselves how often we misrepresent God (intentionally or not) and we end up making someone in distress more uncomfortable than they should be. A brother who has just lost his job due to circumstances beyond his control would not be comforted to hear that you are convinced he lost his job because he’s a bad worker or that if he were a better employee he’d surely still be employed and that this situation is clearly an indictment from God about the company the man worked for.

Our attitude should be to always speak rightly about God. We should always, when speaking of God, say words that reflect the word He’s given us in the Bible. He has written a book revealing who He is, we are obligated to represent that book as best as we possibly can in all circumstances — even in the midst of suffering and even when we’re convinced we know what “actually” happened or why it “actually” happened.