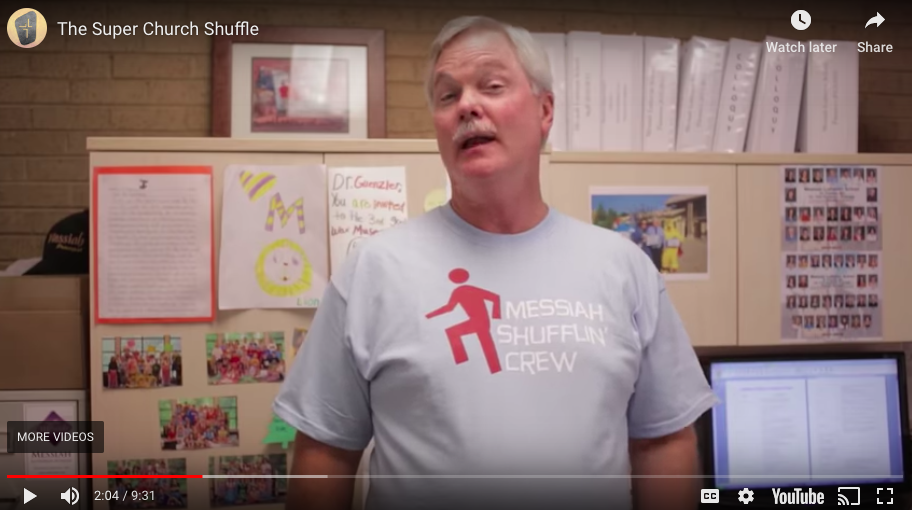 In “Here and There,” we’ll take a brief look at some things I like, random and important news in the Evangelical, political, and sports world.

It’s been way too long since I’ve done one of these, so here we go. In this edition of “Here and There”:

The first 30-seconds or so are pure gold, but Dr. G at 2:03 makes me laugh so, so hard. He’s the star and deserves a Tony. A bit of advice, though: don’t do these…exactly 100% of them are cringeworthy and do not make me want to attend your church. They do make me miss all of those Christian t-shirts that took logos from every day products and converted them to Christianese. I owned this one. We all sort of saw this coming, didn’t we? He’s besties with Mark Driscoll, has a long history of bullying his staff, displaying a bombastic personality, and seeking attention and popularity (remember that stunt he pulled with Driscoll at The Shepherd’s Conference years ago?). Oh, and did I mention he’s Mark Driscoll’s friend???

As predictable as this was, there’s a real church, with real elders, and real sheep involved who need prayer.

“Following a lengthy season of review, reflection, and prayerful discussion, the Elders of Harvest Bible Chapel had determined that Pastor MacDonald should be removed from his role of Senior Pastor. That timeline accelerated, when on Tuesday morning highly inappropriate recorded comments made by Pastor MacDonald were given to media and reported,” they wrote.

“This decision was made with heavy hearts and much time spent in earnest prayer, followed by input from various trusted outside advisors.”

According to his website, “In 2002, James founded the church-planting network Harvest Bible Fellowship. Under his leadership, more than 170 vertical churches have been planted on four continents. He continues to recruit, train, and equip pastors to plant Vertical Churches through Mission Harvest and the Vertical Church Pastor Training Center.

He began the Bible-teaching ministry Walk in the Word on one station in 1997. Now, Walk in the Word can also be seen on television and online, reaching more than three million people around the world every day.”

Julie Roys, who has published articles on Christianity Today, WORLD Magazine, The Federalist, Religion News Service, and The Christian Post, has been following and reporting on James MacDonald for years. She writes with relief and a bit of closure on the James MacDonald firing: “No longer can he prey on the sheep he was supposed to protect.  No longer can he use church members’ money to line his pockets. No longer can he rage on innocent employees and get people to believe the lies he’s spread about those who challenge him.”

She writes, “One person whom MacDonald led to the Lord recently remarked to me, ‘It’s like finding out your wife is a serial killer.'”

I’m familiar with this sentiment, and it comes from betrayed trust. This is such a sad deal, but all too common. We must commit ourselves to holy contentment in whatever the Lord has given us — especially those in ministry.

Modern church growth techniques are such a sham. More strobe lights! Better music! Tighter jeans! The modern “church’s” attempts at being “relevant” or “cool” by borrowing from the world is so tired and old. It’s easy to trick unsaved people into your building, sign them up for a bunch of “ministry” opportunities, and make them feel like they’re in a hip club. You know what’s hard though? “Equipping the saints for the work of ministry” (Eph. 4:12); teaching people to die to themselves (Lk. 9:23); discipling every member in the congregation. That’s hard work.

My favorite points from Aaron:

The Chibok Girls: Survivors of kidnapping by Boko Haram share their stories

From CBS News: “Imagine your teenage daughter was kidnapped while studying for her exams at school. And not just your daughter, but hundreds of girls in your town taken in the night. The families of Chibok, Nigeria lived through that nightmare almost five years ago when the Islamic terrorist group Boko Haram – whose name roughly translates to “western education is forbidden” – attacked a local school and ran off with 276 girls. Some escaped, but it took the Nigerian government three years to negotiate the release of fewer than half of them.”

Rejoice and pray for these ladies!

More Here and There: