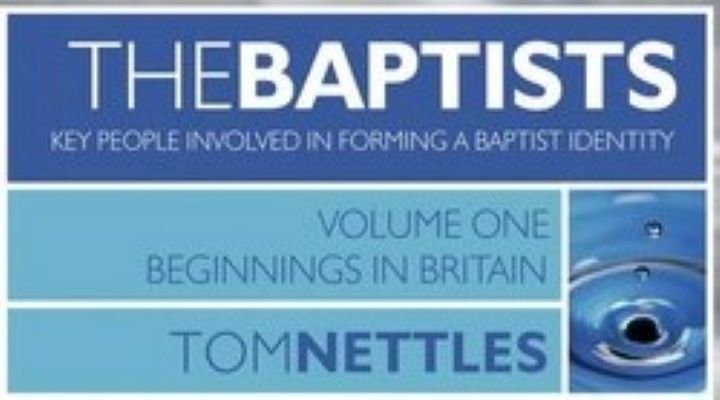 Tom Nettles is a widely recognized Baptist historian. He previously served as Professor of Historical Theology at the Southern Baptist Theological Seminary.  His other works include By His Grace and For His Glory: A Historical, Theological, and Practical Study of the Doctrines of Grace in Baptist Life and Living By Revealed Truth: The Life and Pastoral Theology of Charles Haddon Spurgeon.

The question of what it means to be a Baptist has been debated and reevaluated for as long as Christians have claimed the title of Baptist. Over the past few hundred years, questions about individual religious freedom, the role of government, proper church order, and yes, the mode and recipients of baptism have all been of concern for Baptists. Tom Nettles has given us one of the most important resources for Baptist history with his three-volume set, The Baptists. In this review, we will look at Vol 1: Beginnings in Britain.

The author starts Section I of this first volume by laying out what he sees as the two main competing paradigms for Baptist identity in the past century (11-13). First, there have been those who see “soul competency” or “soul liberty” as the primary concern. They tend to be opposed to formal statements of faith as improper restrictions on individual interpretation. The “soul competency” group has also been characterized by the Landmark movement which dubiously claimed that modern Baptists could be traced back to the early church. Nettles assessment is that “Many of the groups denominated Baptist by those seeking a chain of perpetuity simply do not pass muster theologically as Baptists if defined by in terms of the many confessional statements of the seventeenth century.” (12).

The second view of Baptist identity is the one held by Nettles, which he calls the “coherent-truth” model. Theology is primary for this group, not individual autonomy. The person and work of Christ and the nature of salvation take center stage. Nettles argues that this view is the most consistent with the revealed truth of Scripture. As he puts it, “Baptists must be Christian and Protestant evangelical before they can be Baptist.” (13).

The author moves on to give us a brief survey of Baptist historical works so far, many of which support the coherent-truth view (13-27). Some readers will be surprised to learn that early Baptist historians like Thomas Crosby saw believer’s baptism not as an innovation, but as a natural outworking of the regulative principle (14). Baptists were unique in their promotion of religious liberty, but this was also derived from Scripture (16). Nettles explains how a shift began around 1907 when E.Y. Mullins presented “competency of the soul” over and against Roman Catholic claims (23-24). I was surprised to learn that Mullins never intended for soul competency to be the defining tenet of Baptist identity. The progression towards anti-confessionalism by Whitley and others may have been an unintended consequence of soul competency (25-26). In the end, the author persuasively reclaims Mullins for the coherent-truth camp (25).

Nettles then enters into more recent concerns over identity that are related to fundamentalism and the inerrancy debates (27-33). The second chapter concludes this first section of the book and serves to drill down further into the coherent-truth framework. Nettles casts Baptist identity in terms of orthodoxy, “evangelical” in the sense of gospel focus, biblical church polity, and holding to confessional convictions. Dr. Nettles would go on to cover more recent Baptist happenings in greater detail in Volumes 2 and 3 of the series.

Section II of this book begins the historical study itself, starting with John Smyth (53-69. Smyth lived until the early 17th Century and is often credited with being the first “Baptist”, yet Dr. Nettles explains how that title is more than a little complicated. For starters, Smyth was never baptized by immersion or even argued for the practice (53). Smyth’s move towards believer’s baptism began as anti-paedo baptism, but not a move away from covenant theology per se (61). He saw redemptive history in terms of a carnal Old Testament and spiritual New Testament.

Finding the “Baptist” John Smyth (died 1612) is dependent on which stage of life we find him in. His early life and theology was characterized by the Puritanism of William Perkins (54). In later life, Smyth experienced a conversion to faith in Christ and was baptized by pouring, an event he subsequently repudiated in addition to the baptisms he performed on others. He wrestled with questions of proper worship, eventually arguing against “any human work” including even translations of the Bible (60). While Scripture was to be read and studied, Nettles explains that “it cannot be proved, according to Smyth, that a book was ever made use of for prophesying in true Spiritual Worship.” (60-61). He started a church but then shut it down and tried to join a group of Amsterdam Mennonites. Again, Smyth’s legacy as a Baptist is far from nice and neat.

The author prefaces the third and final section of this book with the short chapter “Mature from the Start.” He explains the rise of the Particular Baptists in terms of in the context of Reformation-era convictions and Puritan dissent (111-112). Nettles continually returns to the primacy of sound doctrine in the life and development of Baptists. For example, Benjamin Keach (1640-1704), like many in his day recognized a covenant of redemption within the Three Persons of the Godhead (166-168). The covenant was dimly revealed in the Old and fully revealed in the New. In a similar way, Keach’s theology of assurance was inseparable from the Holy Spirit’s testimony that the believer is a child of God via adoption (181, cf. Romans 8:16-17).

Dr. Nettles’s writing style is what I would call grounded eloquence. Somehow, he manages to balance language that is sophisticated and articulate without becoming pretentious and impossible to follow. One of the unique features of this book which I found helpful was a series of text boxes with mini-biographies or explanations of specific topics such as “Calvinism” (55), “Anabaptism” (62), or “Socinianism” (106). The author’s son, Robert Nettles contributed sketched portraits of notable Baptists like Dan Taylor (94), John Gill (194), Andrew Fuller (244), and William Carey (280).

A feature I did not find so helpful was the choice to use endnotes instead of footnotes. While I am sure there were editorial factors that went into going with endnotes, having to flip back and forth tends to disrupt the flow of reading for me. For example, in a fascinating discussion on Andrew Fuller’s view of the atonement, there are endnotes which go on for almost an entire page each (eg. 257n25; 361). None of these features were deal breakers for me and will likely not be an issue at all for many readers.

The Baptists – Vol 1: Beginnings in Britain is one of the must-have works of Baptist history by one of the sharpest Baptist historians the church has been blessed with. As a lifelong Baptist myself, I have been forced to reckon with the sometimes confusing and not so great figures in my theological family tree. Dr. Tom Nettles has served as a sometimes bluntly honest but still hopeful relative. His scholarship has been a gift that God has used along the way to keep many of us in the family. I highly recommend this book.