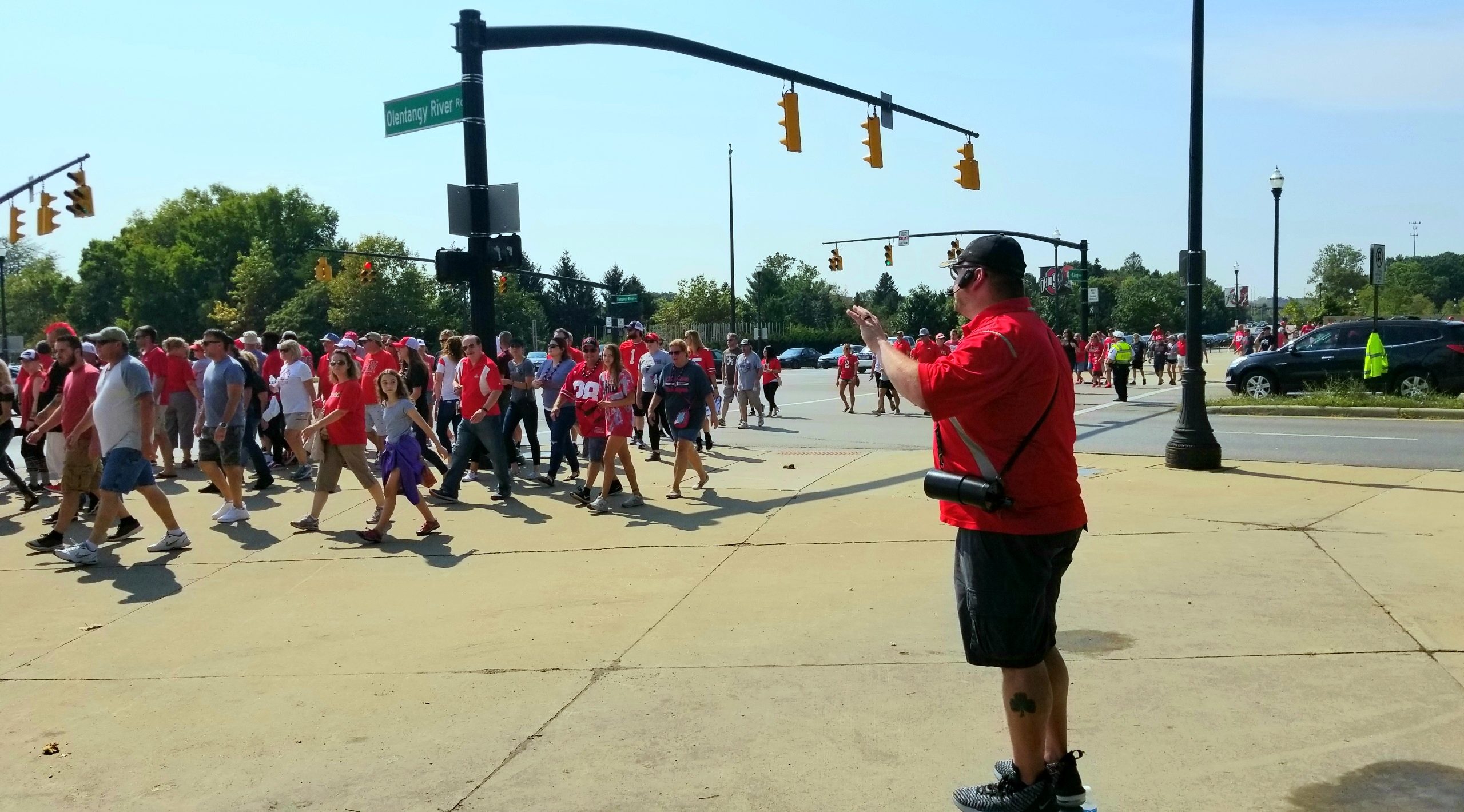 On September 21, 2019, I was joined by a faithful group of evangelists and an old friend. Andrew Jones, Jason Roberts, Miri Roberts, and Wesley Coughlin are regulars at Ohio State football games. Cory Wasmus, an old friend was able to come as well! It was a great day of evangelism as the Lord answered a few specific prayers, strengthening our faith and comforting us. Let me tell you about it!

One of the commitments we make to evangelism is that regardless of the weather, we are going to show up to give the gospel to the people. Sports fans will visit their team’s stadium regardless of the conditions. How much more should we be willing to represent our Lord Jesus Christ in any circumstance?

So when the forecast called for rain, there was no hesitation on my part—but a change in preparation. When rain is predicted I do a few things:

Preparation is key. You don’t want to have your equipment ruined or tracts become unusable because you were not prepared. Wesley and Miri tracting the fans.

We moved our meeting time back 15 minutes to avoid the rain. That part of the plan worked perfectly. But what was really a bit unexpected was how HOT it was that day. The rain seemed to exacerbate that instead of cooling things off. Team members were uncomfortable very early (like before we started) because of the heat and humidity. And, for the first time this year, I forgot to bring bottled water. Because of my desire to pack very light on rainy days, I forgot water!

So we sang two hymns together and then prayed that God would take care of us. I specifically prayed that God would send comfort to us from the heat and that he would send a vendor with water bottles. After we split up to minister, we noticed that every once in a while God sent a cool breeze that was quite a relief from the heat. And I asked one of the ticket vendors that if he saw the guy who usually sells water. He pointed a hundred feet away and told me the water bottle guy was on the bridge. I hurried over and bought 5 bottles of water and everyone was greatly comforted! Cory on the left.

I was thankful to have Cory with us this week to take some of the load of preaching. He was able to preach for 20 or 30 minutes to start us off. When he stopped I was happy to see that I only needed to fill in about 90-100 minutes (as opposed to the over two hours I needed to go last game)!

One notable moment was when I referred to homosexuality and divorce as abominations to God which we as a culture now approve of. Two “christian” men and a lady who was with them took such exception with that statement that they said that I was not a Christian. I always find the judgments of the “you-can’t-judge-others-crowd” a bit comical. But the ire in these men’s hearts was palpable. They were not willing to stay and engage with the preaching (even though one guy asked one “gotcha” question*), nor were they willing to stay and talk to Andrew who offered to speak with them. So I quoted Romans 12:2 and pointed out that they were conforming to the world rather than the pure Word of God. May God have mercy on their souls and bring them from death to life! There is my normal spot where I preach with an amp.

I preached for about an hour or so when my microphone suddenly died! This was due to a lack of preparation, something I try to be careful about. When this happened, I took a break and talked with my team. The location where I preach is only useful with amplification because of distance from the hearers. But God had another plan. We moved to a new location which is also very good for tracts, and I found some natural elevation where I could preach from. God really blessed me.

You can see me on the right preaching as fans walked over the bridge toward Ohio Stadium. The elevation causes people to look up to the Word of God being preached.

While I was standing on my little preaching stool, my right ankle had started to really hurt. I felt like it would have been ok if I could just move around. The new spot allowed me to move around and I didn’t have any more ankle pain. Additionally, I was exhausted from preaching BEFORE my battery died. But when we moved to the new location I forgot all about that and was able to preach almost another hour. Many souls heard the gospel, praise Jesus!

Thanks be to God for the gift of comfort that day. We had a nice time of fellowship and many people got tracts. Thanks to all of you who prayed for us or helped in any way.

* A question designed to stump the person to whom it is asked.