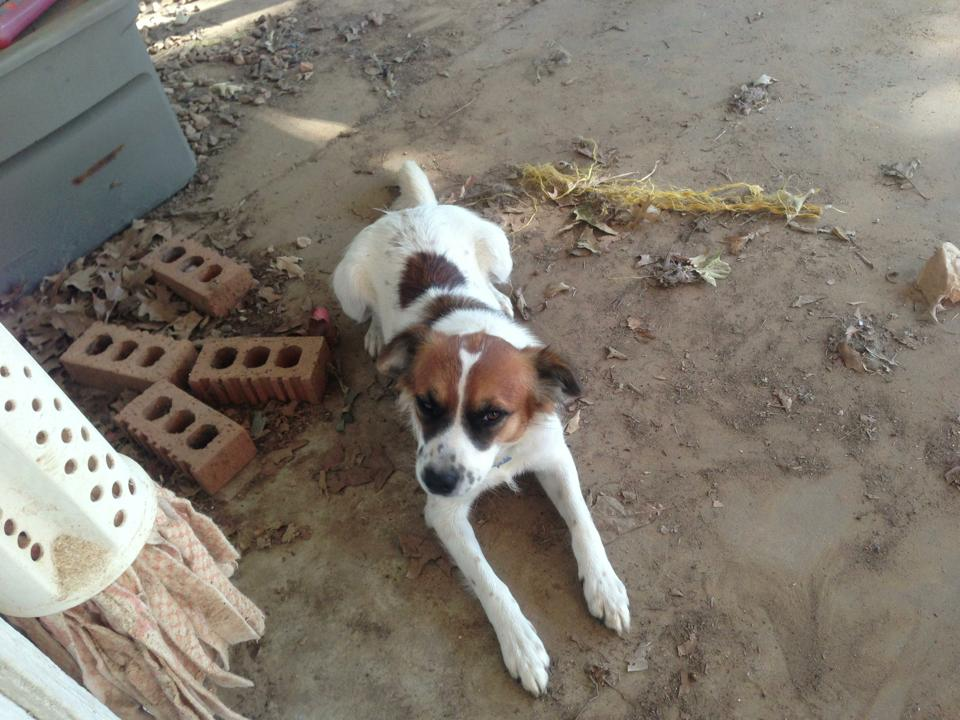 I had just finished listening to a wonderful message from Paul David Tripp at G3 2018 on Parenting. I hung around, chatting with a few folks after the message, and then made my way to the bookstore to grab Tripp’s book on the subject. Sadly, they were already sold out (figured they would be), so I sent my wife a quick text message (who really wanted me to get a copy). What I got was this text in reply:

We first laid eyes on Molly in a church parking lot in 2012. She was an abandoned puppy that someone had dropped off, hoping a more sympathetic human would pick her up. My wife and sons were adamant that we be said sympathetic humans. I obstinately put my foot down. We did not need a dog at that juncture in our lives. “No way are we keeping that thing!” Well, guess who came home with us that night?

Molly is 100% mutt. At one time a vet said she might be part Saint Bernard. Say what!? We prepared for her to get bigger and bigger, but she never passed 25 pounds.

My wife and I have had a couple dogs in our marriage. Neither of them panned out to be good dogs. That’s actually an understatement. They were terrible dogs. I had to chase one barefoot through a bean field one day, but that’s a different blog post altogether. Needless to say, we got rid of them.

Along came Molly the mutt.

I put zero effort into training her as a puppy because I was less than excited about dealing with another dog. But wouldn’t you know? She’s been the best dog we’ve ever had. She actually comes to you when you call her! She is awesome with the kids, fun to play with, and as loyal and protective as they come.

So, on Friday, January 19th, when she went missing, my family was devastated. I thought ‘surely she will come back.’ She never runs away, and any amount of time that we couldn’t find her has always been short – maybe an hour or two at the longest. She has this face that looks like she’s smiling at you, so I was sure she’d come smiling back up to the house, wagging her tail any moment. Then my wife would text me and say she was okay.

The text never came. My kids were crying and I was nine hours away in Atlanta feeling helpless. I told my wife to pray with them and ask the Lord for Molly’s safe return. To be honest, on the inside, I was beginning to be concerned she’d never make it back.

I got back to Arkansas from Atlanta at about 8:00pm Saturday night (1/20) and I went out in the woods with the boys and a flashlight calling for Molly. Nothing. Everyone was sad and crying, except for my oldest daughter (who is 6), she was more like wailing – full blown lamenting going down, with deep painful sobs. Talk about pulling a daddy’s heartstrings. So, we prayed again that Molly would come back to us, but hope waivered.

Over the next few days, we would call out for Molly when we drove around. We put up pictures on Facebook. We got a few hits, but everything turned out to be false alarms. Finally, we decided that Molly was never coming home. To comfort ourselves, we said maybe she got picked up by somebody and was enjoying life in a new home.

Fast forward to Monday, January 30th. Molly had been gone for 10+ days. We had embraced the truth that we’d never see her again. I pulled up in the drive after lunch ready to head to a meeting in Little Rock, and who came limping up to greet me? That’s right. Molly. She went full blown Shadow limping back up to meet Peter on Homeward Bound.

On Friday of #g32018 our dog went missing. When I got home we searched some more but gave up hope. Very sad. We had her for 5+ years.

Today she showed up. Limping. Skinny. Disheveled. But home. Wow.

My wife drove up with our kids and I began jumping and pointing at Molly. They were so excited that they all scurried out of the car and fell on the ground with our beloved dog. Tears were everywhere, as well as some slobber. Our family was once again reunited. We still aren’t quite sure what happened, but Molly continues limping on one of her legs. She was super skinny and looked pretty rough at first, but after two nights at home and some food and water, she’s perked back up and is returning to the old dog we all (yes, even me) love.

God isn’t sitting off in some distant galaxy, but is meticulously involved in every aspect of His universe. There is not a single atom in all of creation that is not under His sovereign direction (see Job 42:2, Psalm 115:3,… Click To Tweet

Well, do I have a point in all of this? Yes, I do! And that is this: Sadly, we don’t give God credit in such ‘insignificant’ matters sometimes. Yes, I know the opposite is true too, that we sometimes get so ‘me-centered’ that we think God is gushing over us like a High School crush. But, too often, we think God doesn’t care about the ordinary, the mundane, the lost dog. For the Nelson family, however, we are reminded that God is pleased at times to answer the smallest of prayers to remind us of His goodness. He is the God of galaxies and the God of lost dogs. He is sovereign over all. He isn’t sitting off in some distant galaxy, but is meticulously involved in every aspect of His universe. There is not a single atom in all of creation that is not under His sovereign direction (see Job 42:2, Psalm 115:3, Proverbs 16:4).

Therefore, you can pray to God in the big things and the small knowing that He cares for you (1 Peter 5:7). Would God still be good if He wouldn’t have brought Molly home? Absolutely. But in this instance, He chose to answer this small prayer affirmatively to remind us that He is a great God.

Give Him praise for the “small things” too.

You can pray to God in the big things and the small knowing that He cares for you (1 Peter 5:7). Click To Tweet