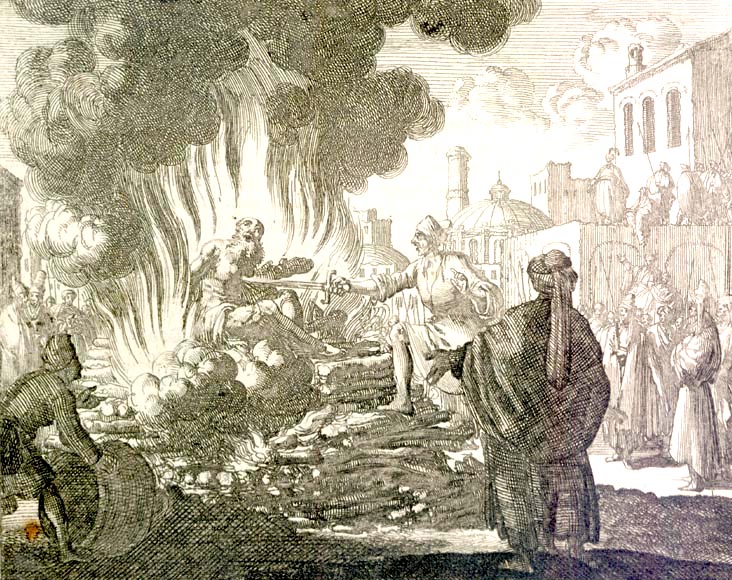 Polycarp, Tyndale, Wycliffe, Miano and Filling Up What Is Lacking In Christ’s Afflictions

Because of his refusal to burn incense to the Roman Emperor, Polycarp was sentenced to burn at the stake. Tradition says that the flames didn’t actually kill him, so he was stabbed to death.

William Tyndale, who translated the Bible into English, was choked to death while tied to the stake. Then his dead body was burned.

John Wycliffe was persecuted fiercely for standing against Papal authority, and his body was dug up and burned along with many of his writings.

In 2018, Tony Miano, a street evangelist in Iowa, stood trial for sharing the Gospel after an arrest in 2017. He was accused of “Disorderly Conduct: Loud and Raucous Noise,” and causing distress to people inside a public building.

The message Paul taught was fully known to the church in Colossae, however the seeds of heresy had begun to seep into it. Epaphras, their pastor, was concerned for them and immediately ran over to Rome to visit Paul in jail. Epaphras asked for a letter from the Apostle himself to combat an early form of the Gnostic heresy.

In short, Gnostics believed there was a secret knowledge that could be obtained only by “spiritual elites” who could tap into God’s mysteries. They accomplished this through Judaized asceticism, avoiding certain foods, observing special days, or utter licensiousness and acquiescence to the evil that permeated the culture. But worst of all, they believed that Christ was simply an emanation or a de-evolutionized version of God. The worship of angels was prevalent, believing they were the creators of the world. This could have huge ramifications on the life and future of the Colossian church.

Filling Up What is Lacking

The text before us is Colossians 1:24:

“Now I rejoice in my sufferings for your sake, and in my flesh I am filling up what is lacking in Christ’s afflictions for the sake of his body, that is, the church…”

Thankfully, Paul isn’t saying here that Christ’s work on the cross wasn’t enough or it was insufficient to achieve our salvation from the penalty, power, and eventually the presence of sin. That would contradict Hebrews 10:10: “And by that will we have been sanctified through the offering of the body of Jesus Christ once for all.”

This word affliction (thlipsis) is never used in NT in relation to Christ’s crucifixion on the cross. It means “distress,” “pressure,” or “trouble.”

Through Thick and Thin

What Paul is saying here is very encouraging. Jesus’ ministry in the flesh was short, three years to be exact, and he suffered to the uttermost. But, in a sense, his suffering isn’t finished. It’s still ongoing. Believers are so intimately united with Him that, when we suffer for the sake of the Gospel in the Church Age, Christ suffers along with us. Remember, Jesus asked Saul on the Damascus Road, “Why do you persecute Me?” (Acts 9:4). Christ didn’t ask, “Why do you persecute My church?” Instead, this reference to “Me” gave Saul his first glimpse into the great doctrine of Christians being “in Him.”

Since the church is Christ’s body, He’s affected when His bride is affected.

This flew in the face of all the gnostics who denied that Jesus was God, (to them he was just a lesser, devolved version). If Jesus wasn’t fully God, there was no way he could be a spotless, acceptable sacrifice, while also bearing the wrath for our infinitely evil sins against an infinitely Holy God on the cross.

This flew in the face of all those gnostic heretics infiltrating the church in Colossae who claimed that all matter, flesh included, was evil. If that were true, Jesus, who in His body all the fullness of God dwelt, couldn’t identify with us nor live in us so closely as to be persecuted with redeemed humans.

Those who malign believers will give specific account for the evil they’ve perpetrated, not because (we) Christians are intrinsically special, but by virtue of our being “In Him.”

This union is what makes suffering for the sake of Christ so special. Paul rejoiced in it because persecution was refining his faith, he was learning to live by drawing from Christ for all of his needs, and he was confident that he was walking in God’s revealed will. So any suffering brought Him, as Romans 8:18 says, an eternal weight of glory. Suffering may last for a few years; His reward for suffering will last for eternity.

Like Miano, Polycarp, Tyndale, and Wycliffe, Paul wasn’t persecuted for narcigeting. He wasn’t beaten for telling really inspiring stories about himself and how he overcame great challenges. Paul wasn’t hated for his stance on guns or his call for social justice. He wasn’t stoned because of his a 10-step plan for a great marriage or financial peace.

He told people that they were so helpless to save themselves that the perfect Son of God had to experience His Father’s rejection and wrath on the cross so that they could receive the Father’s acceptance and righteousness. Paul was hated because he was single-minded about preaching the cross and resurrection for the forgiveness of sins.

Christ’s laborers must speak the truth with clarity. Our authority in teaching comes only from faithfully teaching God’s Word. We lose the authority given to us by God the moment we teach anything else. Christ’s laborers must be prepared to suffer, because when we teach Christ, the only way, truth, life, and portion of the church, we instantly become hated enemies of the world. But take heart, we are in Him, and he has overcome the world (John 16:33).

Paul was hated because he was single-minded about preaching the cross and resurrection for the forgiveness of sins. Click To Tweet