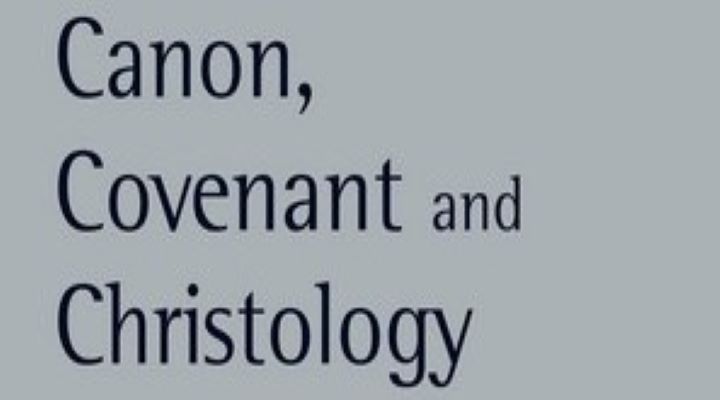 Book Review — Canon, Covenant, and Christology: Rethinking Jesus and the Scriptures of Israel

NOTE: Those opposed to images of Christ based on 2nd Commandment convictions should be aware that the cover of this book includes an image representing Jesus. The image has been covered over for purposes of this review.

Matthew Barrett is an associate professor of Christian Theology at Midwestern Baptist Theological Seminary. He is executive editor of Credo magazine and host of the podcast by the same name. He served as editor of Reformation Theology: A Systematic Summary and The Doctrine on Which the Church Stands or Falls: Justification in Biblical, Theological, Historical, and Pastoral Perspective; as well as co-editor of the Reformed, Exegetical and Doctrinal Studies series. He is the author of None Greater: The Undomesticated Attributes of God and God’s Word Alone.

Have you ever wondered why Jesus and the gospel writers do not seem to have a fully developed doctrine of scripture like Paul? Why don’t we have anything personally written by Jesus of Nazareth? If we claim to be followers of Jesus, what was his view of Scripture? For believing Christians under the new covenant, what is our relationship to the old covenant?

The idea of a “Christ Centered Hermeneutic” is a good start in many ways, but what exactly does that mean? It may sound good in theory to say that Jesus is the interpretive key to the Bible, but in practice that could easily mean something like, “Jesus was mostly a nice guy who was good with kids and said some nice things about being nice to each other, therefore that harsh God of the Old Testament was really just what people thought about God, not what God is really like.” Most professing Christians would reject that kind of extreme view of the Bible, but is it possible some of us have fallen for more subtle errors without realizing it?

With Canon, Covenant and Christology Dr. Matthew Barrett has come out with a resource to tackle these questions. The book is an interesting combination of several theological disciplines. Is this a book about interpretive method? Doctrine of Scripture? Covenant Theology? The person and work of Christ? Yes, it’s all of the above.

Barrett starts by laying the groundwork for what will follow in the rest of the book, beginning with the foundational issue of what the Bible is. What do we mean when we say the Bible is God’s Word? Barrett recounts the historical drift from the high view of Scripture as divinely inspired and inerrant, to a “hermeneutic of suspicion” brought on by so called higher criticism (10). Almost imperceptibly, the Bible came to be seen as a disorganized collection of writings by various human authors. As a result, some critical scholars have claimed that the idea of a coherent, unbroken biblical theology “is wish fulfillment and fantasy” and that for the most part, “there is no internal coherence (to the New Testament)” (13).

The Princeton heavyweight, Geerhardus Vos took a different view from Gabler, saying that a true biblical theology means unpacking the “historic continuity and multiformity” of divine revelation, interpreting Scripture on its own terms (19). In other words, Gabler placed the would-be theologian above the Bible, while Vos began with the recognition of the whole Bible as the authoritative Word of God. Gabler’s view made the Old Testament problematic, while Vos had no need to separate the it from the New Testament. As Barrett puts it, Vos was “always holding out Christ as the goal of the old covenant.”

Borrowing from Stuhlmacher, Barrett then moves into a discussion of what he calls “the Christological clamp” which makes legitimate biblical theology possible. The divinely intended “justification and purpose” of the canon of Scripture can only be found with the recognition that the gospel revealed in salvation history has Christ as the center (21). There has to be a “divine architect and monarch” guiding history in the first place for us to say that the canon holds together (23). As Barrett later puts it, “Showing Jesus to be the ‘Christological clamp’ is paramount to confirming canonical unity and the canon’s divine origin.” (39).

If we claim to be followers of Jesus, it might be a good idea to consider what his view of the Scriptures was and what context he read and taught them in. Barrett points out that Jesus’s Bible was the Scriptures of Israel (41). Israel’s very existence could only be explained by God’s covenantal word (42). The fullness of God’s covenantal word was progressively revealed to be motivated by the person and work of Christ (45).

Barrett’s points build on one another so that the skeleton of his vision for biblical theology starts to take shape. With God’s covenantal word in view, even wisdom literature like Proverbs can be seen as connected to redemptive history through covenant. Solomon’s statement that the fear of the LORD is the beginning of knowledge” (cf. Proverbs 1:7), can be seen as the affirmation that God’s people are accountable to him under covenant treaty. Put another way, “the way of wisdom is the way of covenant.” (69).

With the focus on Christ as the center and the canon of Scripture framed as God’s covenant word, Barrett gives us “case studies” in Matthew’s and John’s gospels. For example, the theme of fulfillment in Matthew comes into view as God’s plan all along and not just Matthew’s ret-con of someone else’s writings. In Chapter 17, fulfillment becomes embodied at the transfiguration of Christ with special appearances by Moses and Elijah (131-132). The inner circle of Peter, James, and John were privy to Moses and Elijah serving “as identity markers of God’s covenant with his people”, fulfilled by Christ (133).

Barrett then unpacks how Matthew, Mark, and Luke reveal the significance of Christ’s obedience. He argues that Jesus’s covenant obedience to the Scriptures is the way that he fulfills the Scriptures (246). Over and over again, Christ the second Adam succeeded in covenant obedience where the first Adam failed. Moving further ahead in “From Christology to canon”, Barrett concludes that “The Word of God became incarnate for the purpose of lisping the word of the covenant to the people of the covenant.” (295).

There is much to appreciate about this book. Barrett touches on the somewhat strained relationship between systematic theologians and biblical theologians, and rightly says that these two disciplines can and should work in harmony. In many ways, this book is a culmination of several areas that the author has covered in the past. Barrett brings together the inspiration and authority of Scripture, systematic theology, theology proper, Christology, and soteriology all into one volume.

Canon, Covenant, and Christology is a unique book that equally functions as a study of biblical interpretation, the nature of the canon of Scripture, and the person and work of Christ. Anyone digging into a study of the gospels would be wise to consult this book for what it shows us about Jesus’s view of Scripture, his fulfillment as the perfectly obedient second Adam, and God’s covenant faithfulness. I look forward to making use of this great resource in the future. Highly recommended.