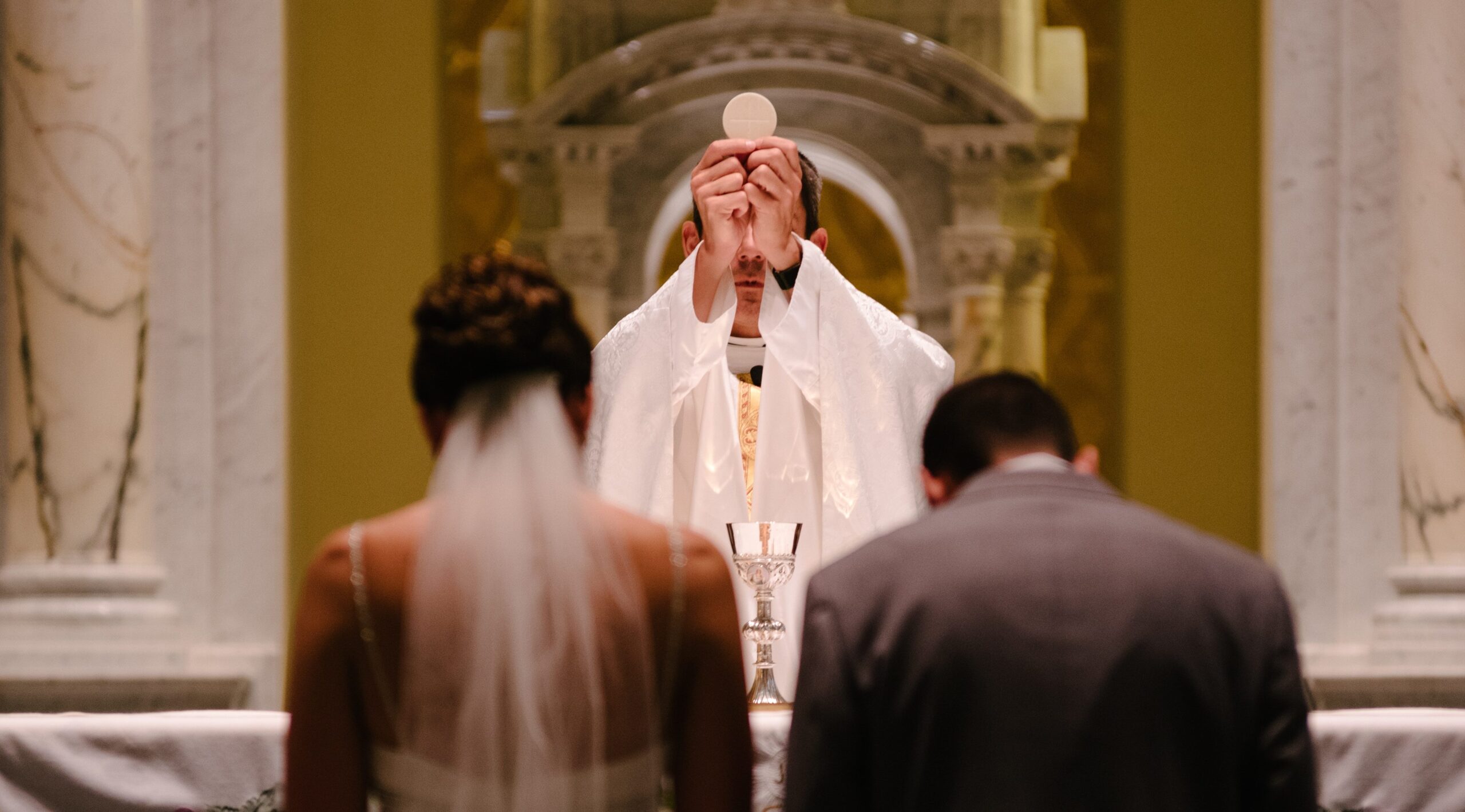 Should You Attend a Catholic Wedding or Funeral?

It’s a question which many Christians face: Should I attend my friend or family member’s Catholic wedding or funeral? Is that the same as being unequally yoked with non-believers? What if someone there gets the wrong idea about what I believe? Does my presence there validate the religion? Here’s my opinion, and I promise, it’s worth the price of admission. As born-again believers and faithful protestants, we agree that the Roman Catholic religion is a soul-damning religion with which we are to have no partnership. The same is true of every false religion. The Christian who asks this question is genuinely concerned with participating in the unfruitful works of darkness…but something in them tells them “weddings and funerals” are distinct from other religious services at a Catholic church, thus the question du jour.

I’ll show my cards early this hand and tell you that I believe it is possible for a faithful Christian to attend a wedding or a funeral which is associated with another religion. I realize that there will be people who disagree. I am open to hearing comments from people on either side of the issue. What I can say for sure though, is that if attending a Catholic wedding or funeral would violate YOUR conscience, you ought not! The question is whether that conviction you hold is one that others must follow as well. I’ll attempt to make the case that we cannot judge a brother for differing with us on this issue. The thrust of my argument is this. I tend to think of weddings and funerals as human life events, rather than religious events. The fact that those involved in planning any particular wedding or funeral associate the event with their religion is immaterial to me. The fact of the matter is that God ordained marriage and God oversees the death of literally everyone. Assuming the marriage is biblically lawful, I attend a wedding to be a witness of the couple making their vows and to wish them the best. Also, there’s usually cake.

Funerals are similar. Regardless of the religion of the deceased, or their family’s religious views, I desire to show my love for that person and the family through my presence. Many people use the term ‘paying respects’ and I think that’s appropriate. Someone just lost a loved one—I think I am somewhat obligated to interrupt my life for a couple of hours just to give my sympathy.

If those people choose to do religious stuff, I am not a participant; I am a witness. If I attend a Catholic wedding and they have mass and the eucharist—I am an observer. A Hindu funeral? I’m just there to be loving, and I am only an observer when they do their religious rituals.

You may say, “but your presence shows your approval of their false belief.” Does it really? Do you honestly believe that it’s the perception of anyone in the room that everyone in the room is in agreement on religious beliefs? When I choose not to participate in prayers or chants or standing or kneeling, do you really think people say “Wow, Michael approves of Catholicism.” When I sit in my seat while the rest walk up for the Eucharist, does that really strike you as approval? The essence of the objection “your presence could be construed as approval” is loaded with one major problem, as I see it. For my mere presence at your Roman Catholic funeral to be construed as my approval of the religious system, that seems to imply that I haven’t already made my views on that system clear. Neither to the public nor to the person affected.

You see, the problem isn’t that attending a wedding or a funeral de facto exhibits approval. The problem is not speaking the gospel to people prior to this event where you fear confusion. If you live a life dedicated to Christ, and your family and friends are aware of the gospel you believe and the God you serve, your presence at a standard life event will not cause them to be confused about where you stand. It could provide an opportunity to present the gospel as well. Let’s say someone is inquisitive about why you are there. That’s a chance for you to explain what I just explained above: why you would attend a wedding or funeral, but not a baptism or a confirmation, for example.

If you are not comfortable attending a wedding or a funeral, do not attend! If you have not lived in such a way where people in your life know where you stand religiously, take appropriate action to love those around you who are headed to Hell and warn them of the wrath of God and tell them of the grace of God in Christ. If you choose to attend a wedding or a funeral that is Roman Catholic (or any false religion), do be cautious that you avoid participation while attending. Although I believe a brother or sister could legally attend one of these events, you still need to be careful you do not cross a line from outside observer to a fellow worshipper of their idols.

And frankly, don’t be shy about your beliefs. Give the bride and groom a generous gift and a tract. I actually wrote a “wedding tract” years ago and I can adjust it for any new couple whose wedding I’m privileged to be invited to. Find ways to tell people of Jesus Christ at funerals. Contrary to what worldly thinking would tell you, a funeral is a perfect time to tell people about what Jesus did for sinners. I wrote about it here. Use your freedom in Christ to serve others, rather than as an opportunity for the flesh.

Finally, be kind and patient with each other if you find yourself in disagreement with a dear brother over this issue (including me)! Let iron sharpen iron as we help each other grow in the likeness of Christ by the transforming power of His Word and His Spirit.