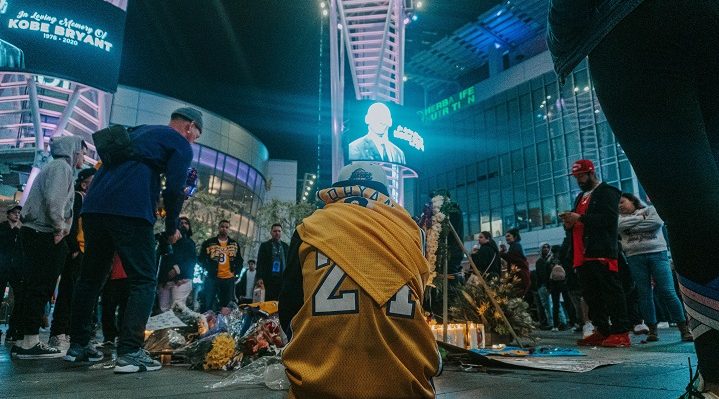 By All Means, Mourn Kobe Bryant’s Death, But…

Let me try to make some sense of this for you. The “grieving” process is going to differ from person to person, and how one is affected by any public event can appear inconsistent even within an individual. I may be abundantly affected and cry about the death of one celebrity and appear indifferent toward another’s. This is largely due to my mutability. On any given day, I have more time or energy to devote to those types of things or I am more susceptible to emotional outpourings. Generally speaking, those things aren’t objectively bad.

That is, it isn’t morally wrong to be emotionally brought down by Kobe’s death, nor is it a moral responsibility that one must be. Our own blogger, Kofi, tweeted that ever since the death of his brother, accidents hit him hard emotionally. His tweet is an example of Christian maturity. Experiencing emotions is part and parcel of the human existence. Dealing with them in a productive way by taking them captive to obey Christ is the goal of the Christian experience (2 Corinthians 10:5).

Now, having established the necessity of our emotions, let’s look at how to consider them in light of Kobe Bryant’s or any public figure’s death. Photo by Fred Kearney on Unsplash

Let’s begin by refuting the callous and unreasonable claim that we must be terribly indifferent to a celebrity’s death. Yes, many people will be indifferent. There are a great number of people who are unconcerned by public events which don’t touch them personally. But it isn’t right to expect that from everyone. People who watched Kobe play, even those who didn’t like him because he beat their favorite team, find a connection with him because of the shared experience of enjoying the game. This can apply to actors, politicians, or any number of people whose lives affect ours from a distance.

Not only that but what can be said about the man who sheds tears over the demise of his neighbor but that he’s a caring and compassionate man like Christ? Death has lost its sting, but we still feel it poking. Kobe’s death is a reminder of the fallenness of man, the cursed creation, and our own mortality. Worse yet, there are no good reasons to believe Kobe was saved by grace through faith, so we mourn the death of a man destined for eternity who will suffer the punishment God’s justice demands. Being completely indifferent about Kobe’s death is acceptable, but the Christian who is never moved by anyone’s death to sense more urgency in evangelism ought to fear for his own soul.

Second: Degrees of Grief  May Vary The degree to which Kobe’s death will affect any individual will vary for a lot of reasons. Someone who lost a friend in a similar accident could be more affected because this circumstance triggers memories of their own trauma from the past. Some people are better equipped to handle their emotions than others, so how long they persist in their grief could be different. And personal connections will matter too. I have to imagine that Lakers fans are generally more affected than Celtics fans…

I know in my own experience that my wife and I know someone whose granddaughter was murdered at Sandy Hook in 2012. The anniversary of this event affects us far more severely than any other school shooting to date. This is largely due to the personal connection we felt that day while we prayed for our friend’s granddaughter as our friend waited to hear that she was safely out of the school. When that news never came, we grieved more than others who were a few more degrees separated from the events.

Third: Degrees of Grief  May Vary But Let’s Not Pretend They Are Completely Unimportant

Your degree of grief may be an indicator of an underlying need.

It is OK to be affected by someone you don’t know dying. And while our degrees of grief may vary, I think we should be able to say there’s a reasonability factor involved. And this is where some of the comparisons come in. People say things like “you aren’t mourning the other people on the helicopter, only your idol, Kobe,” or “I don’t see you mourning the death of thousands of babies killed by abortion this week!” The root of these comparisons is the idea that somehow if you are so capable of expressing grief for Kobe Bryant, you ought to also be able to do so for others. And I think there’s a point there. It may seem ill-timed when these criticisms come, but ask yourself why is it exactly that Kobe’s death affects you so much more than others’ deaths if it does? Does it reveal something in your heart, possibly an idol in the form of celebrity worship, that should no be so? Does it reveal that somehow you thought because he was great at a popular sport that somehow he’d escape death?

This should not be a total surprise, either.

Additionally, if a celebrity’s death is cause for you to miss work, that seems to be crossing the line from reasonable emotions to you need to grow in your maturity. Death is a natural part of our lives in this sin-cursed world, and if someone famous dying is enough to debilitate you then there is reason to fear for your future. Every day there will be a bad thing happening somewhere until Jesus comes. Children will be raped and kidnapped and killed every day. Women are assaulted and abused every day. Politicians lie every minute. Bloggers invent statistics…the list goes on and on. The point is that we need to develop a sense of the show must go on even when bad things happen. If your grief over Kobe causes you to miss work, critics may be concerned more about “what else will cause him to miss work?” rather than being critical for criticism’s sake. And if you use “bereavement leave” expecting your employer to pay for it? Well, that’s between you and your employer, but I can’t think of a single situation where I would still pay someone for something they didn’t do if their reasoning was “But Kobe died.” Imagine your painter sending you a bill for 8 hours of painting your hallways and foyer but never showing up because he was grieving Kobe Bryant’s death—the idea itself sounds foolish and if allowed to grow will not bode well for anyone.

Love Is The More Excellent Way Photo by Aaron Burden on Unsplash

Earlier I quoted 1 Corinthians 12:31 which is the lead-in to the most famous Bible chapter about love. The key here is to have a soft heart that loves your brother or sister in Christ and your neighbor. Your love for all of those folks should manifest itself in a desire to understand and sympathize with people who are hurting, married to a commitment to helping them grieve and deal with their emotions in the best way possible which means both holding them while walking them through it patiently and helping them evaluate their feelings and actions in light of God’s perfect revelation. Handling that with grace requires the Spirit’s help in your own life. May God grant you the help you need to be a loving friend and neighbor through all the trials of life that we will encounter.

* It also may not reveal a problem. It may just be that this event affected you more than others for some reason.