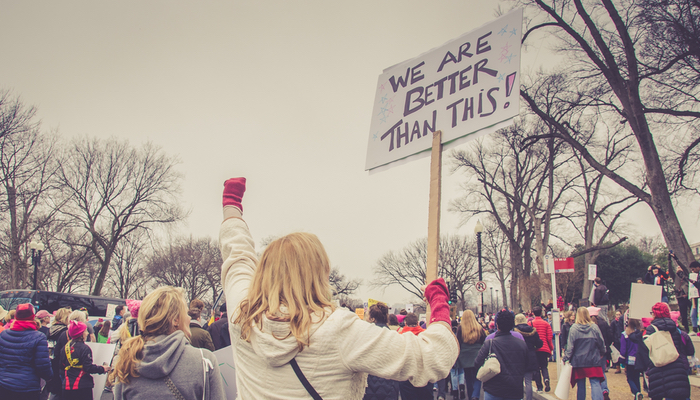 Pray for Their [Eternal] Lives – Comments on March for Our Lives I met Brian Clash of the Brian Clash Band before the event. I didn’t realize he would be one of the stage performers.

Knowing that a crowd of people would gather in my great city, I planned to attend this event and evangelize when I first heard of it. I consider public school students in the United States to be an unreached people group. Part of evangelism includes asking people questions and finding out what they believe. It has been my personal experience that fewer and fewer people know anything about Jesus or the Bible or sin than when I was growing up.

It seems we are in a culture that is becoming more and more non-religious, that is, in the sense that fewer people are holding to what we’d consider conventional beliefs about religion.

The need is great for Christians to reach out and get the gospel to a lost and dying culture! There between a t-shirt selling tent and the voter registration tent you can see my brothers standing at the prayer stand.

I arrived at the event very early in order to ensure I knew what was going on and had time to set up. My good brothers and partners in evangelism, Joe Conkle and Josh Smith, also came down from Ashland, OH to help me.

Attendees were encouraged to arrive at 10 am. At 11, the event began and consisted of an emcee who essentially introduced speakers and musical performers.

Then at 1 pm, there was a march from the location to the Ohio Statehouse.

Tens of thousands of dollars must have been put into the event. The audio/visual system was state of the art. Security personnel were in place; food trucks surrounded the south end of the event. Overall the organization was impressive. This was more than just something that got thrown together. Joe going through the good person test with this young man who asked for prayer and professed to know Christ. Patrick did not appear to know the gospel. Pray for him, will you?

I am an open-air preacher. The longer I serve the Lord Jesus Christ, the more it is clear to me that open-air preaching is a way I can serve Him and enjoy serving him. Naturally, showing up at an event like this and preaching God’s Word would have been a very effective way to disseminate the gospel to a lot of people in a short time.

But Joe and I each had prayed about this event and had concluded preaching was not something we wanted to do. Due to the sensitive nature of the event (mourning death and shootings) and the heightened emotionalism often displayed by the folks that were naturally inclined toward this type of political activism, we thought it best to be less confrontational (preaching) and more conversational.

The fact that we independently landed on this approach after personal prayer, without having discussed this first was enough for me to eschew preaching that day. But I must say, I was and am still torn about the decision. Our prayer stand, and thus, our sovereign Lord Jesus Christ, attracted only a few dozen people with whom we had conversations and gave out tracts. Granted, they were all very wonderful conversations, and folks heard the gospel, but I couldn’t help but regret that I was not preaching to the tens of thousands in attendance that day. Ultimately, we must trust our God who ordains every detail of our lives. I submitted to the wisdom of my friend and even my own inclination. Because I did this I had to fight the desires to preach that day, a desire I did not succumb to. Batman is fictional, but this kid’s eternity is for real.

My second dilemma was that I am not without an opinion on the political topics folks were doing activism in regards to that day. Many of the people there carried signs which either contained untruths or simply poor logic.

Additionally, the generally ‘left-leaning’ crowd wasn’t just there to fight for gun control. Many of the people there were clearly anti-Trump or any Republican, and, as is common in my dear city, several people were very openly pro-gay at the event.

We decided as a group that our desire that day was to pray for people and dispense the gospel of Jesus Christ, not to engage in debates about guns or even argue with the logic of ‘the left.’

Part of getting the gospel to a generation of people involves a certain level of strategy. At the risk of being labeled nonspiritual, allow me to share a few strategies.

First, you must come prepared. It was a freezing cold day with overcast skies. Wearing thick socks and a wool cap was essential so that I could remain outside for several hours to minister!

Secondly, I arrived very early to the event, brought cash in case I needed it, and spent almost a half-hour just walking the grounds and getting a lay of the land.

Another thing I did early on was to make friends with the security team. I spotted them (in plainclothes) and just struck up a conversation. It turned out one of the guys lives in my neighborhood, which gave us some rapport. Even more encouraging was that the two security guards I made the acquaintance of were both Christians. I told them what I was doing there and it seemed to make them glad. I was very hopeful that if there were any kind of complaints made, that maybe that relationship would be helpful to me.

In the end, the day went by without incident, even though we could tell some people did not agree with us being there. But if Columbus is anything, it is the city of tolerance, and my beliefs and desire to be there was tolerated.

God sent a young lady to speak to us who was from the city next door to where I grew up, who now goes to school at Ashland U, where Joe often speaks to the football team! We had a wonderful conversation with her, aided by the providentially ‘small world’ we agreed we live in.

Another young lady, Natalie, told me she thought it was odd that we were there because, “Christians are usually anti, like, everything we stand for here today.”

What an opportunity God provided me. I explained to Natalie that Christians are pro-God, thus, pro-people, and thus, anti-murder-of-people. I was able to communicate to her that even though yes we probably could disagree on much, that as Christians we value human life and oppose things like shooting deaths. She was very grateful that we were there to pray for people! This lady walked up to us and said, “We’re pastors at our church.” I made sure they got tracts and was thankful that she engaged Joe and Josh because … I just can’t pass up that argument, and I was glad I didn’t have it that day…

When he went ashore he saw a great crowd, and he had compassion on them, because they were like sheep without a shepherd. And he began to teach them many things. —Mark 6:34

Several things struck me that day, though. First, a lot of people gathered together to protest. You can argue all you want about their logical inconsistencies concerning the value of human life, and you can disagree about the method they believe will ‘end violence.’ But what I saw was a lot of people who are really scared, and really hopeless.

I saw a lot of people who are being led around by folks who are just using them for political reasons. And I saw people who had really been hurt by and affected by violence near to them. The event wasn’t just about school shootings and never was. It was about the generally perceived problem with gun violence in our country. And regardless of how you feel about the Second Amendment and the NRA, I could sense that a great many of these people were just scared and wanted to do something about the problem. My heart filled with compassion for them as I stood there enjoying the grace of God in my own life, knowing that prior to God causing me to be born from above and granted wisdom from His Word, that I was as blind and easily led into pits of destruction as I could so clearly see them headed toward.

When you see the hashtag #MarchforourLives, I want you to think about praying for their eternal lives. Click To Tweet

I was moved with disdain for my own heart that is so quick to judge ‘liberals’ when they (frankly) spew nonsense. My challenge to you, dear Christian, is to look at your own interaction in this increasingly segregated and hostile political environment and ask yourself the following questions and consider before the Lord Jesus Christ if you are walking in the Spirit.

You do not answer to me, oh brother or sister. You must stand or fall before your maker. I simply want to encourage you to think about your own heart and your own actions and allow God the Holy Spirit to renew in you a love for even those whom you may call your enemies.

But I say to you, Love your enemies and pray for those who persecute you —Matthew 5:44

In conclusion, when you see the hashtag #MarchforourLives, I want you to think about praying for their eternal lives. You get some idea of the size of the crowd from this photo. The next generation of voters, but also of folks to evangelize, are being prepared.