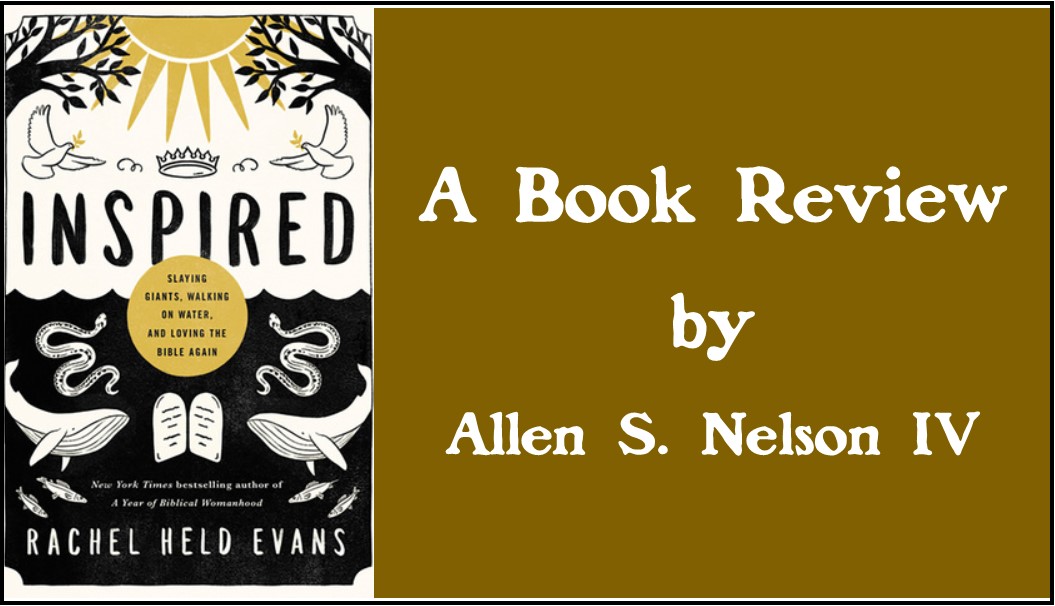 In the first post on Rachel Held Evans’ (RHE from now on) new book Inspired: Slaying Giants, Walking on Water, and Loving the Bible Again, I exhorted readers to teach the Bible well. In this post, I want to talk about one of RHE’s main issues with the Bible, which is that she does not believe the Scriptures to be clear.

It’s important to establish her view on the clarity of Scripture from the get-go to help as we continue through the rest of this blog series. Admittedly, ths post is a bit longer than most, but it’s crucial to grasp. Understanding that RHE doesn’t see the Bible as speaking clearly may help one to see how she can arrive at such absurd or wicked thoughts about Sacred Writ.

Is the Bible Clear?

One of the mainstays of RHE’s book and larger ministry is that the Bible is not clear. She writes:

“I’d always thought the more time I spent with the Bible, the more clarity I would receive, but as my nightstand grew cluttered with precarious stacks of books presenting Four Views on Atonement, Three Views on Hell, Five Views on Evolution, and Four Views on Homosexuality, it became apparent that, even among people who believed the Bible to speak with authority, the Bible’s message is not always plain. The presence of hundreds, if not thousands, of Christian denominations makes this point obvious.

I had encountered what Catholic sociologist Christian Smith termed ‘pervasive interpretive pluralism,’ which simply refers to the reality that even among people devoted to its truth, the Bible yields different interpretations and applications of its many teachings. This reality challenges the idea that the Bible is a straightforward blueprint for living or a compendium of inerrant teachings on which the faithful will always agree.” (pg. 101)

First, I’d like to challenge the notion that RHE actually believed she’d receive clarity from the Bible. How can I issue this challenge? She says her nightstand grew cluttered with the stack of books that gave opposing views to key doctrines (by the way, reading books about the Bible isn’t the same as reading the Bible. But I digress).

The first book she references on the Atonement was published in 2009. It’s hard for me to believe that she was sincerely longing to understand the Bible’s clarity as late as 2009. She is simply using these counterpoint books to bolster her position that the Bible is unclear. She wasn’t really seeking clarity by reading more of the Bible.

A Definition of Clarity

Secondly, we need to talk about the doctrine of the perspicuity of Scripture. Perspicuity means clarity which is sort of funny isn’t it? An unclear word to define a clear doctrine! I think Wayne Grudem offers a helpful definition here:

“The clarity of Scripture means that the Bible is written in such a way that its teachings are able to be understood by all who will read it seeking God’s help and being willing to follow it.”

This does not mean that all parts of Scripture are equally understandable. The 1689 Baptist Confession of Faith says:

“All things in Scripture are not alike plain in themselves, nor alike clear unto all, yet those things which are necessary to be known, believed and observed for salvation are so clearly propounded and opened in some places of Scripture or other, that not only the learned, but that unlearned, in a due use of ordinary means, may attain to a sufficient understanding of them.” (Chapter 1, Paragraph 7)

“The doctrine of the clarity of Scripture is not a wild assertion that the meaning of every verse in the Bible will be patently obvious to everyone. Rather, the perspicuity of Scripture upholds the notion that ordinary people using ordinary means can accurately understand enough of what must be known, believed, and observed for them to be faithful Christians.” (Taking God at His Word, pg. 59).

The doctrine of the perspicuity of Scripture teaches that the Bible, as a whole, is a clear book presenting clear teachings so that people may clearly know God and clearly follow Him.

Jesus says in Matthew 9:13 “Go and learn what this means: ‘I desire mercy, and not sacrifice.’ For I came not to call the righteous, but sinners.” Jesus quotes from Hosea 6:6 (which is Scripture) and expects that His listeners can learn what it means. In other words, Jesus believes Scripture to be perspicuous! (He often asks things like “Have you not read?” implying that His listeners should be able to read and understand Scripture).

The overwhelming testimony of Scripture is that it is presenting clear and understandable truth as to who God is, who we are, what God has done for us, and what is required of man.

Pluralism is not the Bible’s Problem

RHE’s argument is that since so many people think so many different things about the Bible then it’s “obvious” that the Bible is unclear.

Actually, I would say the existence of pluralism upholds the truthfulness of Scripture’s teaching on the sinfulness of man. From the beginning Satan has been the chief architect of twisting God’s word (Genesis 3). Should we not expect rebellious men to follow in his steps?. If the Bible’s teaching is true that “no one understands” (Romans 3:11), shouldn’t we expect a variety of strange interpretations when it comes to the Bible?

Furthermore, sin is so pervasive that even faithful followers of Christ can get things wrong. The late R.C. Sproul was wrong about baptism (Baptist juke!), but he is still one of the most influential men is solid Christian circles in the 21st century. The problem of getting something wrong in the Bible is not the fault of the Bible, it’s the fault of fallen men. We all have certain presuppositions, backgrounds, and experiences that hinder our understanding of the Bible.

If the Bible is clear on its teaching about frail humanity (and it is!), then we would expect Scripture to be often misinterpreted (and it is!). Thus, the existence of pluralism actually helps defend the doctrine of the clarity of Scripture.

RHE says the Bible “yields multiple interpretations.” What she is failing to adhere to here is a key component when understanding the Bible. That is: Scripture interprets Scripture. Again, the 1689 Baptist Confession of Faith:

“The infallible rule of interpretation of Scripture is the Scripture itself; and therefore when there is a question about the true and full sense of any Scripture (which is not manifold, but one, it must be searched by other places that speak more clearly.” (Chapter 1, Paragraph 9)

This confession is not something invented by man but is taught in Scripture itself. The book of Hebrews exposits Old Testament passages. Jesus explains Mosaic Law. The Apostles consistently interpret the Prophets. Scripture interpreting Scripture is a Scriptural teaching.

Seek and You Will Find

Often, those who complain about the “confusing” message of the Bible are those who do not want to submit to the Bible’s plain teaching. Their time is devoted to the dismantling of Scripture (which cannot be broken!) instead of to understanding its message.

Jesus says seek and you will find (Matthew 7:7). If you are struggling with understanding a passage of Scripture, might I suggest one method for you would be to keep on seeking? My friend, Jim Elliff, recently wrote a Facebook post in which he said:

“From time to time, a Bible reader will encounter what appears to be a historical or factual inconsistency in the Bible. I have so often seen these conundrums resolved through more careful meditation, repeated surveying of all the salient passages in context, apprehension of relevant background information or grammatical and syntactical discovery, that I’ve not been moved off the confidence in His word in its original autographs that I first received.

I know this is not everyone’s experience, nor am I saying that each difficult text is yet resolved, but only that through my own persistent study of the Bible over decades, and the gift of the Spirit, it is what I believe. I’m not embarrassed about it nor do I feel I have to defend in every breath what to me is obvious. My testimony is that we have God’s word in our possession and that we can confidently live by it.”

Keep on seeking! And do so with the resolve that God speaks only truth. Ask the Holy Spirit for help (Psalm 119:18). Sit humbly under the Bible’s teachings. Don’t give up.

And remember what Grudem said?

“The clarity of Scripture means that the Bible is written in such a way that its teachings are able to be understood by all who will read it seeking God’s help and being willing to follow it.”

God is not hiding truth from us in His Word. We live in a society that is frankly quite lazy and inundated with easy entertainment. Reading the Bible can be hard work sometimes. But it’s a worthwhile endeavor! Seek and you shall find. But seek with a heart ready to obey. Let your answer to the Lord be “yes” and then seek out what His Word is instructing you to do.

The Arrogance of “Doubt”

What RHE has proved with her “scholars” is that rejecting the clarity of Scripture is something for the elite. Peons and peasants can believe a Bible that appears plain to them but if they only knew what she knows after years of “research” they would come to see how confusing Scripture really is.

She has repackaged doubt to her readers as though it is a manifestation of Christian humility. But why don’t you try telling the police officer the next time you get pulled over for going too fast that the speed limit sign just wasn’t clear enough to you. That you doubted its authority. See how that goes over.

Doubt, as presented in Inspired, is not noble. It’s actually quite arrogant as it places people into authority over God’s word determining for it what is clear, relevant, applicable, or true. But the Christian position is to sit under the Word, allowing it to speak for itself. Allowing its message to permeate our hearts and minds. Seeing that behind ever jot and tittle stands a triune God who is good, honest, and trustworthy.