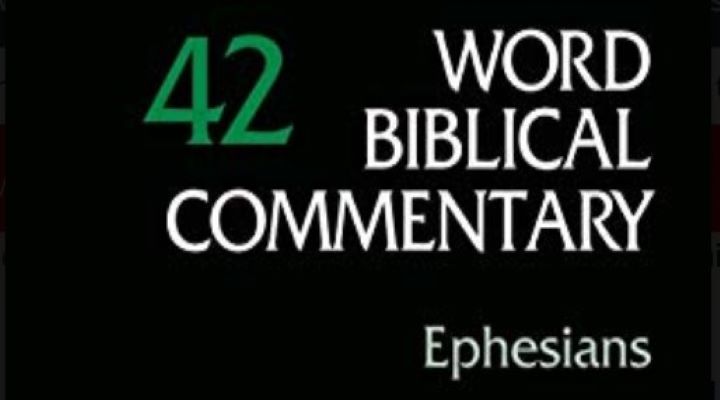 In this review we are continuing our look at the most significant (for good or bad) commentaries on Paul’s letter to the Ephesians. You can find previous reviews here. I have been blessed to teach from Ephesians and hope these reviews will help readers to consider some of the many resources out there. As always, these reviews should be seen as an overview and not a full endorsement or rejection of each author or title under consideration. Enjoy.

Andrew T. Lincoln served as Portland Professor of New Testament Studies at the University of Gloucestershire, England. His other works include Born of a Virgin? Reconceiving Jesus in the Bible, Tradition, and Theology and Truth on Trial: The Lawsuit Motif in the Fourth Gospel. 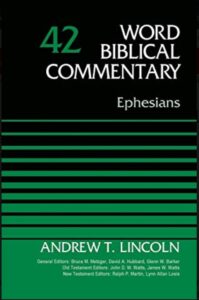 Andrew T. Lincoln’s commentary on Ephesians appears in Zondervan’s Word Biblical Commentary series. The series editors write that their goals for the series were to be “evangelical” in the sense of affirming the Bible as divine revelation and to maintain a commitment to the power of the Christian gospel (ix). Each commentator was asked to produce their own translation of the biblical text and have that translation serve as the base for their commentary and exegesis. In other words, Zondervan desired that this series would be grounded in the original languages while balancing scholarship and accessibility. Each passage is examined through “Notes”, “Bibliography”, “Form/ Structure/ Setting”, “Comment”, and “Explanation.” The hope was that they would offer “something for everyone” with this approach.

Unfortunately, I have to begin this review by focusing on a major flaw which taints the rest of the commentary. Like many commentators, Lincoln includes his views about the authorship of Ephesians and does so early in his commentary. Lincoln writes that he sees three possible options for who wrote Ephesians (lxii). It was either the Apostle Paul himself, a secretary writing with Paul’s consent within his lifetime, or a later follower of Paul. I was disappointed to see that Lincoln holds to the third view, writing that he became convinced that “a later follower of Paul” wrote Ephesians, not Paul himself (lx). Lincoln also makes the frustrating choice to not engage with arguments in favor of Pauline authorship, and instead focus his attention on arguments in favor of his position (lxii).

Throughout this commentary Lincoln cannot avoid having to interject remarks that separate Ephesians from what he and other critical scholars call “the undisputed Pauline letters.” He repeatedly includes awkward phrases such as “Ephesians reflects …”, “… the author of Ephesians …”, and “… this writer asks … (27, 41, 367).” The author asserts that this later follower of Paul was simply using “the literary device of pseudonymity” which was “a widespread and accepted literary practice of both Jewish and Greco-Roman cultures (lxx).” To be clear, Lincoln denies that holding to pseudonymous authorship of Ephesians in any way “(detracts) from the validity or authenticity of its message as part of the NT canon (lxxiii).” Following Meade’s reasoning, Lincoln allows for a distinction between the “canonical” Paul and the “historical” Paul.

Despite Lincoln’s protests I was not able see how his position avoids serious problems in the theology and teaching of Paul’s letters, as well as the rest of Scripture. For example, didn’t the early church point to Paul’s status as an apostle called by the risen Christ as one of the primary reasons for recognizing his writings as Scripture, i.e. canonical? Also, if we can separate a “canonical” Paul from the “historical” Paul, what is to stop us from distinguishing between the “Christ of faith” and the “Jesus of history” the way some German critical scholars have done? In short, how can we trust anything the Bible says if we believe any of was basically forged?

In the section on Ephesians 1:3-14, I think Lincoln rightly connects being “chosen in Christ” to “incorporation into Christ (23)”. He writes, “To say that election in Christ took place before the foundation of the world is to underline that it was provoked not by historical contingency or human merit, but solely by God’s sovereign grace.” Also, in opposition to the Reformed faith, Lincoln denies that election “before the foundation of the world” in verse 4 refers to what he calls “a logical deduction about the destiny of individuals based on the immutability of God’s decrees (24)”.

In his look at the “household codes” in Ephesians 5:21-33, Lincoln appears to be broadly complementarian. He sees the text as teaching the wife’s voluntary submission to her husband in the marriage as a reflection of the church’s submission to Christ (368). The husband’s headship is to reflect Christ’s headship, including the giving of his life for his bride (370).

As a believing student of the Bible, I am faced with a challenge when reviewing books like this. I cannot compromise on the reliability and authority of the Bible and at the same time, I think it is a mistake to be dismissive of, let’s say “problematic” books like this one. Andrew T. Lincoln is surely a notable scholar and this series of commentaries have gained a respected following by Bible scholars. As I have laid out above, there are some sections in this commentary where I think Lincoln was helpful and affirms some orthodox teachings. The problem is that readers will have to keep in mind the fact that Lincoln’s does not believe the Apostle Paul actually wrote Ephesians. For these reasons, I cannot recommend this commentary other than for discerning completists.