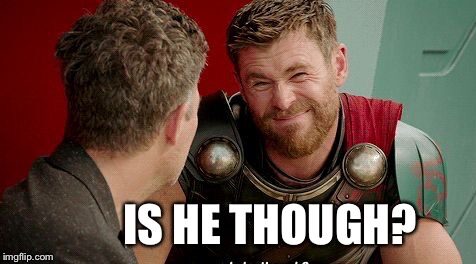 The Enemy of Your Enemy May Not Be Your Friend

There’s a pretty well-known quote that goes like this:

The enemy of my enemy is my friend.

The idea is simple enough: if you have an enemy, someone else who is an enemy of that person is someone with whom you now have something in common. And he may even be a person whom it would be wise for you to team up with in your battle against this common enemy.

Thus, the enemy of your enemy IS your friend.

I am going to prove to you that this is not necessarily true. Especially if you are a Christian. Stay with me. I have a point I want to get to but we need to set things up a bit first. Jesus tells us that a kingdom divided against itself cannot stand. 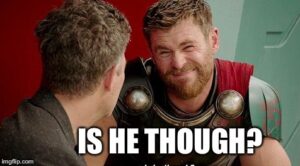 Since all of humanity can be neatly divided into two groups: those who follow Christ and those who follow Satan1, Christians can rightly say that anyone who is on Christ’s side is on their side and anyone who is not is on the other side. Yet what you will see in this world is that Satan’s kingdom is utterly divided. Jesus didn’t say Satan’s kingdom is divided in the above quote…but I think knowing that a divided kingdom cannot stand should give us hope.

What I mean is that if you have seen the chaos and confusion that marks the followers of the devil, you should be hopeful knowing that Jesus effectively condemns a divided kingdom in Matthew 12.

But since so many of Satan’s followers disagree with one another, it is not necessarily true that any of them are friends of Christians. You may have someone who seems to agree with you on one point of righteousness who is Christ’s enemy in another way. For example, Roman Catholics being generally opposed to abortion2 doesn’t make them the friend of Christians in that culture war against abortion. So even though they appear to be the enemy of the abortion industry, that hardly makes them friends of those who know the true gospel!

So Who is Sage Steele? 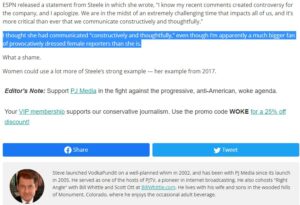 You can click this photo to see it enlarged in case this is removed by PJ Media.

Here’s where it gets interesting. Sage Steele was suspended from ESPN for controversial comments about mandates, Obama, and the immodesty of female reporters. You can read the report by Stephen Green of PJ Media below. It’s a well-written article that drives home a couple of good conservative talking points articulately. You don’t have to if you aren’t interested.

But as well done as this article was on the normally-on-the-right-side-of-issues PJ Media, Green utterly loses credibility in my mind at the end when he writes (emphasis mine):

I thought she had communicated “constructively and thoughtfully,” even though I’m apparently a much bigger fan of provocatively dressed female reporters than she is.

To be fair, I am a skimmer and Garrett pointed out to me that his article was peppered with other instances that are questionable as well!

So let me bring this all home for you. Stephen Green, a.k.a. Vodkapundit, “lives with his wife and sons in the wooded hills of Monument, Colorado, where he enjoys the occasional adult beverage.” Yet he is publicly embarrassing himself and all of PJ Media by proclaiming his lustful heart. Even if he weren’t married, his statement is filthy. Yet this is what we are faced with in our world. Some of the people who are most vocally fighting some of the inanity and evil of our day are also people we need to recognize as God’s enemies, just in a different way. And I don’t think Green’s article is worth sharing now, even for the good that it says.

My concern is that many professing Christians will read an article like Green’s with that quote where he exposes himself as an adulterer-at-heart who objectifies women and not even bat an eye. I fear that many Christian men actually feel the same way as he does. So they’ll march into a school board meeting and demand that their kid go to a government school without a mask, or oppose transgenderism being taught to their 5-year-olds, while lusting in their heart at the women whom ESPN knowingly puts on display to attract men sexually.

Stephen Green’s adultery of the heart won’t affect my home life or my job in the same way a vaccine mandate may, but I need to be more jealous for God’s glory than for my own comfort. We can’t pick and choose the evil we want to fight. We must stand against all unrighteousness of men and proclaim the saving gospel of Jesus Christ, even to those who may be fighting some of the same battles we feel we need allies to fight. Christians can and must continue to strive to be separate and be careful with whom they make alliances. Remember, it isn’t the Taliban or a pack of homosexuals that are most known for murdering Christians historically. The Roman Catholic religion—the closest religion to biblical Christianity if you compare doctrine for doctrine—is one of the largest perpetrators of Christian persecution. And don’t think for a second it will be different in the 21st century.

For they have committed adultery, and blood is on their hands. With their idols they have committed adultery, and they have even offered up to them for food the children whom they had borne to me. Moreover, this they have done to me: they have defiled my sanctuary on the same day and profaned my Sabbaths. For when they had slaughtered their children in sacrifice to their idols, on the same day they came into my sanctuary to profane it. And behold, this is what they did in my house.