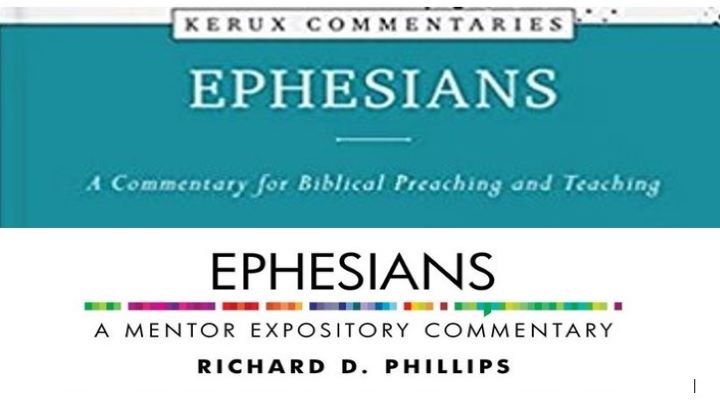 With this article, we are continuing our recurring series of reviews looking at notable commentaries on Paul’s letter to the Ephesians. I have been blessed to teach from Ephesians and hope these reviews will help readers to consider some of the many resources out there. You can find previous reviews here and here. As always, these reviews should be seen as an overview and not a full endorsement or rejection of each author or title under consideration. Enjoy.

Gregory S. Magee serves at Taylor University as associate professor of Biblical Studies and Chair of Biblical Studies, Christian Ministries, and Philosophy departments. His other works include Portrait of an Apostle: A Case for Paul’s Authorship of Colossians and Ephesians and Studying Paul’s Letters with the Mind and Heart.

Jeffrey D. Arthurs is dean and Robinson Chair of Preaching and Communication at Gordon-Conwell Theological Seminary. He is also the author of Devote Yourself to the Public Reading of Scripture and Preaching as Reminding: Stirring Memory in an Age of Forgetfulness. 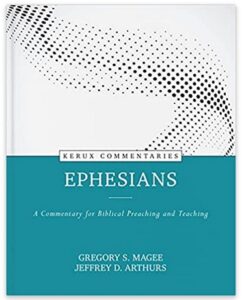 The Kerux Commentary series from Kregel takes its title from the Greek word for “one who proclaimed the official announcement of the king (7)”. In the same way, the editors have expressed their hope that this series will equip preachers and teachers to share “the message of our divine King.” Commentaries in the Kerux series take a three-pronged approach to each passage of Scripture. First, exegetical analysis is done, looking at the original languages, grammar, historical background, and so on. Next is a theological focus informed by the exegetical analysis, bringing out “truths that transcend time and culture.” Finally, the authors provide strategies for preaching and teaching the text. The editors intentionally pair up experts in their respective fields. In the case of Ephesians, Magee was tasked with exegetical and theological duties and Arthurs handles preaching and teaching considerations.

I was relieved to see that Magee and Arthurs affirm that Paul actually wrote Ephesians (31). They provide enough discussion on the issue of authorship to give readers a sense of the debates over the issue, but not so much that it becomes overwhelming or distracts from the task of preaching and teaching the text. They estimate that around 60 or 61 AD, Paul wrote the epistle while under Roman imposed house arrest.

As other commentators have pointed out, Ephesians is composed of 3 chapters addressing right doctrine and 3 chapters on right practice. Magee and Arthurs write that, while this is true in a broad sense, Paul also weaves both doctrine and practice across the letter as a whole (44). I found this image of interweaved orthodoxy and orthopraxy to be a helpful one.

The authors identify 4 primary theological themes across the whole of Ephesians (42-44). First is being unified with Christ, meaning that “Believers … share in Christ’s divine life through their union with him but also share in one another’s experience as well (43).” Next, union with Christ serves as “the gateway to an ongoing life of walking with Christ.” The believer’s life and walk with Christ are marked by holiness and love. Third, Ephesians presents Christ’s authority in heaven and earth. The authors write that “Christ’s supremacy is a settled fact in the heavenly places, but the world awaits the full, visible expression of his reign (44).” Finally, believers are called to “sit”, “walk”, and “stand”. By way of Christ’s position, God’s people are seated with him in the heavenly places (cf. Ephesians 2:6), they walk accordingly (cf. Ephesians 4:1; 5:1), and can stand strong against the forces of darkness (cf. Ephesians 6:10-12).

The editors of the Kerux series have identified their primary audience as active preachers and teachers with at least some knowledge of Greek and Hebrew. That being said, the authors of this volume appear to have provided translation for most, if not all, Greek words used. Despite having no formal training in the original languages, I was never lost or confused when Greek was referenced. I also appreciated the many helpful discussion questions and recommendations for further reading that were provided. The authors of the Kerux Commentaries: Ephesians have succeeded in giving the church a solidly orthodox commentary with more than enough suggestions for practical application.

Richard D. Phillips has served as Senior Minister at Second Presbyterian Church in Greenville, South Carolina (PCA) since 2007. He previously served in the U.S. Army and taught leadership at West Point. His other works include The Masculine Mandate and The Reformed Expository Commentary on Hebrews.

The Mentor Expository Commentary series from Mentor/ Christian Focus features authors who hold to the inerrancy of Scripture. The series is aimed at the preacher/ teacher who desires to take an expository approach and the lay reader who wants to go deeper in their own Bible study. 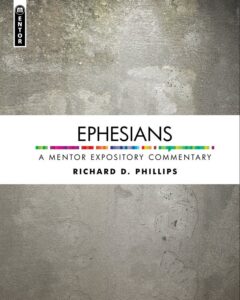 Surprisingly, there are no introductions or forwards at all in this commentary. Phillips and his editors simply jump right into his exposition of the text of Ephesians. I found this to be a refreshing choice after reading through so many lengthy introductions you would normally find in works like this one. The book itself is a nice hardcover with an elegantly curved spine. In other words, both the presentation and the content are high quality.

Nearing the end of his first chapter, Phillips expounds on Ephesians 2:4 and frames grace in three ways (6). First, grace is an attribute of God. Next, grace is the way of salvation. Finally, grace is “God’s power working in us for newness of life.” I found the author’s framing on this point to be an extremely helpful remedy for the dangers of either oversimplifying grace or making it so murky and ill-defined that we don’t know what we’re talking about.

With God’s grace in view, Phillips is able to move on to specific ways in which God demonstrates grace. He begins Chapter 5’s, “Predestined as Sons” with a personal story from his own life (29-35). After recounting the circumstances under which God called him away from a successful career in the military and into full-time ministry, Phillips describes the change that was brought about in his life. God brought him to a place where he finally admitted and recognized that his life up to then was defined by his status as a “son of the Army.” Post conversion, the author now had a newfound identity and security as a son in God’s family (29).

In his look at “Prayer and the Sovereignty of God” in Chapter 17, Phillips effectively lays out the perceived tension between God’s sovereignty and the need for prayer (123-124). He argues that if Paul’s certainty about God’s sovereignty was a deterrent to prayer, we would expect to see that played out in his writings. Instead, “all his letters overflow with prayer like flowers blossoming in a garden (124).” He continues, “Paul’s grand view of God’s sovereignty supplies a compelling reason for us to pray, namely, to give praise and thanks to God for his grace (125).” Phillips explains how God’s sovereignty gives us every reason to pray, every need to pray, and every encouragement to pray (124-128).

The author later returns to the theme of prayer while covering Chapter 64’s Ephesians 6:18-20 (449-454). He writes, “… many of our greatest battles will be fought in the quiet place of prayer, our secret weapon (449).” Phillips demonstrates that Paul wanted to equip believers in their commitment to prayer, empowered by the Holy Spirit, and with alert perseverance in prayer (449-452). Next, he explains how Paul charged his readers to pray on behalf of others without neglecting themselves, and finally to recognize their obligation to pray, like Paul, as ambassadors engaged in spiritual warfare on behalf of the Lord Jesus Christ (452-454).

In his Mentor Expository Commentary on Ephesians, Richard D. Phillips effectively balances doing accessible, lay-level explanation and application of the biblical text. At the same time, he also demonstrates that he has done the scholarly homework through a variety of sources found in the provided endnotes. The emphasis of this commentary is on the faithful preacher and teacher presenting God’s Word to God’s people in the trenches. Highly recommended.

Copies of each book were provided by their publishers in exchange for an honest review.