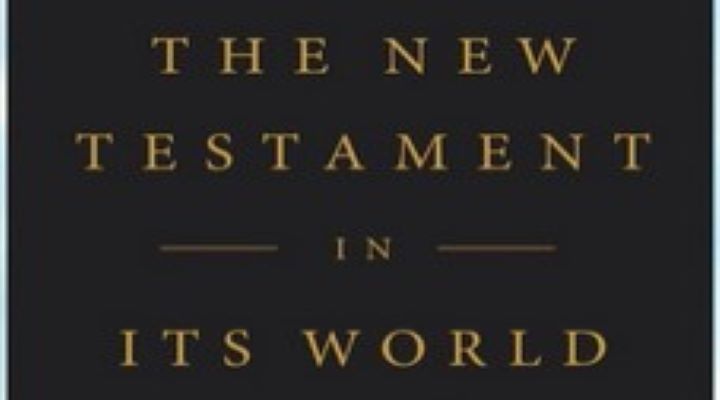 Book Review — The New Testament in Its World: An Introduction to the History, Literature, and Theology of the First Christians

Wright, N.T. and Michael F. Bird, The New Testament in Its World: An Introduction to the History, Literature, and Theology of the First Christians. Grand Rapids: Zondervan Academic, 2019. 992 pp. $59.99 N.T. Wright is the Chair of New Testament and Early Christianity at Scotland’s University of Saint Andrews. He also served as Bishop of Durham. His other works include The Resurrection of the Son of God, What Saint Paul Really Said, and Justification: God’s Plan and Paul’s Vision.

Michael F. Bird is Academic Dean and a lecturer in theology at Ridley College. He is the author of Evangelical Theology: A Biblical and Systematic Introduction and Jesus the Eternal Son: Answers to Adoptionist Christology and also co-authored Trinity Without Hierarchy: Reclaiming Nicene Orthodoxy in Evangelical Theology.

We are blessed to live in a time when there are many Old and New Testament Introductions to choose from. As a seminary student and lay teacher in my church, I have grown to appreciate the helps that a good Introduction can provide. I have previously reviewed one example from Crossway and in the near future we will review a more recent example from G.K. Beale and Benjamin Gladd published by IVP.

The New Testament in It’s World comes from N.T. Wright and Michael F. Bird, published by the good folks at Zondervan Academic. The book originated with an idea from Bird to put together a distillation of Wright’s work up to that time and put it into the form of a NT Introduction. Quotes from the NT text are normally taken from Wright’s personal translation. I will also mention in passing that Wright makes the odd choice of referring to the person of the Holy Spirit in all lower-case lettering, ie. “holy spirit”, “the spirit”, etc. In the preface, the authors say that their goal was to provide help introducing Jesus, the early church, and the writings which came out of that context (25). As we will get to, the pros and cons of Wright’s scholarship will factor into if and how you should make use of this book.

First, the effort and support that Zondervan has put behind this material and the book itself are commendable. There are vivid color photos and illustrations throughout. There is also a clever series of “Emails from the Edge” in which an imaginary student and professor write back and forth about the issues discussed in the book. There is a Bibliography (891), Scripture and Other Ancient Literature Index (925), and Subject Index (959). Zondervan has also produced accompanying DVDs, Study Guides, and online videos. They obviously intended this to be a widely used resource and reference work. My only complaint about the book itself was that because of the smaller height and weight, but thicker spine and stiff binding, it does not lay flat, much less stay open on its own.

Nevertheless, N.T. Wright has become known as one of, it not the primary advocate for the so called “New Perspective on Paul.” My friend George Alvarado and I go into detail about Wright and NPP here and here. You can also find my reviews of NPP critical books from the paedo-baptist and credo-baptist perspectives. Love him or hate him, it is a mistake to uncritically dismiss or celebrate Wright. He has made some serious claims about how we should understand the Apostle Paul and what the Bible teaches about how we are justified before God. For this reason, I will primarily focus my review on Wright’s claims about Pauline theology and the doctrine of justification.

When we get to the book’s section on “Paul and the Faithfulness of God”, Wright makes the interesting choice to begin with the Letter to Philemon as his “launching pad” to introduce Paul’s theology. He persuasively asserts that Paul’s theology is pastoral, “in the sense that the shepherd needs to feed the flock with clean food and water, and keep an eye out for wolves.” (366). So far, so good. Wright also explains that he sees Monotheism, Election (as he defines it), and Eschatology as the 3 primary emphases in Paul’s theology (370). However, in the section on Romans, Wright lays out his arguments for what Paul was saying.

Wright has been critiqued in the past for providing little or no acknowledgement or interaction with the primary sources from the Reformers he has been so critical of. With that in mind, I appreciated the decision in this volume to include a lengthy quote from Luther himself about his rediscovery of justification by faith (512). Luther dreaded the thought that “the righteousness of God” in Romans 1:17 referred to God’s justice in punishing sin. Luther knew his own sinfulness and how deserving he was of God’s wrath. When Luther came to see “the righteousness of God” as the righteousness whereby God justifies sinners by grace through faith, this crucial passage became a sweet “gateway to heaven.” For Wright, the focus of the passage is not about God’s gift of “a righteous status” given to people, although he seems to admit this gift is a consequence of “God’s faithful, saving action.” (513). Instead, he sees “the righteousness of God” as referring to “God’s own in-the-rightness, his faithfulness to both covenant and creation”.

In Part VII on “The Early Christians and the Mission of God”, Wright dedicates Chapter 31 to “Letters by Jesus’ Brothers: James and Jude”. This section was of particular interest to me since I have been teaching through the Letter of James at my local church. How does Wright handle the thorny issues surrounding James 2? He rightly (no pun intended) says that there has been “apparent … tension between James and Paul” (744) and “the apparent discrepancy between James and Paul dissipates when we observe what they are each arguing for and against.” (745). One might hope that Wright would stop there with the affirmation that Paul and James can and should be harmonized. Unfortunately, all that is undone on the next page. Wright says that James and Paul agree that “the word of truth brings salvation and transformation” (746), but then he continues:

“James and Paul do materially disagree on the significance of Genesis 15:6. Paul employs the passage to prove that Abraham was justified prior to his circumcision: James opts for a standard Jewish approach that read Abraham’s willingness to sacrifice Isaac (Gen. 22) as the reason he had righteousness credited to him proleptically in Genesis 15.6. Different readings of the same text merely show us that Paul and James are part of the richly diverse traditions of Jewish scripture-reading.”

If there were any doubts about what Wright is saying, they are cleared up by Table 31.2: “James and Paul on ‘Faith’ and ‘Works’”, on the same page, directly about this quote. In the column summarizing James’s supposed views on “works”, they are defined as “Loving expression of faith in action. Such works are required for justification.” (emphasis added). In other words, Wright seems to be saying that according to James, works are a necessary component of justification, not merely evidence that a person actually possesses saving faith. We are not given any interaction with the rich history of Protestant teaching and scholarship which has argued that James is not teaching that works contribute to justification. To be fair, while Wright does not interact directly with his theological opponents, many of them are included in the lists of recommended “Further Reading” at the end of each chapter.

The New Testament in Its World is a skillfully produced NT introduction with much to commend it. Zondervan has put a lot of effort and support into this volume across multiple platforms. It would be a mistake for any serious student to ignore the scholarship of NT Wright. At the same time, it would be a mistake to blindly accept Wright’s views about the doctrine of justification. His claims impact the blessed assurance sinners can have that they are truly saved by grace alone through faith alone in Christ alone apart from any works. Let the reader beware.