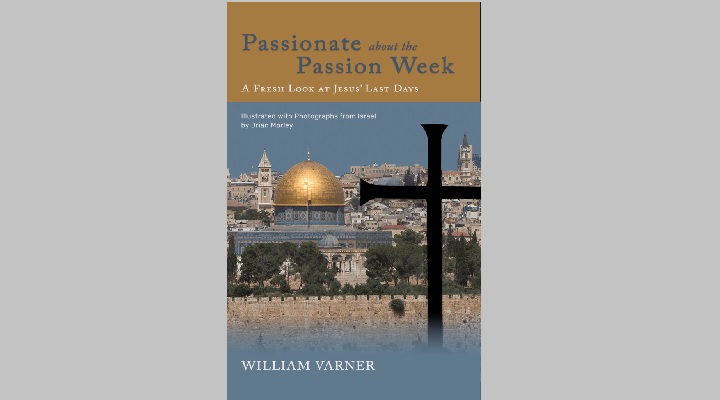 Book Review — Passionate About The Passion Week (Part 1: The Good) Dr. William Varner is a well-established Master’s University professor and experienced linguist. His exegetical and historical skill is fairly known among those within the biblical linguistics community, and those who have heard him speak at the seminary, or as a guest speaker. Nevertheless, as skilled as Dr. Varner is, this book has some theological concerns that should raise the eyebrow of any pastor or theologian. Although I would recommend getting a copy of this book for its historical value concerning the Passion Week of our LORD, and for some of the insights into how Christ fulfills what was written in the Old Testament, I advise caution and discernment in some areas, most especially his thoughts on the atonement of Christ. With these in mind, this post will look at the good in Passionate About the Passion Week.

There are several things I enjoyed about this book.

It may seem petty, but I love a good quality cover and paper. Also, pictures of things like Herod’s Temple, the Court of the Gentiles where Jesus would have challenged the money changers, the whitewashed tombs, and the cave of Gethsemane, really help someone like me imagine the events with greater detail. The publisher, Fontes Press, has done a great job publishing a quality product.

Readability and Intention of the Author

As Varner stated, the book was not meant to be “overly academic and can be read by anyone who has a love for the Lord and his word” (p. 3). He took his wife’s advice to “write a book for the rest of us.” Mission accomplished! The style of writing, coupled with the short 120-page count, is something that made this book easily digestible even for a new Christian. I was able to finish it in two nights! And at the end of every chapter, Varner includes resources for further reading and a prayer of application. Chapter 8 is highly recommended concerning how Jesus’s unjust trial teaches us to endure suffering when treated unjustly.

Also, his intention for writing this book is worth a commendation. He challenges the traditional ways we’ve read some of the events of Passion Week and draws us to see how we’ve unscripturally handled them in light of history and the text. I am a fan of any author that seeks to be more precise, bringing a perspective that perhaps has been overlooked, or even purposefully ignored because of tradition. So I am thankful for Dr. Varner in venturing out on this particular topic.

Dr. Varner presents some compelling cases as to the timing of certain events as well as their locations. For instance, the Triumphant Entry of Jesus into Jerusalem (a.k.a. Palm Sunday) should be identified as Palm Monday. You talk about a historical rewrite! One interesting point Varner makes is how that day would have been Nisan 10 on the Jewish calendar (p. 17), which would have been the same day that Jesus would be presenting himself as Messiah — Israel’s Passover Lamb!

Other points about that were worth noting was how Calvary, where Jesus was crucified, was not on a mount or hill (p. 79), contrary to popular belief and songs, and how the Garden of Gethsemane wasn’t actually a garden but a cave which is less than 100 yards away from the traditional garden location (p. 60). He also provides arguments as to why Friday was indeed the day Jesus was crucified, using Scripture alone for his defense. And finally, though not exhaustively, it was convicting for me when Varner pointed out how:

Evangelicals rightly celebrate Good Friday, and Resurrection Sunday, but we ignore Ascension Day, which was May 30 in the year 2019. (p. 107)

This is indeed a valid point to consider in the years to come for me.

The Unjust Trial of Jesus

Chapter 8 was probably the most humbling reminder of the unjust condemnation of our LORD. Varner details the Mishnaic Laws that governed how trials were to be conducted. Over and over again, the Jews violated their own laws in order to bring the death sentence upon Jesus. Here are just a few:

And the list goes on. But the worst part is that this was all done at night, and expediently, most likely so that all those who were Jesus’ sympathizers and followers could not resist (p. 75). And one of Varner’s main points is that the crowds that condemned Jesus were not “fickle” Jews. Jesus had faithful followers. And those were the same crowds who heard him gladly (Mark 12:37). But the crowd that gathered to put him to death was a different crowd altogether! It was like selecting a jury that would only bring the verdict they wanted.

Varner uncovers an uncommon truth about Psalm 118 and the role it plays during Christ’s passion. He points out that while Psalm 110 is most often cited by the New Testament authors, “Psalm 118 with all its allusions, is a very close second” (p. 57). “No less than four times,” he says, “this psalm came into view as a part of the drama of redemption being enacted during those awesome days” (p. 44).

First, Psalm 118 is shouted with praise during the Triumphant Entry on Palm Sunday…er, Monday (Matt. 21:9). Then, Jesus quotes a portion of the psalm again after the parable of the vineyard owner (Matt. 21:42), which teaches on the Jews’ rejection of Jesus, and the coming judgment, that ultimately leads to Christ being exalted. Afterward, Jesus rebukes the Pharisees with woes and then weeps over Jerusalem for their rejection, as he declares “For I tell you, you will not see me again until you say, ‘Blessed is he who comes in the name of the Lord!'” (Matt. 23:39), which also comes from Psalm 118.

And finally, the historically edifying part.

During Jesus’ Last Supper with his disciples, Varner expounds on the historical perspective of the Passover Seder (pp. 54–56) as it relates to our redemption and how Psalm 118 was utilized. He notes how during the meal (and even today), Jews would sing songs. More specifically, the Hallel Psalms — Psalms 113 thru 118. The first three were before the meal, and the last three were after the meal. So when the Bible says that they sung a hymn (Matt. 26:30), the end of that singing would have included Psalm 118:26, which Jesus said Jerusalem would not see him again until they said these words (p. 56). Thus, this was fulfilled as Jesus said it would be prior to his reappearing to be crucified.

Indeed such a carefully woven narrative of fulfillment can only be crafted from the hand of the Spirit of God.

More History, But No Time

Despite its thin binding, this work has a weighty historical value that is easily referenced and understood. And there is more material to share, but so little space and time. And as promised, these are just some of the reasons I would recommend this work by Varner. In future posts in this series, I’ll discuss the odd, the concerning, and my final thoughts.