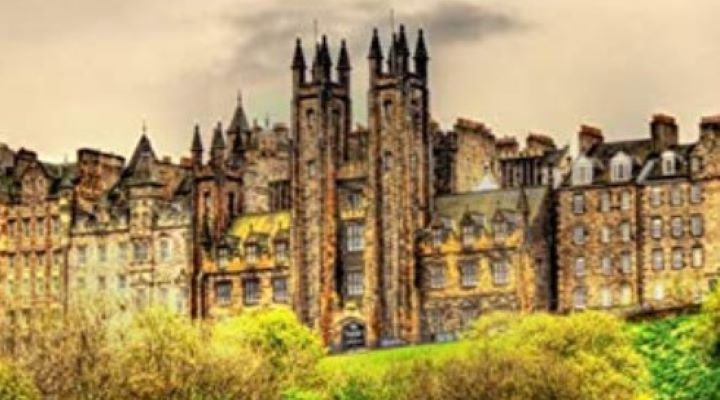 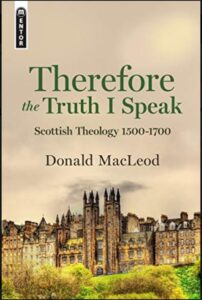 Donald Macleod was Principal of the Free Church of Scotland College in Edinburgh until his retirement in 2010. He also served as Pastor of Kilmallie Free Church for 6 years. His other works include The Problem of Preaching and Compel Them to Come In: Calvinism and the Free Offer of the Gospel.

Donald Macleod’s wonderful new book, Therefore the Truth I Speak: Scottish Theology 1500–1700 began as a series of lectures he gave from 2001 to 2004 while teaching at Free Church College, which later became Edinburgh Theological Seminary (7). The book is composed of 13 chapters followed by a name and subject index. The author acknowledges that the book covers the narrow subject of Scottish Christianity from the 16th to 18th centuries, and yet in the process, it also addresses timeless concerns like the authority of Scripture, justification by faith alone, and what faithful Christian witness looks like. In other words, the book is about a specific time and place but also deals with vital subjects that every Christian in every age should concern themselves with.

What were the distinctives of Scottish Christianity from 1500 to 1700? Macleod, firmly within the Presbyterian tradition, lays out what he sees as the two primary governing convictions that his Scottish theological forefathers held to (11). First, church polity should follow the apostolic model as much as possible. Second, the health of churches and their effectiveness in missions will increase when the apostolic model is followed.

The author shows appreciation for the historians who came before him, while also taking issue with those like T .F. Torrance, who he says have parted company with the stream of “Federal Calvinism” that characterized the Scottish theologians of that era (12–13). Macleod’s sympathies are with those historians who recognized diversity on issues of baptism and church governance, while also not denying the “remarkable consensus” grounded in Scripture and expressed in the great ecumenical creeds and Reformed confessions (13–14).

Macleod ably disproves the stereotype of Scottish theologians as uneducated dunces. These men were focused on bringing the gospel to the ordinary church goer, not on impressing the academy (16). The earliest Scottish Reformer was Patrick Hamilton, born in 1504. Hamilton was one of many who became inspired and impassioned by Luther’s rediscovery of justification by faith alone (19–20). His zeal to reform the church and irresistible desire to return to his Scottish homeland resulted in his arrest by the established church. In 1528, he was martyred by being slowly burned at the stake. Hamilton left readers his Patrick’s Places, in which he affirmed the teaching that works of the law cannot be fulfilled apart from divine grace (20). He also viewed the law’s purpose as the revealing of sin.

Echoing Luther (not to mention Paul), Hamilton wrote that “faith (alone) makes a man a member of Christ, an inheritor of heaven, and a servant of God (21).” Saving faith grasps Christ alone as its object. Like Calvin before him, Hamilton would say that faith alone justifies, and yet the faith which justifies is not alone (22). When the established church contemplated more executions by burning to quell the spread of Reformed doctrine, John Lindsay counseled against the idea, saying that “the smoke of Mr. Patrick Hamilton hath infected as many as it blew upon (22).”

The Lex, Rex was a political manifesto by Samuel Rutherford in response to John Maxwell’s Royalist treatise (239). He argued that when human society organizes into a form of government, by common grace they are affirming natural law. Rutherford, contra the monarchy of his day, believed that Romans 13 does not teach an absolute, de facto obedience to whomever happened to be in power at any given time. A lawful magistrate is God’s minister for the commonwealth’s good, such that unjust, murderous magistrates who persecute the church are no longer ministers of God and should be resisted (241). Rutherford drew from Scripture, the Old Testament in particular, as well as natural law or what the Reformed called “the light of nature (240).” The impact of the Lex, Rex was far reaching and it enabled Scottish Presbyterians to defend their views during the English Civil War.

Charles I was the target of much of Rutherford’s criticism. While Rutherford would not go so far as to call Charles a tyrant, he did judge him guilty of tyrannous acts (250). Macleod provides one disturbing example from 1628 involving Alexander Leighton’s publication of Zion’s Plea against the Prelacie. The work was critical of the Bishops of the official church as “intruders upon the privileges of Christ, of the King, and the Commonwealth.” Leighton was arrested and held for sixteen months before learning the crimes he was accused of, leaving him too weak to appear in court. He was sentenced to … let’s just say “disfigurement”, fined, and imprisoned for another twelve years. The brutal treatment of Alexander Leighton was orchestrated by the Court of Star Chamber. The Chamber was dedicated to defending the monarchy, specifically the rule of Charles I. For Rutherford, God’s people were suffering unjustly and the duty to resist the monarchy and call for Charles’s removal was clear (251).

So how does the Lex, Rex connect to the American Revolution? Macleod points out that while the Declaration of Independence speaks of “Nature’s God” and recognizes the Creator’s providence, it lacks biblical proof texts like those employed by Rutherford (258). America’s founding fathers were clearly not secularists, but neither were they explicitly evangelical. Unlike the American ideal of religious freedom, Rutherford advocated for banning Jews and Muslims from public worship and for keeping anyone outside of the established religion, including Roman Catholics and Baptists, from holding public office (261). I appreciated the fact that Macleod does not shy away from inconvenient details such as these.

Historians have argued a man named John Witherspoon was the link between Rutherford and the American experiment (264–278). Witherspoon was a Scottish Presbyterian minister who found himself in the American colonies. He caught the attention of John Adams who called him “A clear, sensible Preacher (277).” Witherspoon expressed support for lawfully resisting English rule, and in May of 1776 he preached a sermon in which he announced “the cause in which America is now in arms, is the cause of justice, of liberty, and of human nature (273).” Somewhat anticlimactically, Macleod makes the case that the connection between Witherspoon and Rutherford has been overstated at best. Witherspoon never made direct reference to Rutherford or the Lex, Rex in his sermons or writings. Instead, Macleod argues that Witherspoon was simply part of an ongoing stream of “Presbyterian theology of lawful resistance.”

As the Reformation grew in Scotland, its critics continued their objections. Some theologians argued that the Federal Theology of the Westminster Standards “bred a lack of assurance (381).” Macleod points out that concerns over assurance of salvation had been around long before the emergence of Federal Theology. Going back to the Old Testament, believers have not been immune to doubts. The Psalmist laments his experience of feeling “counted among those who go down to the pit, and whom God remembers no more.” ( Psalm 88:5). Macleod crisply argues “it surely reflects a degree of impetuous bias to charge Federal Calvinism with fomenting a lack of assurance while at the same time ignoring the fact that both Arminianism and Romanism rule out the very possibility of assurance (382).”

Macleod lays out the ways that Scottish pastors like David Dickson sought to provide spiritual “therapy” to believers (383-384). Dickson encouraged appropriate self-examination both as confirmation that the believer is regenerate and as a means to assess the believer’s spiritual health. Dickson taught that believers could have full assurance of the knowledge that nothing can separate them from the love of God (cf. Romans 8:39). At the same time, the believer must recognize that he calls out to God as a wretched sinner (cf. Romans 7:24).

Macleod also examines the “marks of grace” in the Christian life as proposed by George Gillespie. Gillespie asserted that the marks are “full of blemishes and cannot stand rigorous divine scrutiny,” and yet when seen as “fruits of a faith that looks to Christ alone for salvation,” they can serve as evidence that the believer has begun to strive for obedience, imperfect through it may be (384). The marks are sufficient to bring the true Christian to assurance, however his mind may still resist apart from the Spirit’s testimony (385). Macleod explains the need to distinguish between these “marks” and the Spirit’s witness that the formerly lost sinner has been made right with God (cf. Romans 8:16). It is assurance of adoption which prompts the believer to cry out to God “Abba, Father” (cf. Galatians 4:16).

I was fascinated to learn that even in the 17th century, ministers were already aware that spiritual health can be affected by mental illness (387). Dickson recognized that doubt may be connected to what he called “Hypocondrick Passions and Perturbations of Mind.” He encouraged pastors and physicians to work together for both the spiritual and medical health of their people. Macleod writes, “Such observations are more valid today than ever, and nothing is to be gained by pitting pastor and psychiatrist against each other. Conversion does not result in an instant change of temperament (388).”

Scottish theologians also recognized that there are a variety of conversion narratives. Some are dramatic conversions with a clear-cut before and after in the believer’s life, while others experience a lengthy period “under a spirit of bondage before receiving the consolations of the gospel (388).” Assurance may be hindered by the assumption that only one type of conversion experience is normative.

While most of these Scotsmen never produced a comprehensive systematic theology of the covenants like Witsius, they were obviously conversant with the biblical covenants and solidly Reformed in the Westminster tradition (389-391). The believer’s assurance of salvation is ultimately to be found in God’s faithfulness to His covenant promises.

Donald Macleod’s beautiful new book, Therefore the Truth I Speak is an engaging look at Scottish theology that mines the past and brings it into the present. Part church history, part historical theology, this book introduced me to some fascinating figures and events. Recommended.