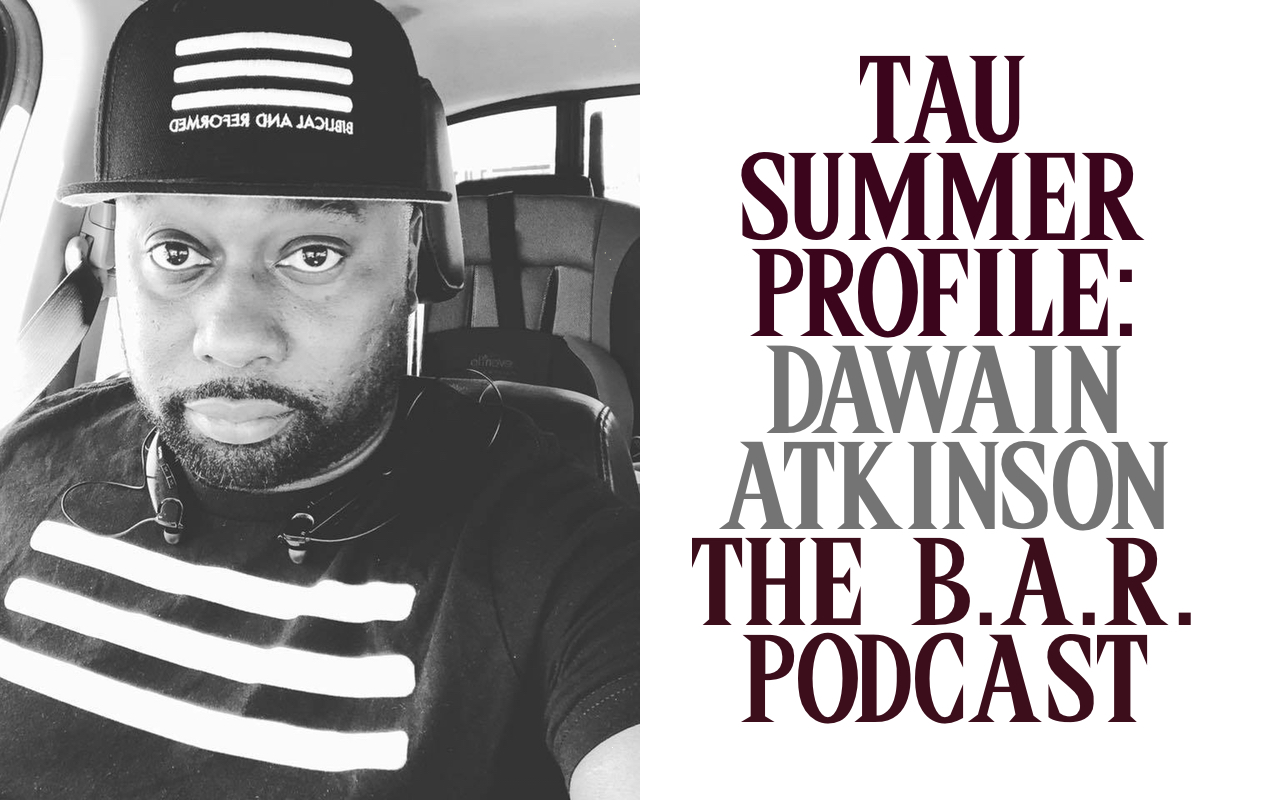 The Hardest Working Man In Podcast Land: An Interview With Dawain Atkinson

The B.A.R. podcast host Dawain Atkinson often includes the hashtag #hardestworkingmaninpodcastland at the end of his social media posts. He’s probably right, and, by God’s grace, he’s not stopping any time soon.

If you take a second to check out his iTunes podcast page, you’ll see why The B.A.R. is so influential in Reformed circles. Dawain’s feed is full of interviews with reputable theologians and pastors who love the Word and love God’s people. He also interviews and cares deeply for local and lesser-known pastors who faithfully preach and shepherd the flocks in their contexts.

He doesn’t mess around. He truly is, I believe, “the hardest working man in podcast land,” and his listeners love and hunger for more of what he puts out. He’s interviewed Mark Dever, Kevin DeYoung, Burk Parsons, Michael Kruger, Ligon Duncan, Costi Hinn, Gabe Hughes, and Justin Peters, among others.

“Truly, I have to say that I have seen God’s providence most when it comes to getting these well-known guests. I don’t have a secret formula. I get asked all the time, ‘How you get these guests?’ It has to be God’s providence to lay it on the hearts of these men to be on my show. Aside from that, we have listeners all over the world. That’s mind-blowing to even say, but it is true. I am humbled and grateful for that.”

While he’s thankful for all of his guests, one interview sticks out more than the others.

“My favorite show has to be my interview with Mark Dever. He truly cared whether I was truly a believer or not,” Dawain said. “He asked me so many question pre-show that I was nervous before the show started. This rarely happens, but Mark had me on my toes.”

Go and listen to the show for yourself. Dever was pastoral and direct. Dawain and his co-host were concerned about an agnostic co-worker, so they asked Dever, a former agnostic, how to approach him.

“He [Dever] said, ‘I pray that you care more about the soul of your co-worker than you do this podcast.’ That statement hit me in the middle of my heart. I was almost speechless, because I put a lot of time, care, and money into the podcast. He reminded me that souls are more important than podcasts. This was life changing.”

Fame and fortune don’t interest Dawain. The Gospel drives the hardest working man in podcast land to hone his craft. “Growing up in Turkey, North Carolina was awesome, and I wouldn’t change it for anything,” Atkinson told us. “My mother was an only child, and my father was number 7 of 17…We lived on a farm with hogs, chicken, and goats. We did share-cropping with one of the guys in the community, so I grew up picking squash, pepper, and cropping tobacco. I remember waking up before the sun comes up to pick a few baskets of squash, and then coming home and getting ready for school. In the summertime we were always doing stuff, either on the farm or in a field. I think that hard work early in my life gave me a work ethic that I still have today in all my endeavors.”

“The most influential person in my life is my father…I’m amazed at the amount of energy he displays when it comes to serving his family. It’s almost super-human,” Dawain remarked. “I wanted chrome rims on my car really, really bad. I worked a summer job just to buy some. When I saw I didn’t have enough money to buy any from the store, I found a guy selling his. I bought those rims and brought them home to put on my car, but the lug patter was too wide. I was heartbroken and crushed.”

Atkinson continues, “When my dad got home from his 12-hour shift, I told him about what happened and, when he saw how hurt I was, he told me to go into the house and he would see what he could do. Seven hours later (it was just after midnight) I went out to see what he was doing. I found my father with a circular file filing the lug holds by hand to make my lug pattern fit. When he was done, he came in, went to bed, and was up to go to work on time. The man is amazing. He’s the biggest influence in my life.”

When asked about whether or not he’s celebrating his 100th episode, his reply was a bit jarring. “The reason I don’t number my shows is because I don’t plan on stopping. When I hear that I’m approaching 100, I remember other great podcasts that are in the 500’s and are still going strong. I want to be a reliable source for God’s people for a very long time.”

What makes The B.A.R. so special in the minds of serious-minded servants of Christ, however, is that it stands for truth (no matter how unpopular that may be) while maintaining its laid-back, level-headed disposition.

“I try to create an atmosphere at the B.A.R. that feels like a living room conversation, so it rarely gets intense. The whole purpose, however, of the B.A.R. is to be a resource that points people in the right direction when it comes to finding sound biblical doctrine.”

In God’s timing, a mentor led Dawain to Reformed theology. “I was introduced to podcasts by a mentor who helped me find the Doctrines of Grace. He suggested ‘Renewing Your Mind,’ ‘Grace to You,’ ‘Truth for Life,’ all of which I still listen to daily. Those shows helped my growth tremendously. Prior to adhering to the Doctrines of Grace, I did discernment radio and we would debate and call people out. It was hardcore and very serious.”

It was “Reformed Pubcast,” however, that really opened his eyes to what podcasting could be.

“When I heard the ‘Reformed Pubcast’ I thought, ‘Wow! You can have fun while you podcast?’ I got with my team at the time (Virgil Walker, T. Barlow, and Christi) and told them my vision, and they got on board.”

Dawain’s excited for what the immediate future holds as well. “We’re trying to build a network of podcasts that will provide great content. We’re getting ready to launch a women’s podcast by some great sisters that have always been a part of my team. We’re also in talks with already-established podcasts that also want to join. I’m very excited about what is to come.”

Go check out The B.A.R. on iTunes. More content from Dawain and others can be found at thebarpodcast.com.