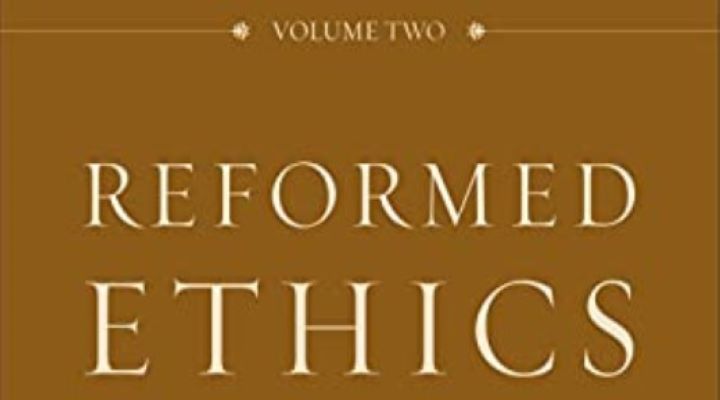 Herman Bavinck (1854-1921) was a minister in the Christian Reformed Church of the Netherlands. In 2008 his massive 4 volume Reformed Dogmatics was published in English for the first time, and more recently, his Christian Worldview and The Wonderful Works of God have been released. In 2019, Baker Academic began publishing Bavinck’s 3 volume Reformed Ethics. 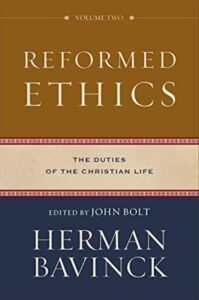 As the editor explains, Bavinck conceived Reformed Ethics as a companion to his Reformed Dogmatics. There is evidence that Bavinck had intended to publish Reformed Ethics, yet for whatever reason, he never did. The work began as a series of lectures that Bavinck gave in Kampen from 1883 to 1902 but languished as a 1,100 manuscript after his death in 1921. That is, until 2008 when the manuscript was providentially rediscovered. Baker Academic’s printing of Volume 1 (reviewed here) consists of what were the original “Books” I: Humanity Before Conversion and II: Converted Humanity. Volume 2, under review now, contains Book III: Humanity After Conversion, and Volume 3 will complete the series with Book IV.

This volume begins with Bavinck’s examination of duties, precepts, counsels, and adiaphora in the volume’s first chapter (Chp. 13; 1-60); followed by a look at the collision and classification of duties (Chp. 14; 61-115). From there, the volume is composed of three major parts, addressing our duties toward God, ourselves, and our neighbor. A standard Bibliography and Scripture, Name, and Subject Indices are included (467-522). As with Volume 1, readers should be aware that some Hebrew, Greek, and Dutch terms are left untranslated. I mention all this in the interest of full disclosure and hope it does not scare anyone away. As we will see, Bavinck asks vital questions and gives incredibly careful consideration to how God’s Word informs the Christian life.

What are the Christian’s duties before God in relation to Him and our fellow image-bearers? What relevance do the Ten Commandments hold for us today? Bavinck’s Reformed Ethics – Vol 2 is essentially his answer to these questions along with his exposition of the Decalogue (ix). I strongly recommend that readers begin with editor John Bolt’s helpful preface where he explains the background to Bavinck’s concerns and methods (ix-xvii). Bavinck rejected what he saw as a false dilemma between Christ and the Law when considering ethics (x-xi). Christian duty is grounded in a “trinitarian, covenantal framework” that cannot be understood if we simply stop at the historical Jesus (xi-xiv). A Jesus who was just a nice guy who said some nice things about being nice to people does not necessarily obligate anyone to obey him. As Bolt succinctly puts it, “Our dutiful response of law-full obedience is an expression of gratitude and praise for who God is and for what he has done (xiv).”

Moving into RE Vol 2’s first chapter (“Chapter 13”), Bavinck writes, “The moral law is for everyone, but each individual believer is uniquely called in different circumstances to use his or her gifts and fulfill their vocation before God (2).” Bavinck was careful to distinguish between the obligatory and the optional. There are “duties”, “precepts and counsels”, and “adiaphora” or “indifferent things” as per Romans 14. Ultimately though, “Ethics … is concerned with ‘ought’ rather than ‘may’ (3).” The author cites the Stoic distinction between absolute duties in pursuit of absolute good vs. relative duties where the desirable is in view (4).

Later Protestantism recognized the law’s abiding significance to regenerate believers. Bavinck seemed to affirm Calvin’s well-known 3 uses or functions of the law as theological/ elenctic/ pedagogic, “political” in the sense of restraining sin, and normative/ didactic or “guiding Christian conduct (4-5).” In the Reformed tradition, the curse of the law has been abolished in the life of the believer but not the law itself (5). Christ himself did not come to abolish the law, but to fulfill it (see Matthew 5:17 and Luke 16:17). Under the heading of duty and law in Scripture, Bavinck concludes “… what is itself spiritual-ethical (the moral law) already in the Old Testament is and remains eternal (13).” He later returns to this theme, stating emphatically “Protestants maintain the absolute validity of the moral law for all people and for all time (51).”

What are we to make of the “permissible” areas of the Christian life? What qualifies as “indifferent matters” or adiaphora? Or as Bavinck efficiently puts it, when does an action or behavior become a “may” rather than an “ought?” I have to admit, this was an area where it was difficult for me to pin down Bavinck’s personal opinions. He cites several other theologians and philosophers including Scotus, Rothe, Schleiermacher, and others and it was not always clear to me where they ended and Bavinck began.

Citing Wendt, Bavinck writes, “The permissible … lies outside the moral duties that exist for us in society. But the permissible may not conflict with those moral duties that exist for us in society (59).” Bavinck seems to conclude that any action, even those that appear innocuous like wearing a hat, going for a walk, or stroking one’s beard, must all be done in accordance with God’s law (60). Even our treatment of animals is governed by God. While animals may not have “rights” per se, we are duty-bound to sympathize with their suffering and recognize them as gifts from God (113).

When it comes to the duties of the Christian life, Bavinck classified them into 4 basic categories (114). There are duties toward God, duties towards ourselves, duties toward our neighbor, and those “special duties” that teach us how and when to perform “general duties.” All duties are to be performed with the Kingdom of God in view as our ultimate goal.

Regarding duties toward God, Bavinck discussed prohibitions on idolatry, the duty to honor God’s name, and keeping the Sabbath holy (119-274). Our duties toward ourselves begin with the care of one’s soul and body, including food and clothing. I appreciated that Bavinck also explored the Christian’s duty to himself to nurture and exercise the intellect (406-409.) He rightly said that the life of the mind begins with a love for truth. Bavinck cautioned against both the “pedant” who parrots true ideas but only in the abstract, as well as the “genius” who rejects every maxim, including morality, eventually becoming a law unto himself (408-409).

As committed to the intellect as he was, Bavinck did not fail to address the heart. He recognized the responsibility to “cultivate” feelings (409-412). We should cultivate, not indulge our feelings because they cannot be left unchecked. As he puts it, “(Feelings) carry us away either to insensitivity or to hypersensitivity, emotionalism, sentimentality. The passions as such are not sinful, so they need not be eradicated (as in Stoicism), but what is wrong is their undisciplined disorder (409).”

The final section of this volume addresses duties toward our neighbor (417-466). Bavinck begins by allowing no room for mistreatment of one’s neighbor when he writes, “And our neighbor is everyone, no matter who and what they are, who needs our help; and we are their neighbor without any regard to their race, nation, or religion, because they are human, because they bear God’s image (417).”

Love for neighbor even extends to the dead. The Christian is called to treat the dead with honor and sensitivity, but not veneration or ancestor worship (427). Bavinck is thorough in his discussion of cremation of the dead, charitably offering arguments for and against the practice, and seeming to land in opposition to it (430-435). I will end with Bavinck’s thoughts on love towards those in distress (444-446). He rightly grounds the Christian’s call to mercy through acts of benevolence and hospitality as “a continuation of Christ as the compassionate High Priest (446).”

Reformed Ethics – Vol. 2 is another treasure trove of Herman Bavinck’s thinking on mankind’s duty before God, himself, and his neighbor. Space does not permit me to get into every topic that Bavinck covers. For example, the volume’s section on “The Law and Christian Liberty” includes a fascinating discussion on nomism and antinomianism (13-20). Some of Bavinck’s observations could have been written 5 minutes ago, including his thoughts on the moral relativism of some within the artistic and political classes. I look forward to seeing this series completed soon in the third and final volume. Highly Recommended.