Biographical Sketch of the Editor

Dale W. Smith holds a PhD from the University of Missouri Kansas City. He has served as a pastor for over 20 years. 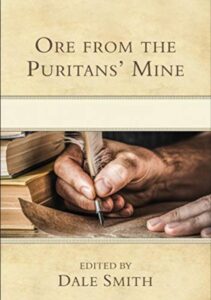 In the past half century, the evangelical world has seen renewed interest and exposure to a group of 16th and 17th Century Christians who became known as the Puritans. Known for their piety and theological conviction, they eventually became known more as dour, legalistic, kill-joys. Thankfully, the recent resurgence of Puritan writings has helped to set the record straight on how warm and edifying the Puritans could actually be.

In his forward to the volume, Joel R. Beeke (Puritan Reformed Theological Seminary) explains the appeal and benefits of reading the Puritans. He writes, “The Puritans are masters at discipling God’s children into spiritual maturity and adulthood (x).” As always, Beeke is careful to recognize the Puritans’ weaknesses and blind spots (ix).

In Ore From the Puritans’ Mine, the reader encounters a kind of sampler platter of Puritanism, similar to what Charles Spurgeon and others have done. This volume is unique in that Smith has also included references to the original sources so that readers can look them up for greater context and further reading. He explains that the book originally came about first through his own devotional reading of the Puritans, then as a help to his congregants, and finally as a thorough resource on the Puritans (xv-xvi).

One of the unavoidable shortcomings to a book like this is that not every topic or author can be covered equally. I can report that this is the case with Ore From the Puritans’ Mine. For example, there are over 70 quotes covering variations on the theme of “Affliction” (9-23). By contrast, I found only 7 entries on “Adoption” (5-6), which was disappointing since Dr. Beeke himself has shown that the Puritans have been an untapped resource for writings on the doctrine. To be clear, some imbalance is unavoidable in a book like this and does not detract from its overall usefulness.

Perhaps one of the most powerful quotes in this book is found in the entries for “Grace.” In John Flavel’s, Fountain of Life, he writes “Think not that because Christ hath done so much for you, you may sit still, much less indulge yourselves in sin, because Christ offered up such an excellent sacrifice for the expiation of it. No, though Christ came to be a curse, He did not come to be a cloak for your sins (223).”

Dale W. Smith has obviously put a remarkable amount of work into compiling the best of Puritan writings in Ore From the Puritans’ Mine. The subject matter, as well as the choice of cover art, makes this volume a great compliment to the publisher’s previous books, A Puritan Theology and Meet the Puritans. This book will serve effectively as a scholarly resource, as personal devotional reading, or as material for family worship. Highly recommended.

By God’s grace, Chuck Ivey grew up in a Christian home and came to know Jesus Christ as his Lord and Savior at a young age. He has been married to his wife Ashley for 20 years. They have seven high energy children by adoption (yes seven), also by God’s grace. Chuck works full time in local law enforcement as an investigator and chaplain. He serves as a deacon and teacher at Beech Haven Baptist Church in Athens, GA. Chuck is a graduate of Midwestern Baptist Theological Seminary where he earned a Masters of Theological Studies. Coffee and books are involved. You can follow him on Twitter @3378Ivey

I suppose I should be thankful for God’s use of Beth Moore. Normally, “thankful for Beth Moore” would cause me great fits of nausea. The woman is, at best, woefully disobedient, and at worst a heretic. She and her all-to-willing-to-cause-trouble quasi-feminist cohorts bring great damage to the church. Nonetheless, just as God used such spiritual […]

Textual criticism is the art and science of finding the original wording of a given biblical text when conflicts between manuscripts (“variants”) arise. Much has been written concerning King James Onlyism and its variations’ impact upon unity in the local church, and plenty of books do well to explain the controversy from a sound, overall […]

Leo’s Monster is a book for children aged about 4-7 years old. The setting is “the country” where a city mouse (Leo) visits his friend Zoe. Leo ventures out without Zoe and encounters what he can only assume is some sort of monster!

Once upon a tyme, in the cold, dark for’sts of New York and Quebec, a pair of well-respected Reformed theologians did found a Coalition to advocate for and restore trust in the biblical Gospel. ‘Twas to be “a fellowshipe of evangelical churches in the Reformed tradition deeply committed to renewing our faith in the gospel […]

In my last post, I went through some myths and truth about foster care and focused a bit on interpersonal issues. This time, I want to look at the big picture and talk a good bit about adoption. Throughout this series, I’ve tried to emphasize the great need for the church to be involved in […]

*The following is an adapted excerpt from Before the Throne: Reflections on God’s Holiness by Allen S. Nelson IV (2019).  No Room for Meh When it comes to responding to the holiness of God we have two options (See Isaiah 6:5 and Revelation 4:8). Woe is me or worthy are You. Do you know what […]