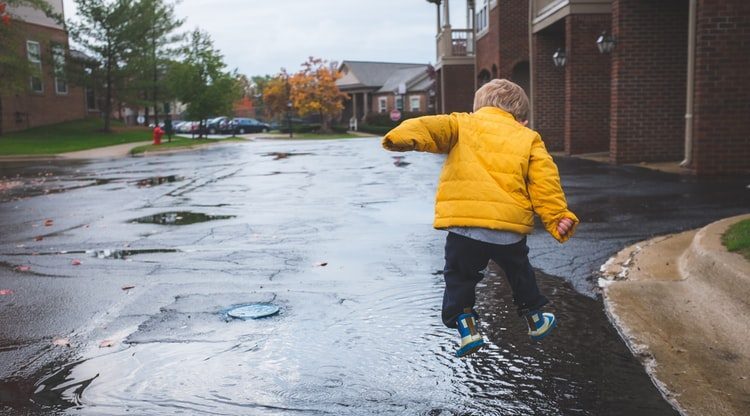 On Dirty Faces and Pop-Tart Guns We noticed the strangest thing when our middle son was 6 years old playing baseball. Now, little boys playing baseball are always going to get dirty, but there seemed to be something exceptionally dirty about our son.

My wife observed it first. “I think Caleb is rubbing dirt on his face.” “No way! He’s just a little dirty,” was my response. Except, I soon noticed she was right! He was rubbing dirt on his face. Every time he took the field for defense he set his glove down and stooped over immersing both hands in the dirt. Then, double fisted he would take the dirt and smear it all over his face.

Back to His Roots?

While that’s a little strange, what’s not strange is that little boys like to play in the dirt. It’s like you can’t keep them from it and the more you try the more attracted to it they seem to be! There is almost a magnetic pull between a little boy and a pile of dirt. They want to kick it. They want to put their toy cars in it. They want to throw it at their sister, and sometimes, they might even want to eat it.

The Bible says in Genesis 2 that “then the LORD God formed the man of dust from the ground and breathed into his nostrils the breath of life, and the man became a living creature” (Genesis 2:7).

Now, I don’t desire to build a theology of dust in today’s post, but I conjecture that perhaps there’s a connection between boys loving dirt, and Adam being made from dust. I’ll draw some more conclusions at the end of this post.

In 2013, 7-year-old Josh Welch nibbled his pop tart into the shape of a gun. Turns out, his elementary school felt this was threatening and suspended him over it (read more here). I don’t know the kid and I don’t know the situation, but two things immediately come to my mind on that: 1.) Seems sort of funny and creative and 2.) Doesn’t it seem almost natural for little boys to like to play with “fighting” toys?

In Genesis 2:15 God places Adam in the garden in Eden to work it and “keep it.” That word for keep has the connotation of “guard” (it’s the same word used in Genesis 3:24). For example, check out the book of Numbers and how Aaron and his sons were to guard the tabernacle (see Numbers 3:8, 10 for example). The word for “guard” is usually the same Hebrew word translated “keep” in Genesis 2:15.

What I’m getting at is that Adam wasn’t just charged by God to grow tomatoes in Eden. He was also to “guard” the Garden and once we get to Genesis 3 we see why.

So, what I’m getting at here is that perhaps little boys like to fight, and play with swords, and play army games not because they’ve yet to be properly indoctrinated by leftist thinking, but because there is something within them that naturally is inclined to “guarding”.

A Shadow of Eden

So, where am I getting at with all of this? Well, I’m putting forth a Biblical case for the fact that little boys and little girls are different, and this is a good thing. When we see a boy with a dirty face and toy sword in his hand we should see a shadow of Eden. We should smile at God’s goodness to us in giving us little boys—while not being afraid to discipline said boy for hitting his sister with said sword. God got His hands dirty so to speak when He stooped to form Adam from the dust of the ground. And He put within Adam a natural desire to guard his home and family. Sadly, Adam let this desire be overruled by the serpent’s cunning and fell into sin.

But don’t let this make us forget that little boys continue to born in the likeness of Adam (Genesis 5:3). And while the Imago Dei is greatly marred because of the Fall of Adam, we still see a shadow of Eden when little boys like to be little boys. Hopefully, this positively impacts our parenting strategy.

Glory to God for dirty faces and pop-tart guns.

The morning I published this post I found an old picture of my 6th-grade son when he was in Kindergarten. Oh my! Let us cherish the time we have with dirty faces and pop-tarts because those days go by so fast.