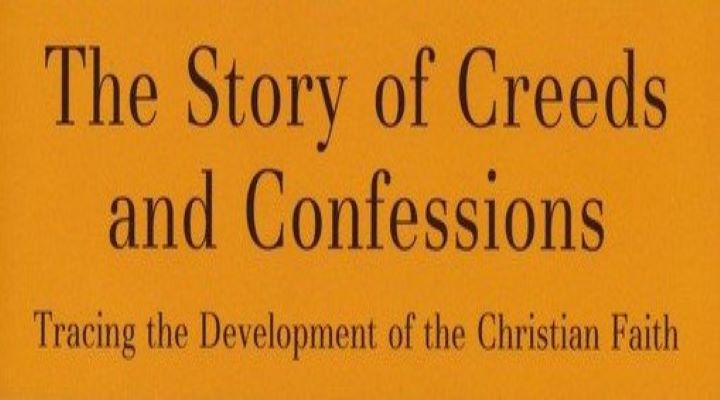 Book Review — The Story of Creeds and Confessions: Tracing the Development of the Christian Faith

Fairbairn, Donald and Ryan M. Reeves, The Story of Creeds and Confessions: Tracing the Development of the Christian Faith. Grand Rapids: Baker, 2019. 396 pp. $34.99 His other works include Life in the Trinity: An Introduction to Theology with the Help of the Church Fathers and Eastern Orthodoxy Through Western Eyes. Ryan M. Reeves holds a Ph.D. from the University of Cambridge. He taught there as well as at Gordon-Conwell Theological Seminary and Reformed Theological Seminary, Orlando. He also authored English Evangelicals and Tudor Obedience c. 1527-1570 and co-authored Know How We Got Our Bible.

Historical theology deals with the question of what the church has believed and taught in various time periods. Any examination of church history is going to have to deal with the many creeds and confessions that have been formed and debated over. The authors of this book have given us a handy one stop resource on the creeds and confessions. As the title suggests, the story of the historic creeds and confessions is really the story of the Christian faith. The authors collaborated on this book but also make clear that the periods of the first century up to time of the East-West Schism were mostly the work of Fairbairn and medieval to modern eras were covered by Reeves.

In the Introduction, the authors explain that they see the Christian faith as beginning primarily with a name. They make it clear that they intend to practice scholarship as believing Christians. They affirm the importance of ethics, commandments, and doctrine, but argue that it all begins with the name of the Lord Christ Jesus. The authors also include a helpful analogy in defense of creeds and confessions of faith in relation to Scripture. The Bible without guidance from the historic creeds and confessions is like being asked to explain the English language based solely on the complete works of Shakespeare (4). The creeds and confessions do not replace Scripture, they help us explain the Christian faith the same way that an English Grammar textbook or summary can help us understand the brilliance of Shakespeare’s writing.

The book is made up of 18 total chapters, spread out over 5 parts. In Part 1, the authors cover the period of the early church from 100-500 A.D. They wisely begin with the biblical basis for creeds and confessions and the desire for standardized formulation of doctrine before moving on to the Nicene, Chalcedonian, Apostles, Athanasian and Creeds. They include the convenient, but probably apocryphal story by Rufinas of the Apostles Creed originating with the apostles themselves (19-20). The full story comes later in Chapter 6, where Fairbairn and Reeves explain how “The Old Roman Creed” of the second century was revised and eventually became what we now know as “The Apostles Creed” ca. 400 A.D. (109-125). The church saw the need to clarify earlier statements, for example by stating that Jesus was not only God’s Son, but “Christ Jesus is (God the Father’s) only Son, our Lord.” (110).

Part 2 then transitions to “Exploring Creedal Theology”, starting with the sixth century. By that time the Nicene Creed has largely been accepted but the Chalcedonian Creed was hotly debated, requiring ongoing clarification on particular statements. For example, there were some who seemed to be attempting to split the person of Christ into an eternal Logos and a mortal man named Jesus (145). Possible tampering with Christology also begged the question of whether the suffering of Christ meant “suffering” on the part of God’s very nature.

The distinctives of the Western Church are explored, followed by the impasse that led to the great schism of the churches of the East and West. The authors explain how the division involved politics but also very real theological issues touching on the nature of the Trinity in what became known as the Filioque Debates (182-183). The Western Church confessed that the Spirit proceeds from the Father and Son, while the East insisted that the Spirit proceeds from the Father only.

The authors devote Part 3 to the move from “creeds” to “confessions” in the West during the leadup and coming of the Middle Ages, circa 900-1500 A.D. With the rise of scholasticism, theologians followed a “dialectical” method, laying out opposing views and their pros and cons (196-202). The famous Summa Theologiae by Thomas Aquinas was probably the most well-known example of this technique. If you have ever heard Voddie Baucham Jr. dialoguing with himself as he preaches, you will get the idea.

The era of the Reformation and Confessionalism is explored in Part 4. Fairbairn and Reeves helpfully explain the personalities and debates which sparked the Reformation before presenting some of the Confessions which came out of them. The choice by the authors to put the beginning of the “modern” era of confessions at 1650 A.D. was an interesting one. Fairbairn and Reeves see 3 basic categories of protestant confessions (249). There are Confessions of Orthodoxy, Community, and Controversy. Pedobaptists and Credobaptists should be pleased to see both traditions fairly represented by the authors. One of the nice discoveries for me in this section was the lesser-known Schmalkald Articles which include a strong affirmation of justification by faith alone (279).

The final section, Part V “Confessions in the Modern World (1650-Present)” gives us what the authors call a “new grammar of modern confessions”. In this section, the authors delve into the much beloved and debated Westminster and Second London Confessions of Faith. As a small aside, the authors make what appear to be some confusing statements here. They assert that the text of the First London Confession of 1644 was based in part on portions of the Westminster Confession (363-364), yet earlier they say that the framers of the Westminster did not issue the Directory of Public Worship (as a replacement of the Book of Common Prayer) until 1645 and they did not complete the WCF until 1646 (354-355). I may have missed the explanation for this, but the timeline did not seem to line up.

John Wesley’s contributions to the faith come up next. He revised the Thirty-Nine Articles of the Church of England to state that “the (United) States are a sovereign and independent nation.” Agree or disagree with him, but the authors show how, given the context of the Revolutionary War, Wesley’s reluctance to imply a distinctively British influence on the church was understandable (366).

A brief Conclusion closes out the book as the authors return to the theme of Christianity beginning with a name. Yes, doctrine is important but the faith starts with the name of Christ (385). The creeds and confessions help us describe the faith we place in the person and work of Christ. The authors write that the many debates and even bloodshed that came about in church history have been tragic and often sinful, and yet they serve to demonstrate that Christians saw the need to say something about God, even when they disagreed on how to say it (386).

How far should professing Christians go in pursuit of unity? When and how should we disagree with each other? Are there ever circumstances when we should break fellowship? The thorough look into church history in The Story of Creeds and Confessions serves as a helpful reminder to seek and speak the truth humbly and in love. None of us lives in a vacuum so we should be charitable with our opponents while still holding to truth. I highly recommend this book and expect that it will serve as a valuable resource.