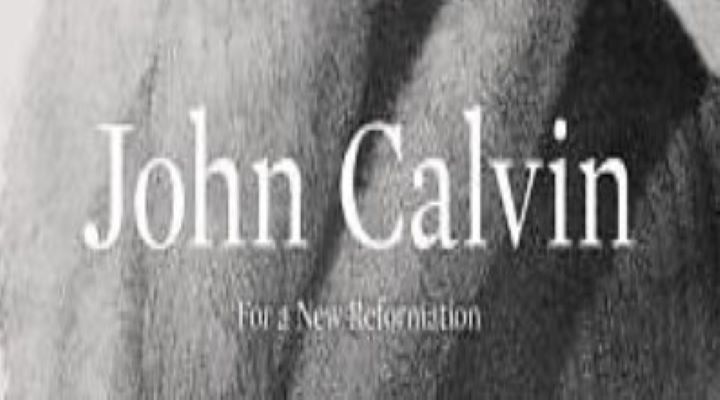 Derek W.H. Thomas serves as Chancellor’s Professor of Systematic and Pastoral Theology at Reformed Theological Seminary and a teaching fellow at Ligonier Ministries. He is senior minister at First Presbyterian Church in Columbia, S.C. His other books include Calvin’s Teaching on Job and How the Gospel Brings Us All the Way Home.

John W. Tweeddale is academic dean and professor of theology at Reformation Bible College. He also serves as a teaching elder with the Presbyterian Church in America. He is the author of John Owens and Hebrews: The Foundation of Biblical Interpretation and was an assistant editor on the Reformation Study Bible.

Love him or hate him, John Calvin remains “The Theologian” who is often dismissed, pigeonholed, or lionized without actually being read. In John Calvin: For a New Reformation, editors Derek Thomas and John Tweedale ask us to reconsider Calvin through a series of essays. The contributors make up a roster of our best modern theologians.

The book is made up of 20 chapters divided into 2 parts. Part 1 focuses on Calvin’s life and work, while Part 2 unpacks his teaching. There is also a wonderful afterward by the late teacher-theologian R.C. Sproul, in one of his last published writings (575-578). The afterward is followed by an Appendix by Tweeddale which provides a helpful guide to reading Calvin and his interpreters (579-584). The book concludes with standard General and Scripture indices (589-608).

In the opening chapter, author Michael A.G. Haykin fleshes out Calvin’s early life (21-38). He notes that Calvin avoided writing or talking about himself. There were rare exceptions like the preface to his commentary on the Psalter (21-22). In one particularly transparent example, Calvin shared “My father intended me as a young boy for theology (24).” He attended the notoriously miserable College de Montaigu, once described by Erasmus as “filthy, bleak, inhospitable, reeking with the foulest smells (and) clotted with dirt.” Some speculation is probably appropriate about the influence this kind college life had on the young Calvin.

God was merciful to grant John Calvin other influences and experiences in his youth, most importantly his conversion. Regardless of exactly how or when he came to faith, Calvin recognized his own inability apart from divine grace. As he would later say “It is not within our power to convert ourselves from our evil life, unless God changes us and cleanses us by his Holy Spirit (32).”

As the saying goes, if you want to make God laugh, have a plan. Calvin’s plans to live a quiet reclusive life of study and writing were famously interrupted by his friend Guillaume Farel. Calvin intended to pass through Geneva but Farel declared that if he did not stay and minister to the people there he would be under God’s judgment (40). Calvin could not ignore the warning and became instrumental in Genevan church life.

Besides the doctrine of predestination, Calvin is perhaps best known for his monumental Institutes of the Christian Religion. The Institutes went through five editions beginning with the first in 1535. Derek Thomas dedicates a chapter to its development during the period from 1536 to 1559 (199-222). He notes that the spread of Calvin’s magnum opus was due in part to the relatively new invention of the printing press with movable type and the deliberate choice to produce a French translation in 1542. J.I. Packer considered Calvin’s Institutes “one of the wonders of the literary world (200).”

The authority of Scripture remained the grounding doctrine of John Calvin’s theology. Scott Oliphint, in his contribution to this book, argues that Calvin saw the self-attesting nature of Scripture’s authority as primary. It is only after presupposing the divine authority of the Bible that evidences of its divinity can serve as a means to read the Bible for what it is (248).

Paul Wells takes on the person and work of Christ in Calvin’s theology in Chapter 12 (335-368). He points out that Calvin’s critics and admirers have often overemphasized predestination as his main concern. Wells corrects this misunderstanding with a thorough demonstration of how much Christology informed Calvin’s work. He writes, “(Calvin) presents, both in the Institutes and his commentaries, a theological perspective that hinges on mediation and Christ as mediator, not only in the incarnation but also with a much broader perspective (336).”

In John Calvin: For a New Reformation, the editors and authors make a convincing case for readers to take a fresh look at the famous reformer. The late R.C. Sproul declared that Calvin “stands alone in church history as the master of systematizing biblical truth with doctrine (575).” He laments the ignorance of many in the church that has cost them an honest appreciation for how God used Calvin (577). This book is scholarly and well documented without being overly detailed. It is the type of work that could easily be cited as a source in an academic paper or read just for pleasure. Highly recommended.