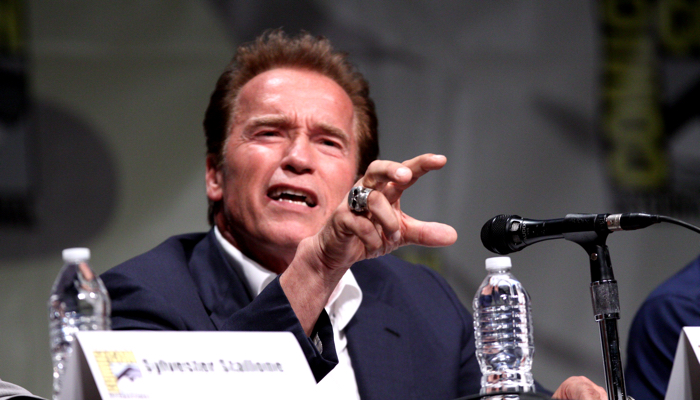 The Lord Jesus Christ blessed us with pleasant weather and friendly crowds at the 2018 Arnold Classic Outreach in Columbus, OH. The Arnold Classic is an international exposition featuring athletes from a number of different sports including, bodybuilding, weightlifting, martial arts, gymnastics, and more. Vendors of all types of nutrition supplements to exercise gear or t-shirts flock from all over to get their product or message in front of the international crowd of up to 175,000 people who attend!

From an evangelical perspective, it’s a gold mine of opportunity to get the gospel to every nation, from all tribes and peoples and languages (Rev 7:9). I have been bringing the gospel to the “Arnold” since 2010. This year there were several remarkable stories I’ll share with you. Before I do that I want to acknowledge the folks who served alongside me, preaching, handing out tracts, worshiping God through singing and speaking the gospel to people. And I know all of this was only possible through the prayers of dear saints and the Spirit of Jesus Christ. One of the neatest things about preaching the gospel at the same location for an annual event is that people often remember seeing you from the year before or from another event. After I preached the gospel a man came up to me and asked me if I was the guy preaching last year, too. I told him I’ve been coming for several year. His name was Johnny B and he was from Orville, OH. He was very grateful for the preaching as he said we preached “the truth!” It is very common for people to remember you from even different venues.

It was also very encouraging when a lady from Florida came up to me with her son and said, “Thank you for what you all are doing out here.” Preaching on the street has probably never really been considered in season, and our biggest detractors are often fellow Christians. So that type of encouragement is a big deal to us. It cheers our hearts and provokes us to continue, even in the midst of adversity.

Although we do not battle with flesh and blood (Eph 6:12), adversity while on the street often comes in the form of literal flesh-and-blood creatures trying to bring discouragement, whether intentionally or not. This outreach was no different, and preparation for such encounters is key to handling them in a godly way. A gentle answer turns away wrath (Prov 15:1), but engaging with someone who isn’t there to advance the cause of the gospel can be counterproductive to the mission. So we must have discernment and help from the Holy Spirit to properly react to various situations! Here you can see how the crowds would funnel toward the entrance to the Convention Center. The crowds enter single file through a door opening to High Street providing us with a temporarily “captive audience.”

When we first arrived, we were greeted by some friendly Seventh Day Adventists (this is a non Christian cult which uses a lot of protestant language in their doctrine). As my team was engaged, it was hard not to appreciate what he was saying to us. He was talking about giving away Bibles and how important it was that we are allowed to pray in public. Not wanting the young people among us deceived, I tried to clearly but in a friendly way affirm that we are not together with this unorthodox group. The man protested, but when I brought up what I knew to be some of their pet doctrines, (Sunday worship is a sin, annihilationism), he quickly showed his faith was in his religion and not Jesus Christ. I wanted to separate from him and his group quickly and gracefully lest he be deceived into thinking we accepted him as a brother or his influence would affect my group.

Local church membership is God's primary provision to His dear children to protect them from false doctrine and deception. Click To Tweet

The final bit of potential discouragement came in the form of a man who I have seen at the Arnold for several years. He is a nomadic (that means church-less) open air preacher whose message of “accept Jesus and your life will get better” I have hated since I first heard it broadcast from his megaphone. I was friendly to him, though, and started the conversation treating him like a brother in Christ. When he started to tell me how he “used to think Joel Osteen, Joyce Meyer and Creflo $” were a problem, but that now he “knew they were just God’s children who God was blessing,” I could not keep my mouth shut. I told him it was concerning that he would look up to known heretics. He was very offended immediately and started to show me a Scripture passage to defend the prosperity gospel message.

It ended with me asking him a question which exposed his folly so egregiously that he began to cuss at me and look very angry. I asked him why he was angry with me for telling him the truth (Gal 4:16) before he admonished me for being “too Baptist” and let me know he’d never follow a man like I was. Although we hope for more favorable results to encounters, I can’t say I was sad that he was removing himself from the area where we were trying to work. This is also why one of the rules for ministering alongside me is membership in a local church. Local church membership is God’s primary provision to His dear children to protect them from false doctrine and deception.

During my first open air “sermon” a man walked by me wagging his head (Matthew 27:39) and looking so menacing that it actually made me a bit scared. He eventually returned and stood and listened to me for a little while. When I stepped down from preaching, he came to me to tell me he had hated the preaching at first but that something had changed and he had decided it was a good thing what we were doing. He said we seemed genuine, which was refreshing. We talked for a while and he told me about his life and I explained the gospel and gave him a Bible. Moments like this are super exciting. Will you please pray for this man, Jim, today?

As always, I praise God and thank Him for all of you who have prayed, given or participated in some way toward fulfilling the Great Commission in my home state of Ohio. I hope you will be spurred on to good works in your own area by this report.