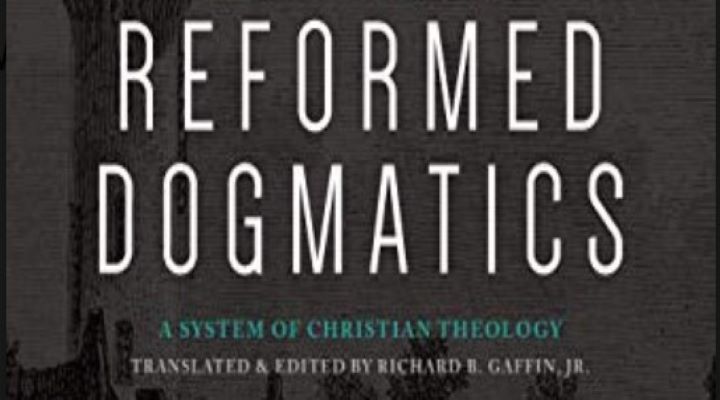 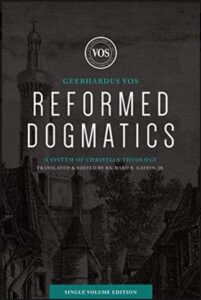 Geerhardus Vos (1862–1949) was a Dutch-American theologian who served as the first chair of biblical theology at Princeton in 1892. Several notable Reformed theologians including J. Gresham Machen and Ned Stonehouse were among his students at Princeton. His writings helped to legitimize the discipline of biblical theology and he remains one of the giants of the Reformed tradition. He was born into the family of a Dutch Reformed Church minister and later became part of the Presbyterian Church of America.

Though well known for his Biblical Theology, Geerhardus Vos also produced one of the most significant systematic theologies with his Reformed Dogmatics. The work came out of the author’s time while teaching at what eventually became Calvin Theological Seminary (7). His Dogmatics was first handwritten in 1896 and printed in 1910, but remained available only in Dutch. Just over 100 years later, Richard Gaffin Jr. completed the English translation and editing of the Dogmatics. In 2013 Lexham Press released the magisterial work in a five-volume set. The publisher has now released the work in a single volume while retaining all of the content from the five-volume edition. Considering there are more than 1200 pages included, the book is relatively small at less than 2 inches thick. Lexham maintained the size by using very thin paper, similar to what you would find in a pew Bible.

The first four volumes of Reformed Dogmatics cover Theology Proper, Anthropology, Christology, and Soteriology. The fifth and final volume addresses Ecclesiology, The Means of Grace, and Eschatology. The chapters in each volume are made up of a series of questions and answers. After each concise, one-sentence theological question, Vos provides his answers. His answers range from a brief paragraph to more lengthy multi-point answers that span several pages. The book concludes with Indices of Questions addressed, Subjects and Authors, and Scripture (1155-1274). As with any expansive book like this, I hope to give readers a sampling of what they can expect in some of the major areas.

Geerhardus Vos held to orthodox teaching that God is “simple, without composition (15).” He wrote that God’s revealed being and attributes should never be separated because that would result in a distinction “between what is essentially divine and what is derivatively divine.” While God’s attributes may be carefully distinguished from each other, such as love and righteousness, His attributes always operate in harmony with one another. Put another way, God’s love does not negate or create tension for Him in relation to His righteous judgement.

Every era of theology has its figures who receive so much attention and influence, good or bad, that they cannot be ignored. In Vos’s day, Friedrich Schleiermacher was one of those theologians. Vos was willing to quote Schleiermacher somewhat favorably in some areas (17), while also being unafraid to critique his views in others. For example, Schleiermacher’s doctrine of sin and guilt was “merely subjective” in Vos’s assessment (240). His formulation of Christology created an “abstract, primal deity (coming) to self-consciousness in man (437).” Not only that, but Vos saw Schleiermacher confusing Christ the Mediator’s work of redemption for “reconciliation” instead (527).

I was disappointed to learn that Vos did not dedicate a separate chapter to the doctrine of adoption, but I was pleased with what he does provide. Vos examined adoption in the context of justification, as other theologians have done. He made a distinction between what he saw as the Bible’s teaching of “judicial” adoption and that of “ethical” adoption (765-766). Vos argued that Scripture can refer to one or both types of adoption, depending on the passage. As he saw it, both judicial and ethical adoption appear in Galatians 3:26-27. John’s Gospel presents the legal or judicial variety of adoption in John 1:12, while his first epistle is talking about ethical concerns and sanctification at 1 John 3:9-10.

Vos concluded—regarding judicial adoption—that believers can be confident that God’s justice was satisfied by God’s grace (766). They are now free to serve and obey God out of love and not obligation. Next, judicial adoption is God’s declaration that his adopted children have an inheritance as coheirs with Christ. Finally, Vos saw the truths of adoption as support for the believer’s assurance of salvation. While believers remain under the moral law, the presence of sin does not reverse their justified state. As Vos put it, “A son can certainly sin and transgress against his father, but he does not therefore cease to be a son (767).”

Geerhardus Vos’s Reformed Dogmatics is a must-have for aspiring theologians. While this book was not an easy read or devotional in tone, Vos demonstrated faithful precision and he wisely avoided novelty or innovation for its own sake. The new Lexham Press single-volume edition of this important work is a great option for anyone reluctant to pay for the previous five-volume set. Highly recommended.