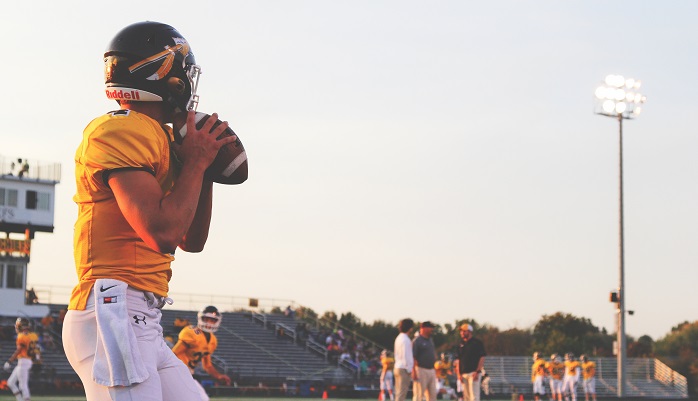 On the 25th of June, 2018, the Lord Jesus Christ granted me an opportunity to preach the Word to a college football team. There’s a school in Ohio that is not a Christian University, but, due to some Christian faculty in the athletic department, I was asked to bring a message before a summer workout through the FCA.

So there I was, standing in the locker room with 60 or 70 young men waiting to go to football practice. I was told that these young men are evangelized all the time, so “bring more than just a gospel message.”

The schedule was for me to give them a message, they practice, then we feed them dinner. I brought my son Wesley with me. At 5 pm the football team was all gathered in the locker room. I was given a short introduction, “Michael is a street preacher, and he’s here to share a message with you,” and was handed the floor. There are a few different arenas where you may end up preaching, and they all have different dynamics that affect the style of preaching you may choose.

In a traditional church preaching situation, you expect (some amount of) eager to learn Christian folks, Bibles in their laps, ready to follow along and take notes 1. At the very least, it’s not a crazy expectation that folks will have a Bible and can be told to “turn to such and such book and chapter…”

There are other settings as well, like a church gathering where someone brings a message, but people may not have their Bibles with them as the teaching isn’t the primary reason for the get-together, such as a picnic or camping trip with the church body. In a situation like this, it is more important for the preacher to explain the text and read the text in a memorable way, as people will not be able to easily refer back to a section during the teaching.

The setting I found myself in was one where I doubted most of the people were really very interested in what I had to say. They had 15 minutes where they were expected to sit respectfully, and then it would be time to practice football. My guess was that no one would have a Bible to turn the pages of, and that very few of the men listening would have much biblical understanding. I thought, “I need to make sure I leave them with a memorable main point. Something that if they forget 99% of what I actually said, they’d have an idea to cling to.”

Additionally, I knew that having notes would only cost me time as I looked at them, and it would cost me valuable eye contact with my hearers. So I committed to preaching with nothing but a Bible in hand, trusting the power of the Holy Spirit to anoint the preaching as only He can.

Apart from preaching the gospel, I thought of no better doctrine to leave these men with than an explanation of how trustworthy the scripture is. In my mind, I debated between a few techniques I could use to get their attention: I pondered speaking of various stories of football heroics, Cinderella stories, and stories of folks who overcame all the odds to become champions to use as object lessons.

I couldn’t possibly just preach God’s Word, could I? What about the unbelievers in the room? Would I lose them? You can listen in the player below to hear what I actually did. It is only 15 minutes, and I hope it is edifying for you.

I thought of a few things after I spoke and watched practice.

First, these guys are all really big fish in a small pond. They live in an environment where being good-looking, strong, and youthful is enough of an asset to basically get what you need in life. It occurred to me how much more there is to life than the things that seem to matter while at a university. I don’t mean to belittle their lives. They must grow where they are planted now, but my own university life was brought to mind, and I saw how I had wasted so much time on vain things. Second, I was impressed by what a rare opportunity I had been given. As a street preacher, I rarely get a captive/listening audience. What a treat God had given me that evening. And to be able to bring my son with me was icing on an already good cake. My son was able to hear preaching and sat expectantly waiting to hand out the tracts he had brought.

Finally, I was humbled by the graciousness of the players. Many of them approached me to say thanks for my message. I could tell from the discussions that they were not all Christians who did this. I was greatly impressed that they were bold to come to speak to me and thank me. This is a reflection on their parents and the administration they are under now, in addition to God’s grace to them.

The Cherry on Top of the Icing on the Cake

The ultimate highlight of the night for me was when I ended the night talking with a group of Christians. I was able to listen to them talk about what it is like to be a young person and a Christian on a college campus (I never experienced this, myself). I was able to hear their hearts as they clearly yearned to see their classmates and teammates know Christ.

And I was encouraged by a particular compliment I received about my preaching. Now I don’t share this to brag — you can listen to the message and decide yourself what you think of it. But one of the students told me, “In three years, we’ve never had a speaker like you.”

I told him thanks, then wondering if this was a good thing asked him what was different about my or my message. His reply was honey to my soul. He told me, “You brought the truth. Everything you said you backed it up with scripture. Most people try to come in and dazzle us with football stories.”

This was especially pleasing to my soul because if I am going to be known for preaching, I want the subject of my preaching to be Christ and the foundation to be scripture. And God encouraged me by bringing people in my life that evening that confirmed for me that, to His elect, it is still the Word of God that is their delight.

I would be remiss if I didn’t offer thanksgiving to all of you who prayed for me. This has been the busiest month of our lives and I did not have the kind of time to prepare a message which I would have preferred. For God to be gracious to me by keeping me faithful to Him and His Word is praiseworthy, and I thank you for your petitions on my behalf.

1 Yes, I am aware that not everyone who goes to church on Sunday is an eager-to-learn-Christian. Regardless, we ought to expect Christians to come on Sundays ready to learn.