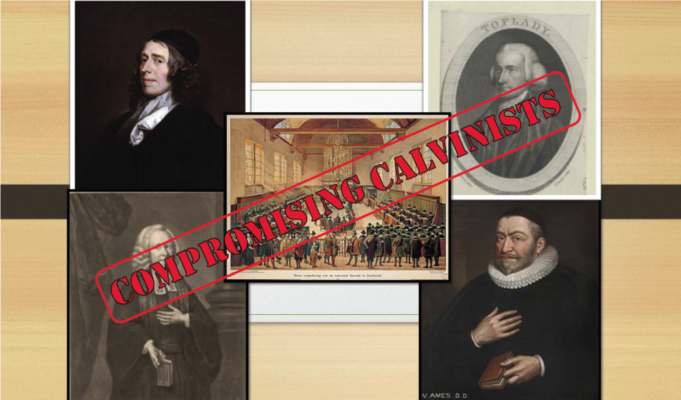 “Compromising Calvinist.” This term has become a fiery dart in the arsenal of some of our Calvinistic brethren. No doubt there are preachers who compromise the truth in many ways. But this term isn’t primarily directed toward social gospel preachers, New Apostolic Reformation sympathizers, or even what some would call “Calminians.” The cross hairs are now sighted toward teachers who hold to a theologically balanced, systematically consistent, and historically affirmed Calvinism. This particular group calls themselves “consistent” Calvinists, or sometimes “high” Calvinists (although not all high Calvinists act the way these do). And the responding labels against them are usually “Hyper-Calvinist” or possibly even “cage-stage” Calvinist. But this group is none of the above.

I am not ignorant to the reality that there will always be those who believe they possess stricter and purer forms of any belief. But what makes this group especially grievous is that they not only appeal to Scripture to affirm some of their imbalanced views, but also Reformed history. But before I go into those particular points, let’s talk about my friend R—.

R— was a man who I used to preach the gospel with. I considered him my friend. My compadre in the work of the ministry. We had sweet fellowship, kindred spirits, and often challenged one another in a way that was edifying, encouraging, and convicting. Then, something changed. Like many others who stray, sometimes a Facebook page, a book, another preacher, or a trial comes along and T-bones a professing Christian into a doctrinal ditch. I hadn’t spoken to my friend in a few years, since he was “off the grid” for a while. But when he reappeared, he had some very choice words for me and my apostate Calvinism. And no matter how much I invited him and his group to discuss their beliefs, I was only met with a berating refusal to cooperate. It was gut wrenching and frustrating to say the least. But parting ways was the best option for peace.

Since that time, R— and those in his camp have gained some ground with Calvinists. They have not only harassed some of my fellow preachers and friends, but they have won some converts too. And, of course, this isn’t anything new. But I only wish to exhort my brethren to consider the following in the hopes of remaining balanced and self-controlled before going off the precipice with these fellows.

So what are my historically affirmed, and systematically scriptural beliefs that caused R—, and some within his group, to label me a compromising (even cowardly) Calvinist? Here are the top 6:

There are more I’m sure. But these were definitely the trigger topics. However, it isn’t so much that we disagreed about these things that grieved me the most. But as I mentioned, it was primarily the fact that they reference prominent, Christian theologians in history to justify their accusations of my supposed Arminianism cloaked in Calvinistic words.

They quote men like John Owen, William Ames, Augustus Toplady and even historical documents like the Canons of Dordt, Westminster Confession of Faith, and Second London Baptist Confession. Moreover, on the flip side, I am damned together with Paul Washer, James White, and even George Whitefield for preaching a “compromised” gospel. And why? Partly because I dare to entertain point 6 above. But mostly because they saw points 1 thru 5 as Arminian compromises (2 and 5 apparently being Lordship Salvation “heresy”). Furthermore, they believed that because the Canons of Dordt and John Owen (and others of our Reformed kindred) condemned Arminianism (however that is defined), as Calvinists, we should too! And If we don’t, we are compromising Calvinists.

Before I address the 6 points of compromise above, let me quickly point out that I agree that there are inconsistent forms within any camp, including Calvinism. I also agree that there are compromises (however that may be defined) that have been made by even some of our favorite theologians. But if our goal is to be consistent, balanced, and systematic with our theology, and to be fair and accurate with Christian history, we would soon find that even the most Calvinistic men in our Reformed history aren’t Calvinistic enough by this group’s standards.

In the next post, we will look at some of the examples proposed by this group in history, which should encourage us to steer away from becoming compromised Calvinists. But, we are going to see if these events/men can stand under the mighty weight of what this group constitutes as “compromise.” Such examples will include the Canons of Dordt, William Ames, Augustus Toplady, George Whitfield, and my favorite, John Owen.