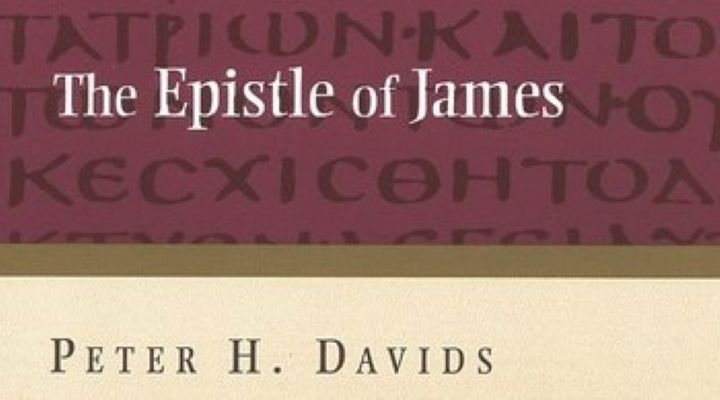 Book Review — NIGTC: The Epistle of James – A Commentary on the Greek Text Any teacher of the Bible (or student for that matter) should be diligent and careful about finding solid resources to better understand and apply Scripture. The NIGTC from Eerdmans continues to serve as one of the best commentary series out there. I previously reviewed G.K. Beale’s massive and highly regarded commentary on Revelation in this series here. Now I have the opportunity to share my thoughts on Peter David’s work on the Letter of James.

An Epistle of Straw?

The Letter of James is important to understanding the whole counsel of God through its encouragement to seek God’s wisdom and maintain a balanced understanding of our justification before him. Martin Luther famously struggled with how to understand James. Luther once called James “a right strawy epistle” and that if he could, he would “throw old Jimmy into the fire.” Of course, Luther eventually accepted James’s letter as inspired scripture, but his rash comments are still repeated today.

Davids begins by explaining that the impetus for this commentary was encouragement from other scholars that there was still important research to be done on the Letter of James (ix). Redaction criticism was festering doubts about the reliability of the gospels and started to spread to the New Testament (NT) letters as well. Davids wanted to compile and present the work of other commentators and scholars before him, but he also had no desire to simply repeat or replace what they had done. Unfortunately, Davids himself chose to use “traditional-critical and (to the extent possible) redaction-critical methodology” to determine what we can know about the origins of The Letter of James (1).

I was disappointed to see that in the introduction and commentary itself, Davids makes several references to the much-disputed “Q Source” as if its existence were a settled issue (48, 53, 56, 67, 73). The nature and existence of Q continues to be debated among scholars. That being said, I think Davids was right to look at the date and authorship of The Epistle of James as one issue instead of separately (2). In the author’s estimation, the letter developed as a “two stage work.”

After considering the arguments for exactly which “James” wrote the letter, Davids concludes that James was not a legalist as some have claimed. Instead, James was a leader in the early church who balanced opposing the Judaizers of his day as well as Gentiles who dismissed any and all Jewish practices (19n73; cf. Acts 15:13-21). Davids’s opinion about the correct human author of James righty factors into his conclusion that the overall evidence supports the letter having been written at an earlier date, possibly around 40 – 50 AD (22). Before moving on to the commentary itself, Davids provides an overview of James’s theology of Suffering/Testing, Eschatology, Christology, and Poverty-Piety (34-47). He then concludes the theological considerations with issues related to God’s Law, Grace, and Faith; and finally, Wisdom (47-57).

In our modern culture, people tend to avoid speaking positively about “religion”, yet James described a type of “religion” that God recognizes as pure and undefiled (cf. James 1:27). James wanted his readers to understand that the “religion” God favors is one that motivates its practitioners to care for orphans and widows. Davids is careful to point out that God’s commands to care for the orphan and widow are grounded in Old Testament teaching and did not originate with James (102-103).

The Sin of Partiality

The sin of partiality can be ignored or misunderstood in several ways. In recent years there has been a lot of discussion among evangelicals about the need for “justice” but not as much clarification on the foundation and definition of justice that Scripture teaches. Davids shows us how James’s Letter does not allow for the sin of partiality (cf. James 2:1-13), that our justice is not based on changing standards of the culture or sociologists or any other human authority. As he forcefully puts it, “ …those who hold ‘the faith of our glorious Lord’ with partiality are not debasing just any belief, but rather a faith-commitment in the one exalted Lord Jesus whose glory will be fully revealed in eschatological judgement.” (107).

The Letter of James has been described by many commentators as a type of NT wisdom literature. While there is plenty of wisdom to be found in James, I think Davids was right to go further, arguing that wisdom itself is not necessarily the focus of the letter. Wisdom is a gift from God, assured by God, and is grounded in the character of God (72). The fact that wisdom is a gift from God should lead us to recognize the command to ask for it (cf. James 1:5).

Anyone who wrestles with the Bible’s teaching on justification or shares the gospel long enough is going to have to deal with the second chapter of James. Did James and Paul disagree about the nature of saving faith? At first glance, it might seem like James was teaching that works contribute to salvation and was opposing Paul’s teaching that we are saved by faith alone.

I appreciated how careful Davids is in his handling of the text James 2. He writes that if James had read Paul’s words in Romans 3:20, 28; and 4:16 then he must have intended to contradict them; however, he goes on to say that he thinks it is unlikely that James read Romans 3 since James’s vocabulary is so different and because James and Paul were talking about different subjects. (130-131). The “faith” that James is critiquing is not the saving faith that Paul was inspired to champion. James warns against a “faith” that is a mere intellectual confession. Davids argues that “God is pleased only when confessed faith leads to action.” (132).

Originally published in 1982, Peter H. David’s work in the NIGTC: The Epistle of James – A Commentary on the Greek Text is far from being outdated. His use of methods like redaction criticism should be recognized and taken with caution. Readers should also be aware that some Greek words have been left untranslated for the reader. Thankfully, none of this ultimately detracts from the overall value and insights found in this commentary. Those who are serious about seeking to understand what the Letter of James teaches about wisdom, faith, and justification should consider picking this volume up and making it a part of their theological library. Recommended.