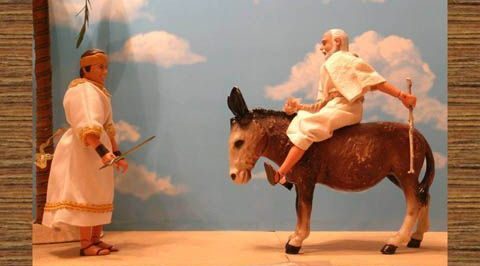 Balaam and His Donkey as a Historical Event

In the 22nd chapter of the book of Numbers, we find the story of Balaam and his talking donkey. I want us to think of this portion of Scripture as a piece of actual history. We hear about beasts of burden speaking to humans and we get the urge to chalk this up as a fanciful tale. I, as one who believes the Pentateuch to be a recording of real events, even have to fight that line of thinking as I read about Balaam and his interesting travels.

In 1967 an inscription was found about an ancient prophet named Balaam, son of Beor. He was described as a man who interacted with the gods and functioned as a prophet, though not necessarily in the biblical sense of the position. He was an itinerant prophet traveling to and fro accepting payment for curses, predictions, and whatever other services a man like him offered. He was a for-profit prophet who likely had good reviews on Angie’s List or Google Reviews or Yelp. He gets hired by Balak the king of Moab to place a curse upon the Israelites who just recently destroyed the Amorites. Balaam likes money as much as the next charlatan and is certainly, even with his “powers”, at least a little intimated by Balak. But something happens between Balak’s request and Balaam’s arrival. Balaam is accosted by the Angel of the Lord on 3 separate occasions and it wasn’t until the 3rd time that Balaam, the supernatural expert, noticed the angel. And it was only after his donkey soundly rebuked him and told him why she (the donkey) kept wandering off the path. Balaam sees the Angel of the Lord with sword in hand, the angel tells Balaam he was close to killing him and letting the donkey live and then instructs Balaam to only say what God tells him to say.

What would it take for a for-profit prophet to forego good money? All he had to do was pronounce a little curse on the Israelites and he’d have been handsomely rewarded! It’s reasonable to assume that something even more motivating than money encouraged Balaam to not curse Israel and in fact bless Israel. That motivation was the fear of the Lord that was no doubt shot into his brain when his donkey began speaking and an angel with a sword was blocking his path!

Balaam speaks blessings upon Israel and calamity upon Balak’s people right in front of Balak! It is reasonable to believe something happened that compelled Balaam to fear the God of Israel more than he feared Balak. The “something” that happened is exactly what is found in Numbers 22.