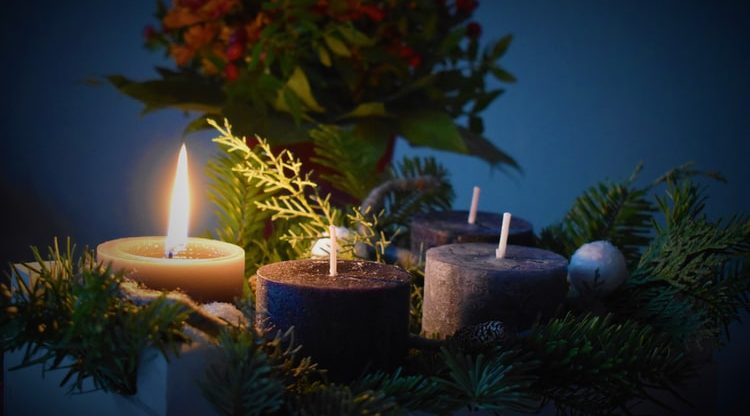 Whether or not the liturgical calendar is even on your radar, we hope these devotions give you an opportunity to think about the incarnation, the reason Jesus came, and afford you the opportunity to dialogue with your family and others about the glory and greatness of Christ, our treasure and King.

Christmas is one month away and Advent begins this coming Sunday, 12/1/19. I’m not trying to skip Thanksgiving, but as we approach this season, I wanted to write something that I hope will be a help to you and your family as we celebrate Christ. Our first Advent Candle of 2015

We have five kids, so we let them take turns oldest to youngest in lighting candles. This is just something we’ve come to love each year as a family. You aren’t more or less spiritual if you celebrate Advent. But it is a focused season to talk about the things of the Lord and to instill helpful and joyful traditions into your home.

Off with His Head

Our first devotion is a bit gruesome. The text before us is Genesis 3:15 which reads:

If your children think waiting 24 more days until Christmas is a long time, how about 4,000 years!? God promised Adam and Eve something for which humanity would have to wait a very long time.

Genesis 3:15 comes at the center of God’s addressing Adam and Eve for their disobedience. God goes to Adam, then Eve, then the Serpent, then back to Eve, and ends with Adam. The beginning and ending with Adam highlights his priority in the human race.

But the centering of Genesis 3:15 and the judgment of the Serpent also highlights that this is a significant promise. Notice too in the verse itself that the text moves from the Serpent to the woman in the first two instances and then reverses that order and moves from the offspring to the Serpent:

If the pattern were consistent, it would be: you, woman, your offspring, her offspring, you, he. The reversal of the order is another signal that this is important — as if to put our focus on this offspring of the woman who would bruise the Serpent’s head.

Here is a flicker of light in the midst of darkness. In the midst of judgment, there is hope for rescue. We don’t see the full plan of redemption laid out here. But we see enough to know that sin does not have the final say. In the distance, we see a glimmer.

This Evil One who beguiled Eve will one day be destroyed by her offspring. That’s the Hebrew word for “seed.” The Seed of the Woman is promised to one day strike the head of the Serpent.

After darkness, light. In the darkness of the Fall in the Garden of Eden, God promised light to come. I think there is evidence that Eve thought it would be Cain. But it wasn’t Cain. Maybe it will be Noah? But it wasn’t Noah. Abraham, Isaac, or Jacob? No, not them either.

Really, the whole Old Testament anticipates the messianic promise of Genesis 3:15. Who will arrive, the offspring of a woman, to crush the Serpent’s head?

David? No, but it will be his Son. Well, is it Solomon? No. What about Asa or Josiah? No, not them either.

The Law and the Prophets bear witness to Him. The Psalms expect Him. Isaiah says He will be called Immanuel — God with us. And the angst and longing of the faithful in the OT is “O Come, O Come Emmanuel! And ransom captive Israel!” Deliver us! Crush the Enemy!

Where is He? The One promised of Old? Where is the One to bruise the Serpent’s head?

Do not be afraid, Mary, for you have found favor with God. And behold, you will conceive in your womb and bear a son, and you shall call his name Jesus. He will be great and will be called the Son of the Most High. And the Lord God will give to him the throne of his father David, and he will reign over the house of Jacob forever, and of his kingdom there will be no end. (Luke 1:30–32) Since therefore the children share in flesh and blood, he himself likewise partook of the same things, that through death he might destroy the one who has the power of death, that is, the devil…

Adam and Eve and all humanity deserve God’s wrath. And honestly, many will receive that wrath in righteous judgment. “But God so loved the world that He gave His only begotten Son that whosoever would believe in Him should not perish but have eternal life.”

God in His sovereign love said sin will not have the final say. God created mankind to glorify Him and enjoy Him forever and God will have that realized in a people redeemed by the Serpent-crushing Savior, Jesus Christ.

And Christmas is about this offspring of the woman come to save His people from their sins by bearing God’s wrath on their behalf on the Cross and resurrecting from the dead, defeating Satan.

Praise God for His promises which all find their yes in Christ Jesus.