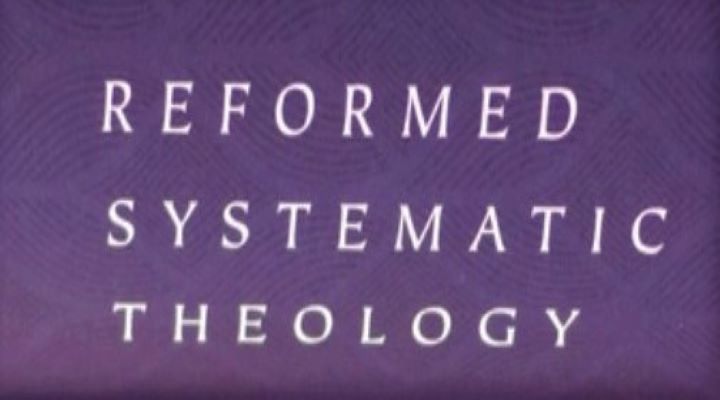 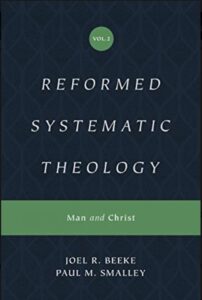 Joel R. Beeke is the president and professor of systematic theology at Puritan Reformed Theological Seminary. His other books include Puritan Theology: Doctrine for Life, Heirs with Christ: The Puritans on Adoption, and Parenting by God’s Promises: How to Raise Children in the Covenant of Grace.

Paul M. Smalley serves as teaching assistant to Dr. Beeke and is pastor of Grace Immanuel Reformed Baptist Church. He co-authored Feasting with Christ: Meditations on the Lord’s Supper, John Bunyan and the Grace of Fearing God, and Prepared by Grace, for Grace: The Puritans on God’s Way of Leading Sinners to Christ.

We previously reviewed Reformed Systematic Theology Vol. 1: Revelation and God here, and now we have the privilege of digging into Vol. 2: Man and Christ. The series will eventually be made up of 4 volumes. The second half of this series, yet to be released, will cover the Holy Spirit (pneumatology) and Salvation (soteriology) in Vol 3, and the Church (ecclesiology) and Last Things (eschatology) in Vol 4.

Vol. 2 contains Parts 3 and 4 of this extensive series. Part 3 covers the doctrine of Man (anthropology) and Part 4 the person and work of Christ (Christology). As with the previous volume, each section examines aspects of these subjects from exegetical, historical, and experiential perspectives; and each chapter ends with a hymn and discussion questions. The authors have stated from the outset of this series that their goal is to never present doctrine as a purely intellectual exercise, but rather to balance the head, heart, and hands.”

Beeke and Smalley recognize the danger of elevating human beings through rigorous study of man. Instead, they rightly see the study of mankind as an aspect of giving glory to God. Anthropology should serve as means to use God’s Word as a mirror “to see what we are, so that, by grace we may become what we should be (37).” The authors reason that it is good and proper to study man since it is good to study the work of God and the creation of man—who was the climax of God’s creative work (39).  Not only that, but the study of Anthropology helps us understand Christ better because it helps us understand what God intended for us to be and what we will become through union with Christ (40). Scripture provides clarity on the human condition in a way that is “realistic”, “idealistic” in the sense of giving us goals worthy of aspiring to, and “optimistic” (42).

Man and the Divine Covenants

Once again, we find ourselves confronted with the sometimes difficult study of how best to understand covenant in the Bible. Beeke (a Reformed pedo-baptist) and Smalley (a Reformed credo-baptist) demonstrate extensive familiarity and charity on the subject of covenant. They dedicate several pages to Particular Baptist covenant theology (549-552). In a brief section on Reformed Baptist “1689 Federalism”, the authors explain how the movement’s earliest figures such as Nehemiah Coxe, Benjamin Keach, and others rejected the Westminster teaching that the Old and New Covenants are two administrations of the one Covenant of Grace (550).

The authors also interact with Classic and Revised Dispensationalism and their formulations of redemptive history (552-558). They cover the major proponents of the movement like John Nelson Darby, C.I. Scofield, and Lewis Sperry Chafter. The authors also introduce us to lesser-known figures Manuel Lacunza and Bernard Lambert, two Roman Catholic theologians whose ideas were picked up and expanded on by dispensationalists (555). Modern revisions to dispensational theology followed into the next century by John Walvoord, Dwight Pentecost, and Charles Ryrie (557-558).

More recent formulations of covenant including Progressive Dispensationalism, New Covenant Theology, and Progressive Covenantalism are also explored in this volume (558-561). The authors conclude this section with a helpful and charitable summary of the various perspectives (561-562). While this volume is not focused on the subject of covenant as other books are, it includes plenty of material that should prove informative to many readers.

The authors do not shy away from the provocative idea that sinners are saved by obedience, specifically, the obedience of Christ (1033). The Reformed tradition distinguishes between Christ’s “Passive Obedience” in which he willingly went to the cross and his “Active Obedience” in perfectly fulfilling the requirements of God’s law (1037-1048). Christ, the Lord’s “righteous servant” had to be the one to justify God’s people (cf. Isaiah 53:10-11). Interestingly, the Savoy Declaration and Second London Baptist Confession both explicitly state that believers are counted righteous “by imputing Christ’s active obedience unto the whole law and passive in his death for their whole and sole righteousness (1037)”. In contrast, the Westminster Confession does not distinguish and simply refers to Christ’s “obedience and satisfaction.”

The authors connect Christ’s prophetic work to obedience and make what I suspect may be a possible swipe at “Eternal Functional Subordination” (EFS). They write that Christ’s “obedience is all the more glorious because he is not a subordinate worker, but heir and owner with the Father (940).” Beyond this statement, I did not come across direct references to EFS.