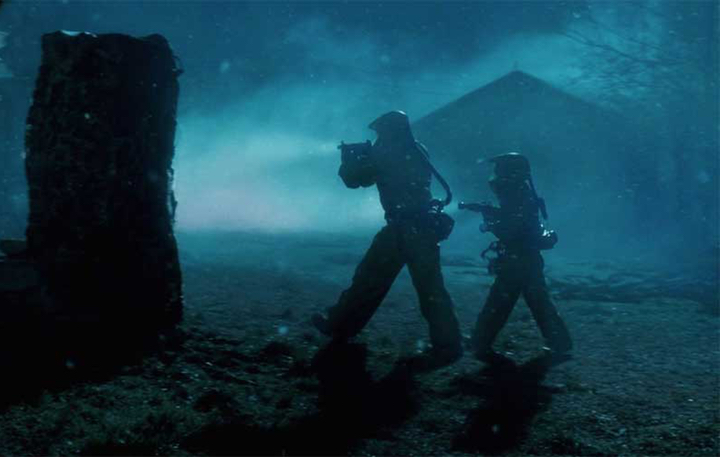 My Wife’s Stroke and The Upside Down

In Stranger Things episode eight, Chief Hopper and Joyce enter “The Upside Down” for the first time in their search for young Will, who had been abducted by a predatory humanoid creature called a “Demogorgan.” For those of you who haven’t seen the series just yet (are you crazy?!), according to Wikia, “The Upside Down is an alternate dimension existing in parallel to the human world. It contains the same locations and infrastructure as the human world, but it is much darker, colder and obscured by an omnipresent fog.”

That omnipresent fog: I remember taking special note of that “omnipresent fog” a month ago as my wife Deb and I watched Chief Hopper and Will’s mom slowly treck through that grey, lifeless world. The scene, when you get a chance to binge-watch it, is quiet, dark, and mesmerizing. Hopper and Joyce are visibly frightened as they hold flashlights and sub-machine guns, experiencing the worst and bracing for more of it. Both are wearing Hazmat suits to protect themselves from whatever glimmering white junk is in the atmosphere, but their faces are still visible enough to notice their determined grimmaces. Everything is eerie and cold, and, aside from the alien-like squeals in the background, the silence is deafening. Chief Hopper and Joyce enter “The Upside Down” for the first time in their search for Will.

A month ago, my wife Deb and I walked into our own version of the cold, dreary, and endlessly-foggy Upside Down. No, our child wasn’t abducted by a fictional monster, thankfully, but we too were experiencing the worst and bracing for more of it. We were surrounded by what felt like omniscient fog, but by God’s sovereign grace, like Joyce and Chief Hopper, we survived with everyone’s lives in-tact.

Thirty-six weeks pregnant is a scary time to have a mini-stroke if you ask me, particularly if you’re the ripe ol’ age of twenty-eight. It just doesn’t happen very often. I had just finished getting a fire started in the fireplace and sat down just in time to subject myself to another Chicago Bulls loss. Deb sat next to me with my daughter on her lap, ready to read her a story. This was the kind of scene I remember dreaming about as a kid, even as a married man decades later. Five years of missionary training and upwards of ten moves, including one gigantic transition into the jungle of Papua New Guinea never really permitted this American-family, Hallmark moment.

We were okay with that, though. We believed firmly in the spine-tingling truth of 2 Corinthians chapter four that these light, momentary afflictions were producing in us an eternal weight of glory. We clung to the truth of Matthew 19:29 that “everyone who has left houses or brothers or sisters or father or mother or wife or children or fields for my sake will receive a hundred times as much and will inherit eternal life.”

Through dangerous health concerns and the wisdom of our mission organization, God’s good and gracious providence led us home. His steady, Fatherly hand brought us here: sitting on a couple couches in our basement with a fire roaring, the Bulls losing, and my wife growing increasingly confused. As she read, the words got blurrier, then a bit scrambled. This should have been a cause for alarm as, you know, this wasn’t normal or anything, but my brave warrior of a wife squinted a little harder and turned the page.

Then she entered The Upside Down.

Lauri Markkanen probably hit a three-pointer, taking the channel to commercial, when I looked over in her direction.

Tears were streaming down Deb’s face, and she was obviously shaken about something. She started a sentence, but now she couldn’t finish it. I found out later that she really, really wanted to show Mia where the baby was moving in her stomach, but couldn’t get the words out.

She couldn’t talk, and, after trying unsuccessfully to Google something — anything — to figure out what was going on, well, that’s when I looked over and officially entered The Upside Down with her. We hurried to the ER, and were immediately transferred to another, more capable ER one-hour away. They ran her and our unborn baby through every test imaginable to determine what exactly happened and if everyone was okay.

Praise God, they were.

Certainly, we rejoice in the grace of God and His constant care for us. He cared for us during tribal fights, drunken-encounters with Kuman brothers, depression and anxiety, and extreme ministry transitions. In allowing dark times in our lives, God has crowded us further and further into the arms of our sufficient Savior.

Like Joyce and Hopper, it’s possible we’ll find ourselves in The Upside Down again, surrounded by that omnipresent fog. According to the America Stroke Society “TIAs are often labeled ‘mini-strokes,’ because they can be relatively benign in terms of immediate consequences. But the term ‘warning stroke’ is more appropriate for these temporary episodes, because they can indicate the likelihood of a coming stroke.

Our doctors tell us that those who are prone to TIAs are likely to have more, and, sometimes, they get more serious — so, please pray for her.

Hudson Jacob Bullington was born two weeks later a healthy, happy eight pounds, twenty inches tall. My wife’s other two pregnancies were memorable (one was in a third-world country full of disease and malaria-ridden mosquitoes), but Hudson’s takes the proverbial cake.

I’ll leave you all with a quote from my wife literally hours after the episode: “I was able to endure because of Him. I simply rested on truth and trusted in His loving discipline. I know life is a vapor and He wants my heart more than my comfort.”

Single, Christian men: put away childish lusts and desires. Instead, find yourselves a wife that loves Christ like that.