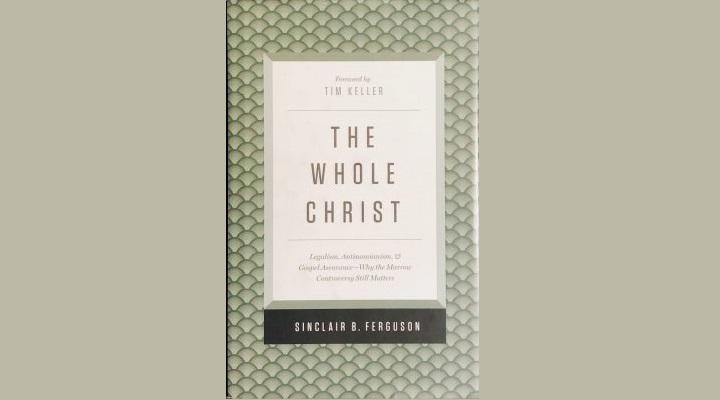 In “The Whole Christ,” Sinclair Ferguson masterfully addresses the challenge of assurance of salvation with a rare combination of a pastoral sensitivity, historical intrigue, and theological precision.

Who Should Read This Book?
This book is for any serious Christian who desires to know Christ’s work for sinners more deeply, and how to biblically proclaim Christ to sinners. It can also serve as earnest but gentle counsel to any believer who has ever struggled with assurance of salvation. There are complex theological and doctrinal questions addressed, but Ferguson’s focus remains on bringing his readers to the joy and rest found in gospel assurance.

In The Whole Christ, Sinclair Ferguson begins with a historical analysis of the events concerning the Marrow Controversy and Thomas Boston’s rediscovery of The Marrow of Modern Divinity by Edward Fisher. These events and the theological debates surrounding them function as a framework for Ferguson to explore questions that remain relevant to Christians in every time period. Along the way, meaty doctrinal questions about pastoral soul care, covenant theology, theonomy, the New Perspective on Paul, and Roman Catholicism are all touched on and handled carefully if not exhaustively. Most importantly, Ferguson keeps his focus on questions relating to the nature of legalism, antinomianism, and how believers can have assurance of salvation.

Sinclair Ferguson begins “The Whole Christ” by relating an obscure but fascinating bit of church history from the Scottish Presbyterians in the early 1700s. In 1717 a ministerial candidate named William Craig was asked to agree to a statement known as the “Auchterarder Creed.” The statement was this: “I believe that it is not sound and orthodox to teach that we forsake sin in order to our coming to Christ, and instating us in covenant with God.” (pg. 28) How many of us would be able to answer that question in a biblical manner, much less understand the theological categories involved? Ferguson asks the reader directly, “How would you respond?” A wise response would have to start with, “It depends…” Craig initially affirmed the creed but later had second thoughts and asked to change and explain his answer. The council heard him out and subsequently revoked his license to preach the gospel.

Thomas Boston decided to enter into this controversy, recommending a book he had discovered which he believed clearly laid out the true nature of the gospel. The book was called The Marrow of Modern Divinity by “E.F.” The true identity of “E.F.” was a matter of mystery and speculation, but eventually a barber-surgeon named Edward Fisher was identified as the author. Yes, apparently “barber-surgeons” were a thing back then.

“The Marrow” was written in the style of a dialogue between characters each representing a point of view. Think of a screenplay or stage-play and you will get the idea. The characters are a struggling new Christian called “Neophytus,” an evangelistic pastor named “Evangelista,” a legalist called “Nomista,” and an antinomian called “Antinomista.” Let’s just be thankful that Fisher made it easy to keep up with who is who in all this. The dialogue/stage-play style makes for an interesting format to explore heavy questions about the nature of the gospel, the Christian’s relationship to God’s law, the biblical covenants, and assurance of salvation. Thomas Boston added his own thoughts and appendices to the work, which are included in reprints of The Marrow.[1] Boston and those who agreed with its theology became known as “The Marrow Brethren.”

In the introduction to The Whole Christ, Tim Keller points out that this controversy happened despite all parties involved affirming the Westminster Confession of Faith, one of the most carefully worded theological statements ever made. What we can draw from this is that having a robust confession of faith, such as the WCF or Second London Baptist Confession, can be a helpful guardrail, but it is not an absolute guarantee of total unity.

Ferguson uses the controversy around The Marrow and it’s influence in the Scottish church to explore what it means for a Christian to fall into legalism or antinomianism. What is antinomianism? Ferguson helpfully describes antinomianism as a view that “denies the role of the law in the Christian life” (pg. 140). To be an antinomian literally means to be “against law.” In our modern context it has been known as “Carnal Christianity,” “Hyper Grace,” “Easy Believism,” and so on.

Anyone who has been a Christian long enough has experienced the pain and frustration of knowing professing believers who show no signs of actually being Christ followers in their daily lives. Those involved in personal evangelism are frequently told: “How do I know I’m saved? I walked down the isle/ said a prayer/ signed a card when I was (fill in the blank) years old.” The tell-tale emphasis is on something done by the speaker, not on what was done by God. Scripture gives a sober warning that there will be those who one day hear from Christ Jesus himself, “‘I never knew you; depart from me, you workers of lawlessness.” (cf. Matthew 7:23)

Unlike antinomianism, “legalism” is a fairly well-known term, not just among evangelicals, but in the wider culture also. The label of “legalist” is commonly used to describe someone who is seen as over emphasizing laws, rule keeping, and obedience to a strict set of standards. No one wants to be called a legalist, but how are we to understand Christ’s words to his followers that “If you love me, you will keep my commandments?” (cf. John 14:15)

It is easy and, in some ways, logical to think of legalism and antinomianism as ditches on opposite sides of a path or a set of scales that are out of balance. Stray too far to the left and you fall into antinomianism. Stray to far to the right and you risk being a legalist. In some ways, these can be helpful mental images, but Ferguson challenges this way of thinking. He makes the case that “legalism and antinomianism are, in fact, nonidentical twins” (pg. 84). The problem with the path or scales analogies is that they imply a person can course correct by going into the opposite direction. “You’re too legalistic? You need to be a little more lax about God’s law, but not too much.” Or, “Hey, you’re being to loose and worldly. You should be just a little more strict and judgmental and you’ll be back on course.” Of course, no one actually talks that way, but it is possible to unintentionally communicate this message without realizing it. Ferguson recognizes that a faulty view of the gospel can lead to “the mistake of prescribing a dose of antinomianism to heal legalism, and vice versa, rather than the gospel antidote of our grace-union with Christ” (pg. 86). Ferguson engages in his own bit of creative screenwriting on the following page in a brilliant exchange between “Dr. Pastor” and “Fred Legality” that imagines what an overly simplistic “cure” for legalism might sound like (pg. 87).

As Paul teaches, in some sense, Christians are “dead to the law” (cf. Gal 2:19). Thomas Boston insightfully described how the legalistic Christian can sometimes be haunted by “the ghost of the dead husband, the law, as a covenant of works”[2] which makes demands, commands, threats, and frightens them. What may shock some readers is Boston’s assertion that the Lord allows this to happen for the good of believers in order to bring about “correction, trial, and exercise of faith.”[3] Following Boston’s insights, Ferguson recognizes Paul’s similar use of a marriage metaphor in Romans (cf. Rom 7:1-6). Ferguson then carries this imagery further and describes a believer as someone with a finished “old marriage to the law.” Lack of assurance can come when believers are “haunted by the memory of the former husband” and the only remedy is “to live in the awareness that the new husband (Christ) abounds in more grace than the abusive husband did in condemnation” (pg. 122).

It’s been said that the goal of the gospel minister should be to comfort the afflicted and afflict the comfortable. How does one fully receive and rest on Christ as Lord and Savior? When has a believer fallen into lawlessness, more technically known as antinomianism? Or when have they fallen into legalism? Is the gospel the balanced position, with antinomianism and legalism as opposite extremes? Are they on opposite ends of a spectrum? Sinclair Ferguson brings pastoral concern, historical and systematic theology, and most importantly scripture to bear on these questions. This is easily one of the most edifying and important theological books in the past 10 years.

“The gospel never overthrows God’s law for the simple reason that both the law and the gospel are expressions of God’s grace.” (pg. 88)

“The Bible is an extended narrative of God’s grace from start to finish.” (pg. 90)

“(Satan) knows he cannot destroy the salvation of God’s people; but he is bent, indeed hell-bent –as he was in Eden—on destroying our peace, liberty, and joy in God.” (pg. 133)

“At root then antinomianism separates God’s law from God’s person, and grace from the union with Christ in which the law is written in the heart.” (pg. 154)

(Previous version of this review appeared at TCB Media.)