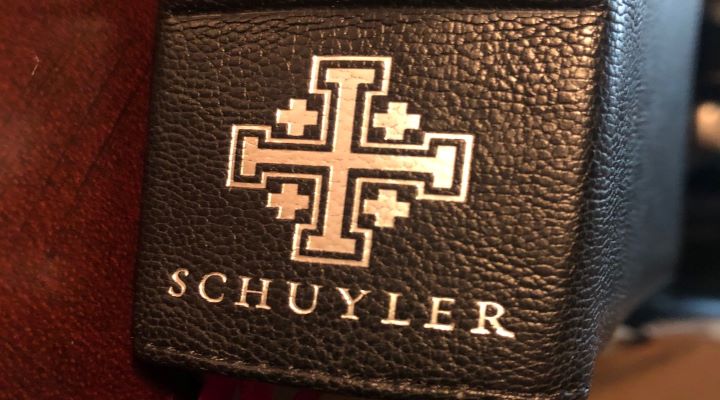 If you have kept up with the growth of the premium Bible market, you have probably at least heard of Evangelicalbible.com and the Schuyler (pronounced “Sky-ler”) name. I was surprised to learn that the company has its origins in grass roots efforts by a church planter in 2004. The founder, Sky Cline began producing these bibles to support missions work to lower income areas and to get God’s Word and the gospel of Jesus Christ to all the world. The Schuyler name is now synonymous with premium bibles. Evangelical Bible and Schuyler created the Quentel ESV to serve as a classic reference bible, but made by expert craftsmen with the best materials available. The design of the typesetting was done by 2K in Denmark, with the printing and binding coming from Royal Jongbloed of the Netherlands. The paper is an opaque 28gsm, creating a nice balance between thickness and translucency.

I have to briefly note that the particular bible I was sent has a slight irregularity you can see if you look closely. There is a faint imprint of the block used to stamp the cross on the front cover. To be clear, this was a minor imperfection and does not represent the excellent work you can expect from Schuyler and Evangelical Bible. er colors are available to from Evangelical Bible, but I found the black and red to be an attractive combination. The grain pattern on the leather is completely natural, not stamped from a preset mold that was made to look natural.

There are 6 raised ribs along the spine. Between the ribs are the words “HOLY BIBLE”, “ENGLISH STANDARD VERSION”, and the SCHUYLER logo and name all stamped in silver. The cover is flawlessly perimeter stitched. The pages are art gilded in red under silver. There are 3 red ribbons included which extend out below the page, creating the look of a bright red tail. The Quentel ESV uses the 2016 Permanent Text edition of the ESV translation. The font is a generous 11-point Milo. The biblical text is printed in black, while each new chapter number is printed in large red numbers. Each page also features headers with the book of the bible and chapter and verse range for each page all printed in red, which can be helpful when needing to quickly turn to a particular passage. References are laid out across the bottom of the page. There are occasional notes about translation choices, but they are rare and printed in the lower righthand corner of the page between the text and references. At the back of this bible is a standard concordance and Schuyler’s Bible maps.

The biblical text itself is double-columned and line matched so that the text on one side of the page overlaps the text on the opposite side of the page. The 28gsm paper is pleasant to the touch. The Quentel’s size is what I would call larger than a thinline and smaller than a study bible. Schuyler also offers a smaller “Personal Size” Quentel with the same pagination as the full size version While not quite a readers bible, the Quentel’s features all contribute to a much more distraction free reading experience than many other bibles I have seen. Evangelical Bible’s Schuyler imprint continues to serve as a one of the best premium bible publishers right now. Yes, you will pay more for a premium bible than others, but this is an investment that is meant to last for decades and be passed down to our children. How many of us have paid upwards of $500 for phones or other devices that we replace in 1 or 2 years at best? Schuyler’s Quentel ESV is an heirloom quality Bible that should be seriously considered by anyone who has the means to get their hands on.

A copy of this Bible was provided by the publisher in exchange for an honest review.