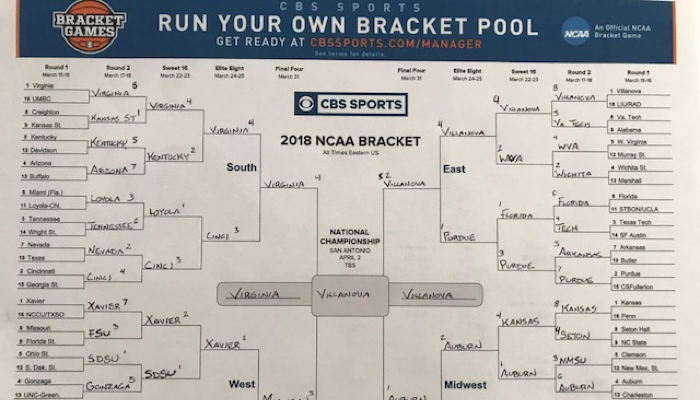 One of the first big purchases I made in high school after I started working as a lot boy at a local car dealership (coolest high school job ever, by the way) was a 19” TV and an off-air antenna. I bought them for the sole purpose of watching March Madness games in my room on school nights. This is telling both of my love for the NCAA Tournament and how much more disposable income I had as a teenager than I do as an adult. I wish I had a clearer memory in regards to when my love for this 64-team playoff began. I only know that I cannot recall ever not loving it. Better stated: I only remember loving it.

Every year I try to develop some profound analytic to give me the edge over everyone else and, by the time I’m done, I somewhat expect to have a perfect bracket even though I know a perfect bracket will likely never happen for anyone. Then I implement this analytic into my selection process by completely ignoring it and picking the games based on match-ups, what I want to happen, NBA prospects, and teamwork. Let’s get into this year’s bracket:
Rather than breaking down every single game I’ll just run through some of the highlights.
My upset picks in the opening round are:

-South Dakota St over Ohio St. 12 seeds have been notoriously successful in facing 5 seeds, especially in the last decade. Prior to the brackets being set I had OSU and SDSU in my mind as a sleeper and a Cinderella. Unfortunately, they’re playing one of the first games of the tournament. SDSU has Mike Daum, one of the best scorers in the nation, and they have experience. Ohio St has exceeded expectations all season and not been playing great as of late. Luckily for them they’re not facing Penn State, yet SDSU is probably the best team below the 11 seed line. I have SDSU beating Gonzaga, too before losing to Xavier in the Sweet 16. -I also have Loyola-Chicago knocking out Miami in the South region. Miami’s coach, Jim Larrañaga, took 11 seed George Mason to the Final Four in 2006 – beating Michigan St, North Carolina, Wichita St and Connecticut before losing to a Florida team that was one of the best teams of the last 25 years. Now it’s his turn to know what it feels like to be on the wrong side of a Cinderella story. I have Loyola beating Tennessee in the next round and then losing their next game against Cincinnati (a pick I’m not real confident about).

-My last big upset in the 1st round is New Mexico St over Clemson. Clemson is missing a key player and New Mexico St won a lot of regular season games and has been a good program for a while, so they’re due for a win.

I didn’t pick any 13, 14, 15, or 16 seeds to win only because I’m don’t have much success in picking those games. Of all the high seeds to be susceptible to a first round loss I think Cincinnati, Gonzaga, Wichita St, Texas Tech, and Michigan St are the most likely. I’m not confident enough in any of those games to pick the favorite to lose, but I think any of them could lose (honestly, any team could lose so that was a useless statement).

I don’t have any 1 or 2 seeds losing in the opening weekend (highly unlikely this will happen). I have the least amount of faith in Xavier and Kansas as far as 1 seeds but don’t think their early matchups are real intimidating so I don’t have Kansas losing until they face Auburn and Xavier then loses in the Elite 8 to TTUN*.

In the Final 4 I have the tournament’s #1 overall seed, Virginia playing red hot Michigan and their outstanding March coach and then Villanova playing Auburn.

Feel free to join our bracket contest on Yahoo.

* Editor’s note. Out of respect for Tim and for readability I did not change all instances of the “M” word to TTUN. — Michael