From the Back Cover

In this attractive volume, Simonetta Carr introduces young readers to the life, thought, and work of one of the most famous Reformers of the Christian church. She tells about the life of John Calvin from his birth to his death, placing him within the troubled context of the sixteenth century.

Carr also introduces Calvin’s writings in a way that children will desire to know more about his ministry and influence. Readers will come to know Calvin’s personality, his devotion to God and the church, and the personal challenges he faced. They will understand the struggles the early Reformed church faced at that time, not only surviving attacks of the Roman Catholic Church, but also achieving a clear identity and a unified doctrine. They will also have a glimpse of life in sixteenth-century Europe, stricken by pestilence, poverty, and wars. Simply written, and full of interesting facts, this book makes a great gift for children of this rich Reformed heritage. 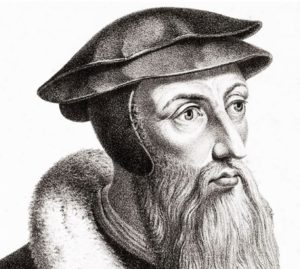 John Calvin outlines the life of a man who is most known for the theology that bears his name “Calvinism.” Yet Calvin as a man and a pastor was much more than just the “five points.” We see God’s providence in his life as he, like many in his day, began as a Roman Catholic and was eventually led out of darkness into the light of God’s Son. We are reminded that he was just a man (and not superman like we sometimes think when reading his writings) when we read the semi-famous story of his friend William Farrell calling a curse on him if he would not go to Geneva. And we see his compassion as he married a widow with children and was a dedicated family-man and church-man.

Calvin’s grasp of doctrines was so vast and deep that he is considered one of the greatest theologians ever…but his talent lied in his understanding and skill in making those great truths understandable to laymen. For this reason, I strongly recommend everyone read Calvin as soon as they can! 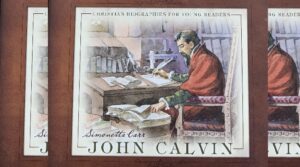 As usual, Carr provides a brief yet intriguing synopsis of the life of a man of God in a way that even small children can sit through and understand. She delves into theology enough to make clear some important doctrines without making the book itself a theological treatise. John Calvin’s life lived for God and his desire to serve Christ even amidst danger and suffering should be an inspiration to all those who have been born-again.

Recommended without reservation for everyone age 7 and up, especially at only $12 as of September 2021 at the RHB website.

Biographical Sketch of Author and Illustrator

Award-winning author Simonetta Carr was born in Italy and has lived and worked in different cultures. She worked first as an elementary school teacher and then as a home-schooling mother for many years. Besides writing books, she has contributed to newspapers and magazines around the world and has translated the works of several authors from English into Italian and vice versa. Presently, she lives in San Diego with her husband Thomas and the youngest of her eight children. She is a member and Sunday School teacher at Christ United Reformed Church.

Emanuele Taglietti is an Italian set designer and painter. Born in Ferrara, he has worked on several movie sets with great directors such as Federico Fellini, Marco Ferreri, Sergio Leone and Ettore Scola.

Note from Michael – This illustrator seems to have been a part of some projects that contain immodest images. Nothing like that is reflected in the John Calvin volume, but I’d recommend you don’t chase this guy’s other work.

This series introduces children to important people in the Christian tradition. Parents and school teachers alike will welcome the excellent educational value it provides for students, while the quality of the publication and the artwork make each volume a keepsake for generations to come. Furthermore, the books in the series go beyond the simple story of someone’s life by teaching young readers the historical and theological relevance of each character.

Psalm 96 is a wonderful song written by David as part of a larger song of thanks which is introduced to us in 1 Chronicles 16. I was scheduled to preach a topical sermon at the 2020 Psalms & Worship conference in Canton, OH on the topic of “Worship in Evangelism,” and I thought Psalm […]

It is the law of God, held before a sinner, that exposes and even entices the indwelling sin. Remember Romans 7? Consider verse 8: “But sin, seizing an opportunity through the commandment, produced in me all kinds of covetousness. For apart from the law, sin lies dead.” There is something about God’s correction which actually livens up the sin that at times lays dormant in our flesh.

Last weekend, we had 6 men preaching God’s Word in our group. We split into two groups of 3 and separated physically. This allows us to always have 2 men preaching the mystery of the gospel. So we were able to achieve nearly 5 hours of street preaching in 2.5 hours, with each man carrying no more than about an hour of the load. But this week, I was the only preacher, and I was committed to filling the time. How God enabled that to happen is truly remarkable!

The great hymn writer Charles Wesley once wrote: Veiled in flesh the Godhead see; Hail th’incarnate Deity, Pleased with us in flesh to dwell, Jesus our Emmanuel. (source) This is a most beautiful and theologically rich line, but it’s not without some historical controversy. I’m referring to how we understand the person of Jesus. In […]

As we consider the unmatchable holiness of God (read part 1), I think there is practical application for worship in the local church. As we think about the heavenly beings described in the last post, may we not learn a few things about what it means to worship a God who alone is holy? It […]

Carson, Baseball, my boy, is a beautiful sport, and I thank our gracious Lord that I had the opportunity to play it for quite a few years. Basketball is the GOAT, football is incredible, but baseball—baseball is beautiful. Some say soccer is beautiful, but don’t listen to them. Baseball is aesthetically delightful. Yes, it’s slow, and […]