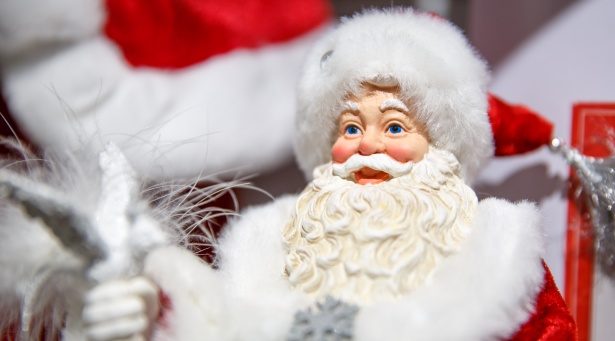 What I Tell My Kids About Santa Claus

Contrary to the dogged assertions of certain people on this blogging team, and despite my generally Grinch like disposition, I love Christmas! I love the songs, the change of weather, the beautiful displays and decorations, and of course I love the food! At least half of my favorite hymns are Christmas hymns, and probably half of my most cherished traditions revolve around the Christmas season. Having children makes Christmas ten times more fun. Not only is it fun to watch their excitement grow as the day approaches, but I also have a great sense of satisfaction and joy in passing on the traditions and memories of Christmas’ in our past, and of the holiday in general. It should not be said that such traditions don’t matter. As we unpacked our Christmas ornaments and trimmed our tree this year, our older two foster children enjoyed quizzing my wife and me on the stories behind each of our ornaments. We would tell them of buying an ornament to mark an occasion (like our engagement), or the ones we made as children. Yet, it became quickly evident that they didn’t have any idea what Christmas was all about as we explained to them the different mangers, stars, wise men, and other Biblical symbols that overwhelmed our collection. They just didn’t know that Christmas was meant to celebrate a Baby born long ago to a virgin and laid in a manger. We also shifted our customary lullabies and bedtime songs to Christmas “carols” (they’re all hymns in our house) and were met with disappointment as the children thought we would sing “Jingle Bells” and “Rudolph the Red Nosed Reindeer.” Instead, they were treated to a lesson in Christology through “Hark the Herald Angels Sing” and other such wonderful hymns. Do you see why I love this season so much? I didn’t have to conduct a class or force a time of Bible Study (not that there’s anything wrong with that) with them to teach them — I just had to do what we always did, and they learned about the Lord. What a blessing Christmas is to us!

That really is the point though, isn’t it? Our traditions exist and are inculcated in our families for a reason. They teach, and once the lesson is learned, they reinforce and reteach and remind and revamp those lessons in us. Traditions connect the emotions to the intellect. They take facts to be memorized and rehearse them in a meaningful way, engaging the emotions and engaging the whole person. So, we bake cookies, open presents, decorate trees, and sing special music during Christmas because we are convicted that what Christmas celebrates is important. And that, dear friends, is why we don’t include in our traditions the most popular of them all: Santa Claus.

The bottom line is this: We simply do not want to lie to our kids. Santa is obviously a fictional character. It may be fun to tell fictional stories, and it may be cute to get pictures of kids with actors dressed up like those characters like one might do at Disney World. Yet that’s a far different thing than to persistently and consistently lead young children to believe that those characters are real. Every one of my foster kiddos has liked to play pretend, as did my own child. That’s fun and an important part of their development. But the difference between pretending and lying is knowing the truth. I can pretend to be the unicorn king at my daughter’s tea party, but both my daughter and I know it’s just a game. If I, as is often done with many children, persist in convincing her that a jolly old elf comes down our non-existent chimney to give her gifts that I’m currently paying the credit card company for her to have — and she believes it’s really the truth — then I’ve gone far beyond pretending. I’ve lied to my kid, and worse yet, I’ve taught her to lie. As Christians, we simply can’t do that.

How I Teach My Children

Nonetheless, I don’t shrink in fear at the very sight of a red hat or a red nosed reindeer. That stuff can be fun, cute, and when done in the right context, harmless. More to the point, however, is that my children will meet other adults who handle the situation differently. Not a season goes by without some adult insisting to one of my kids that Santa is indeed coming, and 9 times out of 10 that person is a family member. We must be thoughtful in handling those situations.

The first thing I tell my little ones is that it’s ok to pretend. So, when they meet someone quizzing them about sitting on Santa’s lap, or writing him a letter, it’s not a moment to panic and run away. Smile sweetly, tell the truth, and indulge the person. Ask them if they wrote to Santa or if they sat on his lap yet. If it’s an adult, they usually get the message and move on to Christmas in general and if it’s a kid they usually keep on pretending — and what’s wrong with that? The point here is there’s no need to turn my children into anti-Santa crusaders or into “Jesus is the reason for the season” evangelists. Let people have their fun, adults and kids alike. It’s not up to my 5 year old to correct and instruct.

Sometimes the conversation takes a different turn and the “believer” tries to “fix” my kid. At this point, I step in if I can; but often the kid is in a situation (school, family gathering, etc.) where they’re put on the spot. Almost always the person at this stage of the conversation is an adult and so I’ve taught my kids to simply say “Santa isn’t real” or “Mom and Dad buy me gifts” and to just stick with that. To do that, I have tried to prepare my kids ahead of time by explaining that many people believe all kinds of things that aren’t true and some try to get others to believe untrue things too. I’ve found that entering these tough moments with that perspective helps my kids to be resolute in their assertions and not feel uneasy about what to do. That doesn’t mean they like those moments, it just means they’re equipped to handle them. An ounce of prevention is worth a pound of cure. I think the most difficult thing a parent faces is how to prepare their kid to handle another child questioning if there is a Santa Claus. It’s unfortunate that a child could face such a tense situation, but the fact is anyone committed to truth is going to face tense situations throughout their lives. It’s moments like these where our proverbial rubber has to meet the road of reality regarding our convictions. So, for my own kids, I’ve decided that it’s never too early to train them on how to handle moments like this; and in that spirit, I’ve taught them to simply tell the truth. Yes, they are going to “ruin” another kid’s supposed “innocence.” Yes, there is no putting that cat back in the bag. And yes, the mom or dad of the “offended” child is probably going to be pretty upset with me. But I’ve resolved that while it’s fun to pretend, and while there’s no need for a crusade, at some point the truth is what must matter to us as believers and so it must matter to my children as well.

So then, when that angry parent comes knocking on my door and demanding to know why my child ruined everything, or why I’m “depriving my child of a childhood” I tell them exactly that. The truth matters, and it should matter to them and their children too.  I see those moments with the angry parent as discipleship, or even evangelism if they aren’t saved; and with my kids I see them as opportunities to teach and train.

I don’t feel the need for this issue to rocket to the top of my list of priorities, even during this time of year. Quite simply, it’s my own conviction and not some sort of clearly defined point of doctrine. Yet, I don’t understand why anyone would want to lead someone astray or pretend as if a lie is the truth. It’s fun to pretend, so let’s watch the old school claymation of Rudolph the Red Nosed Reindeer and enjoy its charm. Go ahead, read “The Night Before Christmas” and smile at its warm and engaging story. There’s not anything more wrong with that than watching the latest super hero movie. But when it comes to what’s real, let’s be people who deal in reality. Let us clear away this strange attachment we have to this charade and simply focus on what Christmas is supposed to be: the incarnate Son of God, veiled in flesh, come among us as a child in an ancient town, to a virgin mom, and worshiped by no-name shepherds who rejoiced to see His day. That should be enough for us, and it should be what our children remember as they grow old. Let our minds focus on it, and let our traditions revolve around that beautiful and profound truth. When that happens, trust me…you won’t miss Santa anyway.