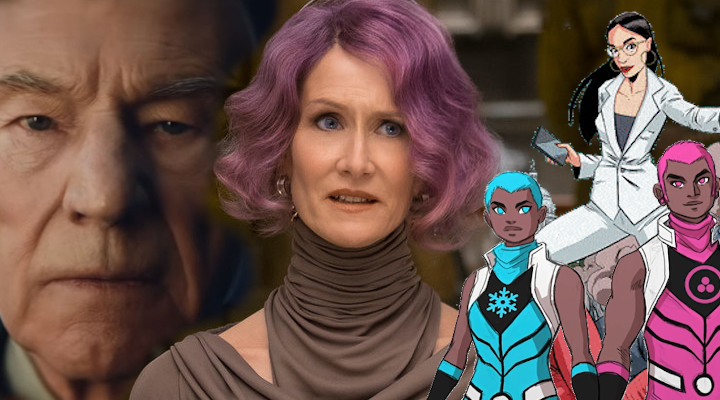 What Can the Church Learn From the Pop Culture Woke War?

You’ve heard about the woke war in the church by now. I remember when “social justice” was solely a thing I heard within the university parachurch ministry, but it’s now within the church walls full-bore. You’ve probably seen the leftward drift in our popular art. And if you had been completely avoiding Hollywood products for the past ten years, now it’s invaded your sports. The sports world hasn’t had much of a chance to experience a counter-reaction, and it’s arguably too early to tell whether recent low TV ratings have more to do with forced wokeness or the lack of fans in the stands strongly changing the experience from home. However, that’s not the case with popular art, which has been dealing with wokeness for years.

This is an actual comic book cover. Image: Devil’s Due Comics

Lately, I’ve taken a strange liking to some commentators who decry the ever-increasing wokeness of popular art. They believe that this wokeness is destroying longstanding entertainment franchises and even the comic book industry as a whole. As it turns out, worldview-concerned Christians with young children aren’t the only ones noticing and speaking out. Scripture is sufficient for us to respond as the church within our own walls, but I believe what we’re seeing in popular art provides a helpful cautionary tale.

Cultural trends surely come and go. Today’s entertainment-hungry consumers have far more available diversions than comic books and graphic novels. It’s also now possible to read these products digitally and completely avoid the traditional brick-and-mortar comic shop. These things are inevitable, but two other things should not have been: the insertion of identity politics into the content of comic books and creators on social media openly insulting fans who are tired of having their beloved franchises and characters “vandalized” (their word, not mine).

Consider how this was described in late 2017 by Alexander Adams in Spiked:

Although so-called social justice warriors (SJWs) in creative industries offer new alternatives, they also demand extensive changes to existing properties. The approach is primarily destructive rather than creative. To an SJW, the status quo is actively oppressive therefore it must be reformed, controlled or abolished in a no-holds-barred culture war. Beloved popular characters and fictional universes in all areas (from comic books and video games to literature and fine art) are targeted for immediate transformation. Marvel, aware or oblivious of exactly what activist creators had in mind, acted on the advice it received.

Activism driven by identity politics and the traditional superhero culture are not a good fit. When activists appeared in editorial and writing roles, long-term fans suspected that entrants were not motivated by a desire to tell stories but to tear down much-loved characters.

Soon Marvel’s roster of heroes appeared almost unrecognisable to long-time readers: Iceman was gay; The Hulk was a Korean-American; (versions of) Spiderman and Captain America were black; Thor, Wolverine and Hawkeye were women; Iron Man was a teenaged black woman.

It’s not as if comic book fans are all racists and sexists. Female superheroines have been well-received and popular. So is Black Panther. But teenage black woman Iron Man…is not Iron Man.

Come 2020, two new forces have combined to rescue struggling brick-and-mortar comic book stores. The first is COVID-19. The second is a reboot of Marvel’s The New Warriors, which introduces new characters named Snowflake and Safespace. Okay, I might be speaking with a little sarcasm, but I did not make up those character names. As of now (September 2020) however, it appears Marvel has at least delayed if not outright canceled The New Warriors due to the massive backlash. Indeed, these companies still have to run on money.

Science fiction also has its own struggles, and they’ve been especially visible with the Star Wars and Star Trek franchises. In the case of the Disney Star Wars trilogy, the numbers tell the story. The Force Awakens ran on a budget of around $300 million and profited a cool $2.068 billion at the box office. The Last Jedi saw its box office number drop to $1.333 billion. The Rise of Skywalker dropped further to $1.074 billion. As of April of this year, toys from episodes seven through nine aren’t selling well. It would be unfair to attribute the entire fall of revenue to wokeness, but wokeness is definitely part of it. Fans dislike Rey Skywalker as a Mary Sue, a completely implausible character who is skilled at absolutely everything she attempts without having to train anywhere nearly as hard as her peers. Admiral Holdo, a.k.a. “Admiral Purple Hair,” serves as an exemplar of feminism. She has no obligation to explain herself, and when the mansplaining Poe Dameron objects and comes up with his own plan, it’s the mansplainer who loses. You should have just listened to women, man! Merchandising: where the real money is made! Image: Spaceballs / MGM.

I committed the error of watching the entire first (potentially only) season of Star Trek: Picard. The whole thing is a deconstruction of all that was good and honorable about The Next Generation. Starfleet, once a shining armada from a future human utopia in which racism was eradicated, now is hopelessly corrupt. Also, Starfleet’s senior leadership is made up entirely of women, which is awesome, except that they’re hopelessly corrupt, which is…um…awkward. Maybe they could have conveyed a higher view of women in leadership, but whatever.

Anyway, though the Federation had been in a years-long effort to build ships and rescue the people of Romulus when their star went supernova, they abandoned those efforts because they were racists against Romulans and synthetic lifeforms. (I won’t bog you down with the details.) In the end, Picard dies and is brought back as a synthetic lifeform, which sets him up as an “oppressed minority” for subsequent seasons.

Numbers are hard to come by with respect to Picard since it’s locked up on CBS All Access. However, rumor indicates that its viewership went down by 50% by the time its season finale was released. Things Above Us isn’t the right medium to list all the continuity and canonical problems therein, but Twitter is, so you might find this thread helpful if this happens to pique your (dis)interest. A scene in Harley Quinn: The Animated Series mocks fans who dislike how their franchises and characters have been vandalized. Female alien in the background censored by the author. Not sorry. Image: Warner Bros.

First, critical theory and its destructive nature are identified. It’s not as if the vast majority of Internet commentators on popular art are Christians. In the end, they’re looking to be entertained. If critical theory / wokeness doesn’t care about science fiction canon as the fabric which holds a franchise like Star Wars or Star Trek together, it certainly will not care about the biblical doctrines and natural law that have served as our societal fabric for centuries. Lately, even President Trump has gone in on opposing critical theory. You can have your opinion on whether this is heartfelt or political on the part of the president, but I don’t believe we can say it’s “creeping” in at this point. People, whether for or against, and both inside and outside the church, are beginning to identify what is going on.

Second, natural law still exists in the public mind…for now. If the entire society were given in to critical theory, we would not see such a fan backlash and such decreasing numbers. As it turns out, even non-racist, non-sexist non-Christians don’t like being called racists and sexists. Women who personally don’t subscribe to outdoing men at everything (which is still most women) don’t find Rey Skywalker to be a compelling character. The men don’t either. I actually felt encouraged as of late at the overwhelmingly negative public reaction to Cuties, a movie to be released on Netflix which hyper-sexualizes children. One has to ask at some point when commercial viability ceases and corporations try to pull their creators in the other direction. After all…

Entertainment companies still run on money. Not only do they run on money, but they’re also publicly traded and—theoretically—accountable to investors. There’s more to be said with regards to a company’s moral compass when it’s owned by a faceless horde of investors—to whom the board of directors is legally obligated to provide the most profits possible—rather than a strong central figure with a solid traditional worldview like Walt Disney himself. If the rumor is true, Disney (the company) has noticed and may be attempting to “de-woke.” [language warning] After all, we’re still not in a totalitarian state, therefore…

You can control the information flow to your own home. My review of The Trojan Mouse might have made me sound like those who advocate a complete Disney boycott, but that still doesn’t seem viable, let alone effective. As far as your eyes and the eye of your children are concerned, you are in control. If you feel like you’re not in control, then you need to regain control.

Finally, God and His Word do not change. It’s too easy to treat the immutability of God as just another item in the list of God’s attributes without really appreciating it. We might find a song that repeats the lyric, “You never change” and be tempted to dismiss it and say “Okay, I get it, yeah.” Christianity doesn’t have a monopoly on the word ‘canon,’ but you do have to chuckle at how different entertainment franchises end up having fights over what is ‘canon.’ “Is The Last Jedi canon?” “In which timeline do Discovery and Picard exist?” “How could Disney just completely erase the Star Wars extended universe like that?” It’s funny from a distance, but it’s also no wonder. Can you imagine what it would be like if we were still debating what’s in the canon of Scripture? What we still do see is battles over extra-biblical revelation and the sufficiency of Scripture, especially now in light of critical theory. It’s no wonder that local churches that get soft on the sufficiency of Scripture have similar problems.

I believe we can learn from this other woke war in popular art. Let it be a warning.

These are a few helpful links that provide additional information on the pop culture wokeness issue. They are all secular, therefore language warnings apply.