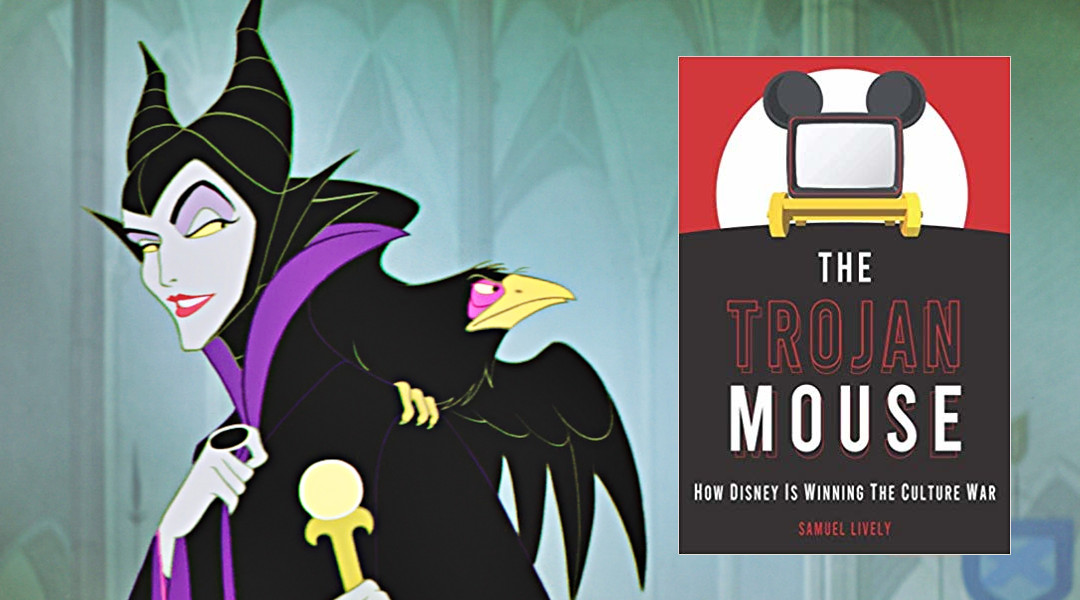 I’ll admit from the outset that I was never a huge Disney fan as a child. In fact, I rather disliked nearly everything on Disney Channel, and I can’t recall ever visiting a theater to watch a movie from Disney proper (as opposed to Pixar or other Disney subsidiaries). Forgive me; I much preferred the inherent masculinity of Teenage Mutant Ninja Turtles fighting criminals, saving the girl, and chomping on pizza versus Aladdin dancing and serenading with a French baguette (which he stole). So you should recognize that I’m already a bit of a Disney hater and thus am inclined to like anything that criticizes them. The Trojan Mouse: How Disney is Winning the Culture War by Samuel Lively is such a criticism. It’s an eye-opening look at the chronological evolution of Disney movies and what’s really going on behind them. Parents should find it to be useful in understanding not only Disney movies in general but also the vaster swath of youth entertainment coming out of Hollywood and Burbank. Unfortunately, it also seems to fall short on practical and theological application.

Will you enjoy reading The Trojan Mouse? Here’s a bit of a litmus test if you wish to take one. Head over to Gabriel Hughes’ blog and read his analysis of the Queen song, “Bohemian Rhapsody.”1 If your reaction is, “Seriously, Pastor Gabe is “way too pendantic” or “lighten up,” you probably won’t like The Trojan Mouse. Much of its content is analysis similar to this of one movie after another, albeit not analyzing every single line of dialogue and lyric. If that analysis hits the spot for you, you’ll enjoy the book. In either case, I’d encourage you to read it anyway.

The kinds of people who read Things Above Us are mostly the kind who know how to find bad theology in sermons, books, tweets, and even songs. We find wonky tweets, screenshot them, and poke fun at them. As far as movies are concerned, we’re probably good at shielding our children from objectionable content like bad language and Ariel’s bikini top (you do object to that, right?). But the overall message of a “clean” movie is something we might completely skip over, even when we’re watching a movie for our own entertainment as well. After all, we’re all probably just looking to quiet the kids down and enjoy ourselves a couple of hours of entertaining brain rest, and those two things aren’t going to happen together by setting the television to play continuous episodes of Fancy Nancy.2

The truth, as Lively argues, is that we let our guard down to storytellers to the point of “suspension of disbelief.”

We grant this suspension of disbelief easily to storytellers because of our uncontainable love for stories. Like Princess Jasmine throwing caution to the wind for a magic carpet voyage, we cannot resist the chance to experience a whole new world. So for two hours, we grant the storyteller the absolute power to pull our heartstrings, to remake our world, to make us believe in something bold and new and dangerous.

Of course, this suspension of disbelief isn’t absolute. Sometimes, a story can be so overt about its objectionable message that it raises red flags. If you need an example of hiding such things poorly, look no further than my posts (1 | 2) concerning The Orville. This change within Disney has occurred slowly but surely from one end to the other, as Lively goes on to explain.

The broad narrative of The Trojan Mouse is that Disney movies after the release of The Jungle Book (1967) — which corresponded closely with Walt Disney’s death in 1966 — have been on a slow but sure trajectory from “Loyalist” morality to “Revolutionary” morality. These two sides permeate the entire book and, indeed, nearly the entire history of Disney movies.

Loyalism, as Lively describes it, rests upon three pillars:

You might guess what being Revolutionary means at this point: pretty much the opposition to Loyalism, however it might be dressed. These are the two sides of the culture war as Lively describes it.

From the Golden Age to Now

To summarize, Lively describes Disney’s “Golden Age” as between 1937 and 1967 with such stalwarts as Snow White and the Seven Dwarfs, Sleeping Beauty, Cinderella, and Jungle Book. He then describes three more “eras,” the final one being the “present ‘woke’ era.”

Rather than coldly describing each era, I’ll present a movie from each end of this progression. Consider every macho eight-year-old boy’s favorite, Sleeping Beauty (1959). Okay, I jest, but hang on here.

Sleeping Beauty retains the core elements of the previous Disney fairy tales: the blend of pagan story elements with Christian morality and symbols, the grace-dependent princess and the Christ-like prince, and the battle between upright patriarchy and twisted matriarchy for social control. At key moments, it dispenses with all subtlety to become a Christian redemption allegory.

Did you see that description coming? I did not. Lively goes on to explain that in Snow White, Cinderella, and Sleeping Beauty, “evil is personified in twisted matriarchy.”

Five decades later, Disney gave us Maleficent (2014), a live-action adaptation named for Sleeping Beauty’s villain. I know that Disney’s taken plenty of heat because these live-action remakes seem like cash grabs, but consider how the content changes.

Maleficient’s revisionism revolves around the title character and, through her, completely reverses the Christian ideas of good, evil and redemption from the original. In an intersectional moral hierarchy, Maleficent, a pagan sorceress and a powerful woman, simply cannot remain as truly evil. So Woolverton [feminist screenwriter] flips the script and starts her off as a righteous guardian of nature. Her later evil turn only happens because she is victimized by imperialist white patriarchy.

That indeed is some change. While it would be easy enough to dismiss one or two movies from the five or ten years as being overinterpreted by zealous conservatives or just outliers made by especially left-leaning filmmakers, it’s difficult to deny the frog-in-boiling-water metaphor.

The Trojan Mouse’s central content focuses on full-length feature films from Disney proper and Disney’s corporate governance, though there is also an informative historical discourse on Pixar included in an appendix. Notably missing in terms of Disney products are Disney’s cable television channels and show. Most recently, producers of the children’s series Star Wars Resistance (2018–present) confirmed that two main characters are a homosexual couple.3 In 2017, the Disney Junior (i.e. for preschoolers!) program Doc McStuffins aired an episode featuring a female homosexual married couple.4 In 2013, Good Luck Charlie featured a male homosexual couple5. While a full-length analysis of the history of Disney television channels would have pushed the book to a ridiculous length, a summary analysis would be beneficial.

How to Fight the Culture War

Much of the sixth and final chapter concerning our response is good. Indeed, we do need to admit the problem and understand it, and we should be critical consumers of entertainment. And unfortunately, boycotts have been and likely will continue to be ineffective. Lively has some good words concerning discussing popular entertainment within “Loyalist spaces such as the church and the home,” but one thing is sorely missing.

Our discussion here isn’t complete without some consideration of what Scripture calls us to do in the context of a culture war. Must we take on Hollywood directly with our own entertainment products? Or is believers’ role in our present culture war strictly limited to child-rearing, evangelism, and missions, trusting that these ultimately will subvert the Revolutionary culture?

Unfortunately, we don’t get that discussion in The Trojan Mouse. In fact, the necessity of evangelism, even of our own children, is completely missing. Making young Loyalists of our children may have positive societal effects, but that’s not enough. The spiritually dead must be made spiritually alive. Our hearts of stone must be turned into hearts of flesh. We must dispense with our former way of thinking and have the mind of Christ. None of this happens without the Gospel.

Despite this major flaw, I can still recommend The Trojan Mouse as a valuable resource for parents. And since it’s a small, probably self-published effort, it’s presumably not too late to fix these flaws and produce a better book.