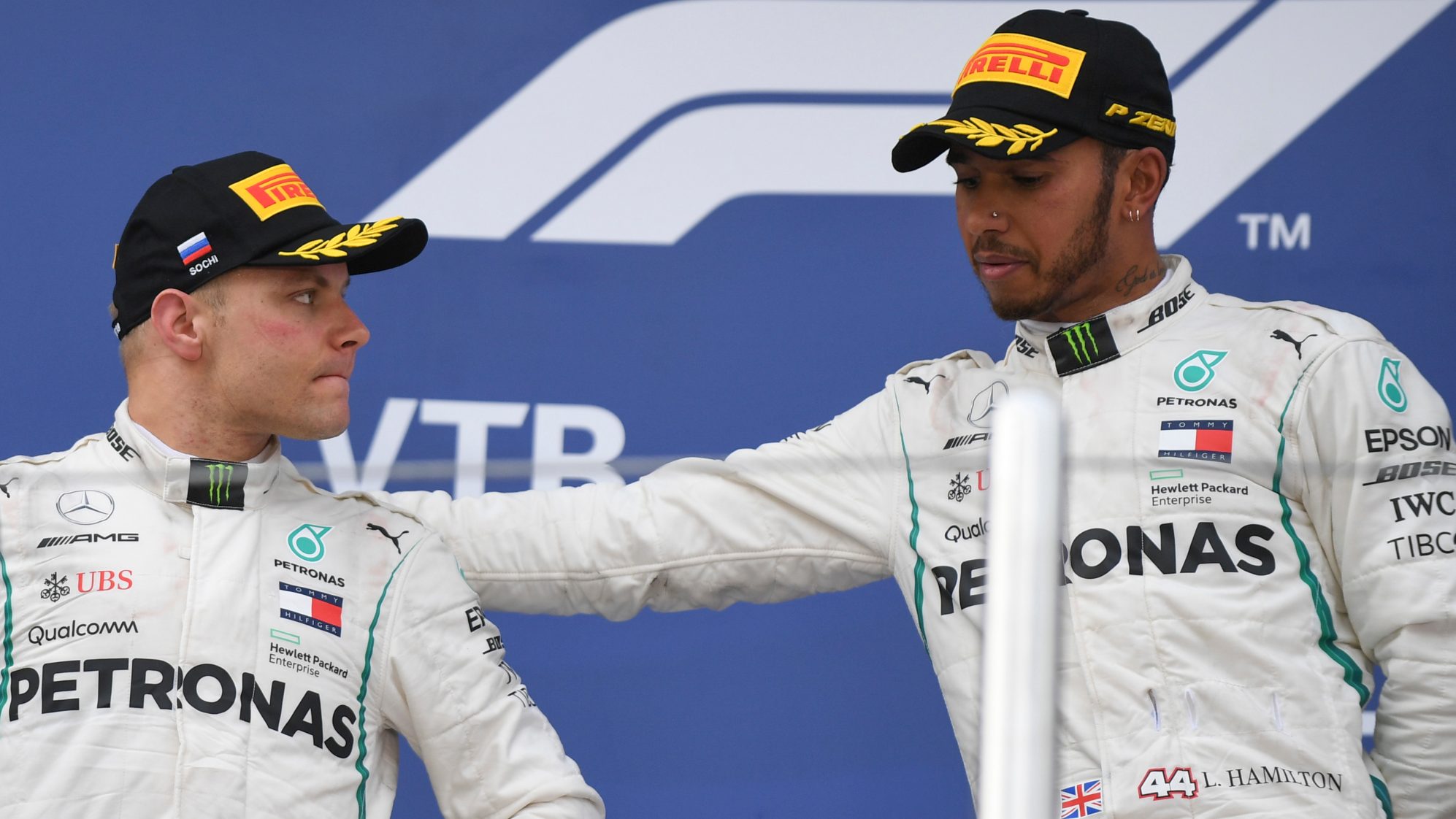 Is that Mike Abendroth in the front driving the Henault car? Or is Mike in the back? I can’t tell! (Source: Formula1.com)

Formula 1 traditionally has consisted of a group of two-car teams. Both cars of a team must run substantially the same color design. Since there are ten teams, there are ten pairs of cars, and each pair looks almost exactly alike except for small elements that distinguish the cars from each other, primarily car numbers and the color of the camera housing at the very top of the car (either black of fluorescent yellow). This can often be confusing for new fans who are trying to match drivers’ names to cars and somehow keep guessing incorrectly.

The additional element this system introduces is a much bigger team concept than what we might be used to in the United States. First, Formula 1 really has two championship battles going on at the same time: the drivers’ championship and the constructors’ championship. Each driver earns a certain number of points for each top-10 finish. Each constructor (Mercedes, Ferrari, Red Bull, Renault, etc.) also earns those same points. In the case of the Mercedes team, Lewis Hamilton has 306 points, and Valtteri Bottas has 189 points. Therefore, Mercedes has 495 points. On top of that, the constructors themselves still have an interest in gaining the drivers’ championship because of the bragging rights and sponsorship value involved.

Coming into last Sunday’s Russian Grand Prix, Valtteri Bottas qualified on the pole with Lewis Hamilton second and Ferrari driver Sebastian Vettel third. Hamilton was first place in points, 40 points ahead of Vettel. Most other drivers are mathematically out of contention. Two other drivers are mathematically in contention but would only win in very unlikely scenarios. Just under halfway through the Russian Grand Prix last Sunday, Mercedes teammates Valtteri Bottas and Lewis Hamilton were running second and third. First place driver Max Verstappen (Red Bull) had not taken a pit stop and would need to take one for fresh tires, so Bottas was in control of the race. Mercedes had botched Hamilton’s pit strategy by having him pit too late, causing him to come out of his pit stop behind Ferrari rival Sebastian Vettel. Hamilton did his best work with a brilliant overtake against Vettel, but in doing so, he inflicted extra wear upon his tires which he would have to nurse to the finish, and Vettel was threatening to take position back from Hamilton.

With Bottas out of reasonable contention for the drivers’ championship, Mercedes made a controversial strategy call: they ordered Bottas to give way to Hamilton to protect his drivers’ championship standing. Despite reasonable speculation that Hamilton would try to safely give the lead back to Bottas on the final lap, Hamilton crossed the finish line first. Following team orders, Valtteri Bottas (left) slows to allow his teammate, Lewis Hamilton, to pass in front. Hamilton would go on to win the race.

The “team orders” debate is nothing new even this season, though this is the first time this season that a driver has literally given up a race win. After several instances of teammates colliding, the Force India team has literally ordered its drivers not to race each other. This past Sunday, the drivers were running 9th and 10th, and the team actively managed who was in front based on ability (or lack thereof) to overtake the 8th place opponent. Shockingly, there’s a Wikipedia article called “Team Orders” that goes into impressive detail. If you enjoy sports controversy in general, you’ll find it entertaining.

For what benefit mathematically? In the F1 points system, first place gets 25 points, second gets 18 points, and third gets 15 points. Because Vettel was unable to overtake Bottas for second, Hamilton expanded his points lead from 40 to 50 points. If Hamilton had stayed in second, that lead would now be 43 points. And if Vettel had managed to overtake Hamilton, the lead would then be 37 points. Five races remain, which means each driver can earn up to 125 points. Valtteri Bottas and Kimi Räikkönen are mathematically in contention, but such a winning scenario for either Finnish driver is highly unlikely. In the constructors’ standings, inverting the two Mercedes cars gave them a greater guarantee of securing first and second place over the third and fourth place Ferrari cars.

At what ethical cost? As with previous instances of team orders affecting the winner of the race, the post-race celebration was a mixture of class and political correctness. Everybody knew Bottas was the rightful winner. Hamilton held back from any motion of celebrating as he stepped out of the car until he could walk over to his teammate and give him some encouragement. They all managed later to say some nice words about winning and losing as a team, etc., and they politely received congratulations and trophies from Vladmir Putin (yes, that one) and other dignitaries. Fans on social media, yours truly included, were outraged, having been desperate to see Bottas get a shot at victory after having endured a long drought and having had his benefit laid aside for Hamilton before. Suppose that a certain level of disaster strikes Mercedes, and Vettel manages to move the margin to Hamilton closer. Will it really feel like a well-earned drivers’ championship if Hamilton wins by a smaller margin than he gained by team orders? We F1 fans are probably just stuck with this happening occasionally, but that doesn’t make it any easier to watch when it does.

Can we issue any kind of moral or ethical dictate here? Mercedes has some heavy responsibilities to balance. They’re responsible for setting up a car in which Lewis Hamilton is capable of pursuing the drivers’ championship, and they’re responsible for bringing the constructors’ championship home as well. Sebastian Vettel himself called Mercedes’ decision a “no-brainer.”  Much of the discussion centers around scenarios of probability considering Hamilton’s lead in the drivers’ championship and Mercedes’ lead in the constructors’ championship with now five races left. What if this were the final race, and the position swap were the deciding factor in either championship standings? Perhaps the mathematical situation ought not to play into such ethical issues. Either it’s “team first, team always,” and the swap was okay even though it stinks, or it’s never okay. Finding a tenable middle position is far more difficult.

Given how even the Mercedes drivers and crew members felt after the race, they all know that something here is off. If they hadn’t swapped, maybe we would be praising Mercedes for its fortitude, for sticking to principle and standing behind their driver. They could more likely say confidently, “We can win both championships without team orders,” or “we want to win the right way.” Something inside says that was the right thing to do regardless of the mathematical situation.