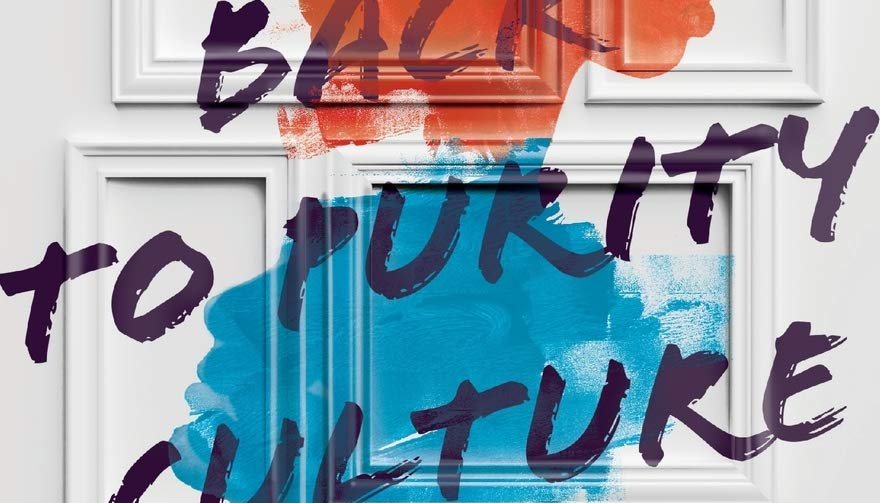 Here in 2021, it appears that the concept of “purity culture” has imploded upon itself. Joshua Harris was sort of a punchline even before he announced his apostasy. Every Man’s Battle series author Stephen Arterburn is on his third marriage. He divorced his second wife after meeting his third wife at one of his purity seminars.  Wild At Heart author John Eldredge is an open theist and, at least in my own experience, has been called out as a false teacher with sufficient regularity.

But even as the popularity of these books fades, their cultural influence seems to have persisted. Nowadays, popular argumentation seems to have more to do with women’s modesty than dating rules. There are also some other books on dating for young adults out there from the more reformed side of the theological spectrum, but I’m not aware of any that specifically rebut purity culture.

Enter Talking Back to Purity Culture: Rediscovering Faithful Christian Sexuality by Rachel Joy Welcher, which is written not only on the affirmative side of expressing a view of sexuality but also specifically rebutting purity culture and pointing out its negative effects. There are also some concerns about the book as well as Welcher’s ministry at large that prevent me from granting a full endorsement. Here in part 1, I’ll address purity culture’s idolization of virginity and the issue of women’s sexuality and responsibility.

Welcher does well to point out the bad theology behind purity culture’s emphasis on virginity. This is not to say that virginity is not a valuable thing to preserve. However, there are at least two issues. First, there can be false motive — presented by teachers and believed by young adults — as to why virginity is important. Examples include the external approval of others, the promise of really good sex in marriage, and the promise of never, ever having to worry about extramarital sexual temptation once married as long as one does everything right while single. Rather, purity should be pursued for God’s glory. Michael explains this here and wrote about the same virginity phenomenon here.

A second issue is having a right view of sexual sin. Welcher writes:

I may have been a virgin when I got married, but I was already a sexual sinner. As a young believer, my virgin status kept me from recognizing this. It was so easy to justify my lust and selfishness by telling myself: “You have never even kissed a boy.” I knew plenty of others who had not only kissed their boyfriends but had done a lot more. My childhood best friend was pregnant by the age of fifteen. Surely I was sexually pure by comparison.

But I was not. Jesus’ words from the Sermon on the Mount are chilling in their inclusivity: anyone who looks at another person with lust has committed adultery with them in their heart. I may have been a virgin when I got married, but I was also an adulterer. Virginity means only that an individual has never decided to or been forced to have sexual intercourse with another person. It is not a badge of holiness, a sign of sexual purity, or a ticket to heaven.

Welcher does well here to disambiguate this certain cultural sense of “technical virginity” (Welcher’s words) with actual biblical purity, and it’s much appreciated.

Many gallons of ink, or terabytes of Unicode if you will, have been spilled in the past couple of years concerning women’s physical modesty. From my own observation, there tend to be two sides. The first will say that women have the responsibility to dress modestly so as not to unnecessarily cause a brother to stumble. The other side will say that this places an undue burden upon women. I’ve never seen such an online discussion actually progress or cause someone to move to the other side. Welcher does well to pierce some of the divide in a few respects but misses in another.

I appreciated Welcher’s emphasis on women’s own sexual desire. For one, she takes down the cultural trope that women have less sexual desire than men and therefore satisfy their husbands as a matter of duty. Quoting Song 1:1–4 and Deut. 24:5, Welcher concludes that “In the Bible, women are depicted as able to experience sexual joy and pleasure. And on the other end, most purity books for women address waiting rather than lust. Similar issues arise in purity books concerning, the way Welcher words it, “what women must guard.” Romance novels receive much attention while visual temptations for women are largely ignored. “Guard your heart” in Proverbs 4:23 is isolated to feelings for the opposite sex whereas the context means so much more. And in addressing sexual abuse, there is much advice to women about avoiding sexual abuse, but it “appears more as a vehicle to continue to discuss sexual immorality rather than a distinct subject that deserves its own discussion.”

There is some to like and some to dislike with respect to modesty. It’s expected that Welcher correctly notes that a woman is not responsible for a man’s sexual sin and cannot make him not sin. On one hand, it’s good for Welcher to exposit how women generally feel concerning the responsibility of being modest. It is indeed not good when modesty is couched in terms of “the sin of having a female body.”

Multiple women shared with me that, because of their shape, it doesn’t seem to matter what they wear—they get confronted. A woman with large breasts, for example, will continue to have large breasts whether she wears a turtleneck or a tank top. In purity rhetoric, modesty is too often determined by how naturally attractive or shapely a woman is rather than what she chooses to wear and the heart attitude behind it. Beauty becomes the sin, not immodesty.

Elsewhere in this section, Welcher rightly rues the day when she was teaching at a private Christian high school and a group of female students was told, “You are responsible for the purity of men.”

Welcher goes on to describe the biblical concept of modesty using 1 Peter 3:4–5 and 1 Timothy 2:9–10. In the first passage, this has to do with wives’ submitting to their husbands. In the second, as Welcher writes,

He addresses what women wear, noting that it should be respectable and discreet. But respectable dress is determined by one’s cultural context. We can and should make a point of understanding what is considered modest and humble for the context we are in, whether we are on a mission trip to Africa, on a vacation in China, or at a church picnic in North America. [emphasis added]

I don’t have a problem with this cultural context concept as a whole. One of Welcher’s examples is African women who “regularly breastfeed in public without covers.” Another is a friend who works with Muslim refugees in the U.S. who has to be especially more modest than American culture would require. Welcher expands this, asking, “What if we took the same care that we take in loving people from other cultures through our dress in our own culture?” A good encouragement indeed.

But it turns from here. Welcher cites Romans 14 in arguing, “We don’t have the freedom to judge others based on dress, but we do have the freedom to consider them in how we dress.” Later she writes, “It is not our job to judge the motives of one who eats meat or wears yoga pants. It is our job to consider our own actions and how well they fulfill the first and second greatest commandment from Jesus to love God and love others.” The reader gets a hint of this earlier in the section, where Welcher laments:

I, too, remember feeling guilty if I discovered that a shirt I had worn fit looser than I thought and that, when I bent over, I might have caused someone to sin. Despite being flat-chested and plain, summer season often made me feel like more like a potential stumbling block than a young girl excited to go to the beach. I always remembered to put shorts on over my swimsuit and to wear a swim cover when I wasn’t in the water.

Two issues here. First, Welcher sets up the inability to judge rightly as an impenetrable wall. We certainly should be careful not to do it unjustly, but are there not times when it is necessary? Second, it doesn’t leave room for judging when a culture itself may be declining or just plain wrong for taking a loose attitude towards visual lust and modesty.

Late in the book, Welcher tells a story that I think succinctly illustrates the false dichotomy.

Jessica grew up in the church during the True Love Waits era. She was told to wear shorts no higher than the length of a dollar bill above her knee, and to avoid mixed bathing and high school dances. But at age fifteen, Jessica had sex for the first time with a guy from school she’d only just met, in a Super 8 motel, with other friends in the room:

Welcher then quotes Jessica at length. Jessica talks about how she had believed “Boobs equal Value” and “the guys around me weren’t taught to value bodies, to steward them, to honor the image of God, or that sex is holy.” Welcher later laments:

Jessica’s story crushes me. I weep, thinking about my future daughter. My future son. Wondering how I can communicate God’s holiness and his grace in equal measure; how I can teach them to live God’s sexual ethic without demonizing their God-created bodies and God-given sexuality.

It is indeed true that modesty rules concerning shorts length are by all means insufficient. But neither are the rules themselves the problem. One can rightly extrapolate reasonable rules based on scripture’s commands, especially in the case of parents guiding their children.

Stay tuned for part 2, where we have lined up the prosperity gospel, John MacArthur, same-sex attraction, and David and Bathsheba.