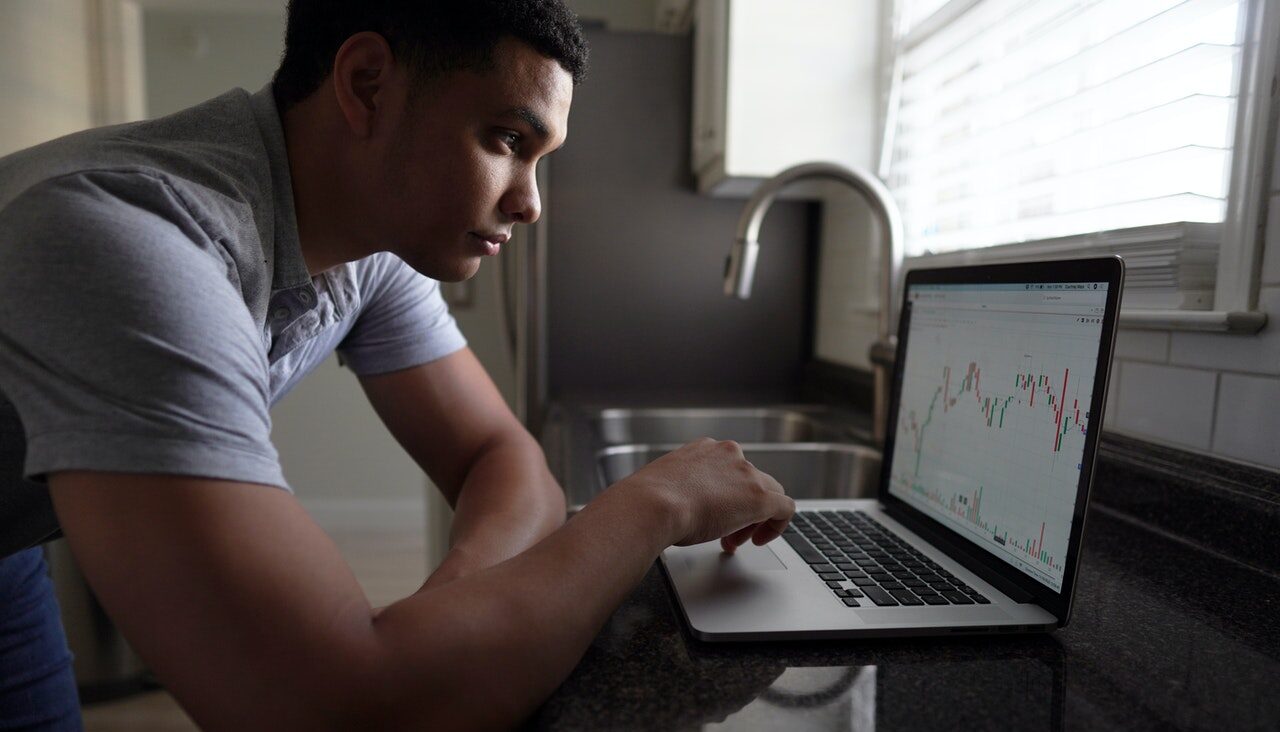 Lots of us are going to be in different places in terms of (1) our own awareness of where our investing money is going in the first place, and (2) where we actually want our money going if we’re aware. It’s not my primary goal in this series to draw you into my own position on the ethics, though I will address this to a limited degree. Rather, given my own knowledge and research into the field, I do want to inform you on some of the choices you have and things to watch out for. 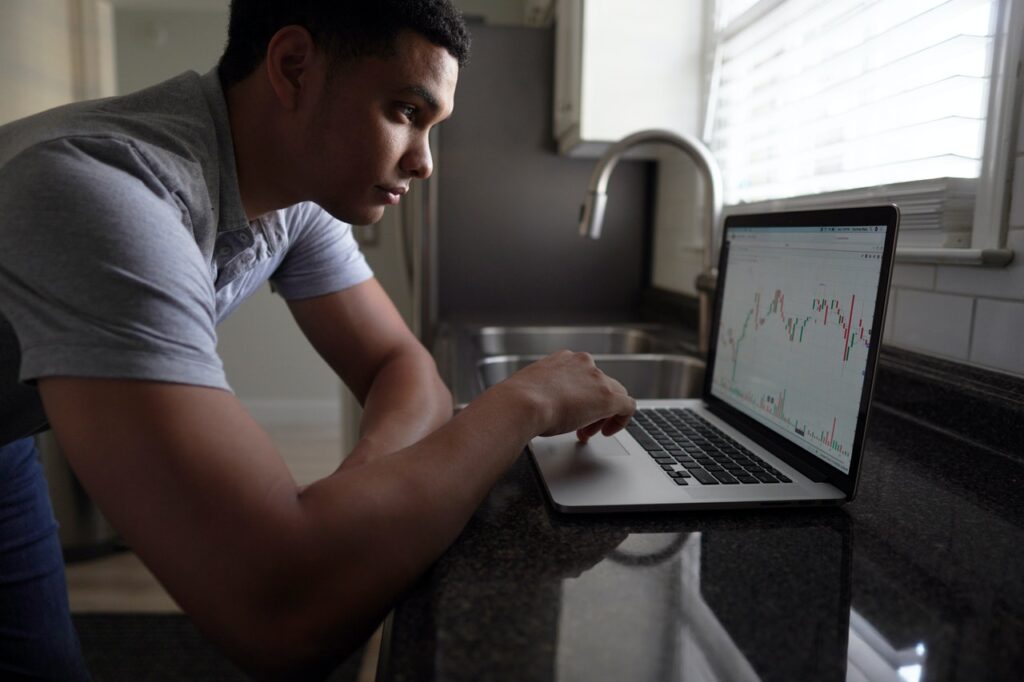 October: This is one of the peculiarly dangerous months to speculate in stocks. The others are July, January, September, April, November, May, March, June, December, August and February.

Things to Know From the Start

There has been a recent expansion of investing products, but I’m going to oversimplify here by listing three possible investing approaches. The variations on these will be addressed in the course of the series. These approaches are:

* ETF stands for exchange traded fund. An ETF goes by a ticker symbol (e.g. ITOT, VOO) and can be purchased in any normal brokerage account without formally opening a separate account with the ETF provider. They are almost always cheaper than traditional mutual funds because they involve less administrative overhead for the fund manager.

You can imagine that approach #3 is going to come with a lot of risk. Whereas an S&P 500 index fund is going to act just like the rest of the market and is diversified in about 500 stocks, you’re not going to sit down and research five hundred stocks this coming Saturday. One may also be susceptible to the temptation of just plain old stock speculation. However, for those who are strongly minded towards ethical investing, individual stock picking also comes with a large degree of control because you don’t have a manager making the decisions for you.

Note that these three approaches are not mutually exclusive for the individual investor. It is not uncommon, for example, to have a majority of one’s portfolio in index funds while also dabbling in individual stocks or actively-managed funds. Even some members of the Bogleheads forum — named for the inventor of the index fund, John C. Bogle — dabble in Tesla.

“Ethical” investing products have gone through some name changes over the years, but two seems to be standing out. In the secular marketplace, the buzz word is “ESG,” which stands for environmental, social, and governance. On the Christian side, there is less consensus. 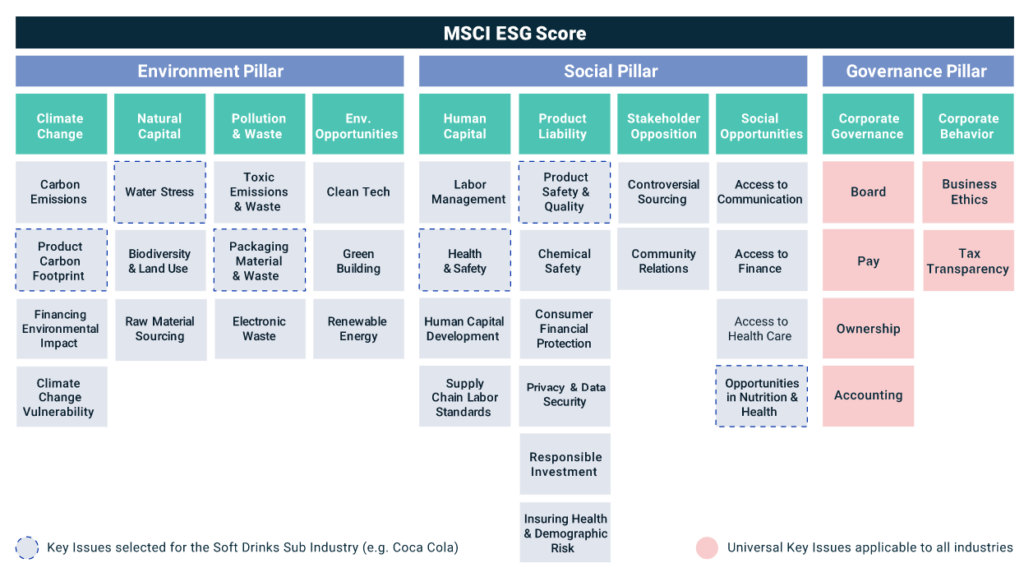 This infographic from MSCI explains how a typical soft drink company would be rated by MSCI’s ESG criteria. The criteria in red are applied to all companies, whereas the gray criteria change depending upon a company’s industry.

There is no universal standard of what is “ESG,” and not even the companies that promote it have a single standard. Going through even just a few web pages gets really confusing really quickly. I’ll boil this down into two aspects.

The first aspect is screening for negatives. This is where most of our minds probably go when we think of an investment product that promises to be socially responsible. The idea is to screen out companies where customers don’t want to invest and just invest in the ones that passed the test.

As you might expect from secular organizations, however, these screens may not necessarily line up with your own personal desires. As a typical example, I’m going to use the iShares ESG Aware MSCI USA ETF (ticker: ESGU). iShares is an extremely popular provider of exchange traded funds (ETFs), and this happens to be their biggest ESG fund — about $13 billion in assets under management. ESGU’s negative screens are the following:

I’m guessing that most TAU readers might think at least three out of the five are…well…lame. Expect nearly all ESG funds to employ negative screens like these. 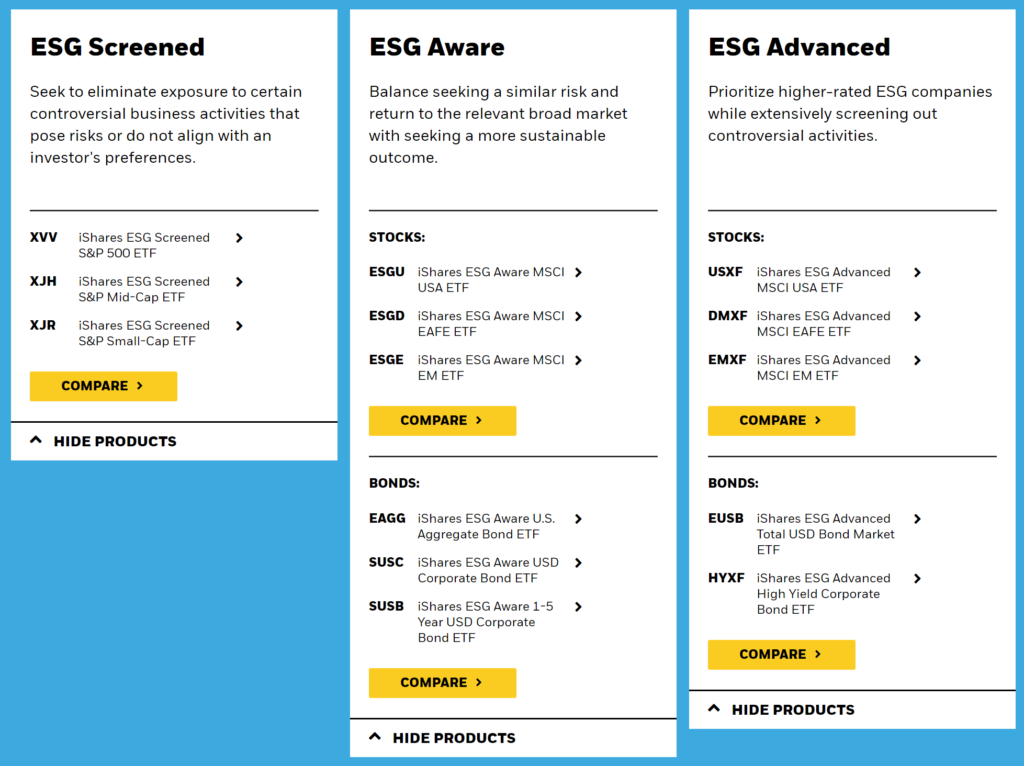 In this screenshot from iShares’ website, various ETF offerings are sorted by level of “ESG” awareness, going from mere negative screening all the way to weighting allocations of companies based on high ESG scores. (This is not a solicitation by Things Above Us to invest in any of these products.)

The second aspect has more to do with giving more weight towards companies with higher ESG ratings. The marketing claim by many ESG investment products is that we should expect ESG-friendly investments to perform better than their non-ESG counterparts because they are less likely to suffer from lawsuits, adverse legislation, and general malfeasance and skullduggery. iShares ESG MSCI USA Leaders ETF (ticker: SUSL) allocates heavier investments towards companies with higher ESG ratings. You can look up ESG ratings for individual companies at pages such as this one.

Companies are aware of these ratings and funds that track them. Think about that the next time you see a company virtue signaling in its advertisements. This has even given way to the coinage of the term “greenwashing,” when a company intentionally overstates its environmental friendliness.

And by the way, iShares considers funds like these to be index funds because they each follow an index with its own algorithm or methodology. There is no human being picking and choosing individual stocks which he thinks will outperform the market, but they are also not traditional, market cap weighted index funds. This is what I was warning about earlier when actively-managed and index monikers seemingly get conflated.

GuideStone moved to its present headquarters, a 110,000 square foot leased space in Dallas’ Pinnacle Tower, in 2018. It manages over $9.2 billion in individual investors’ assets in addition to institutional assets and non-mutual fund products.

But since we TAU types are a bunch of unsophisticated, antediluvian prudes who actually believe in Noah’s diluvium, let’s talk about a prominent Christian option. GuideStone, an arm of the Southern Baptist Convention, is “the nation’s largest Christian-screened mutual fund family.”

GuideStone Funds® provides a performance-driven, faith-based approach to investing. Our investment policy has a strong foundation rooted in Christian principles that has been developed and refined over several decades. policy states that:

By investing in accordance with our Faith-Based Investing Policy, GuideStone is promoting Christian values in seeking not to support industries that have led to family, relational and spiritual declines. As stated above, we focus on companies that are publicly recognized as being in certain restricted industries. Because we understand that it is virtually impossible to invest in absolutely “pure” companies, we do not seek a zero tolerance policy.

Unfortunately for us, GuideStone does not publish its “restricted issuers list” to the general public. This list goes only to the sub-advisers who manage investments within GuideStone’s mutual funds and “other investment service providers.” What we do know of this list from their literature is a typical range of investments that are prohibited. These include: 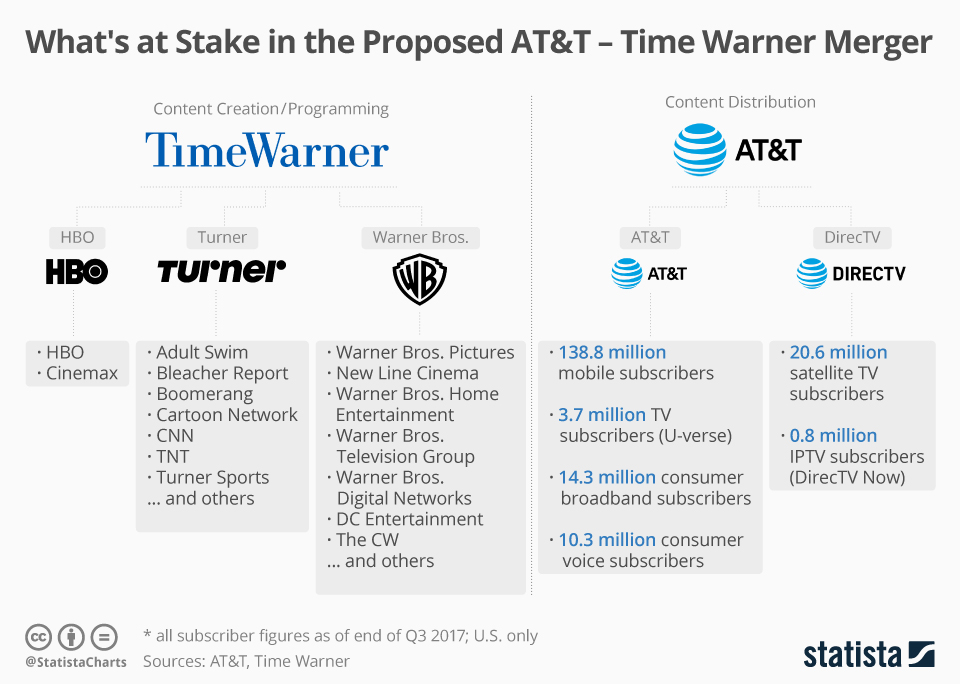 This 2017 infographic from Statista describes the then-proposed $85 billion merger of AT&T and Time Warner which the FCC originally contested. A mention of investing in AT&T might not invoke images of Game of Thrones, Wonder Woman, and Cinemax in the minds of many. (CC BY-SA)

Because we don’t have access to GuideStone’s “Restricted Issuers List,” it’s difficult to look at most of GuideStone’s SEC filings and determine whether the absence of an underlying investment has to do with its moral standing or because the fund managers don’t think it’s a good investment. This, however, is not the case with index funds because we have the entire list of S&P 500 companies. Any company, therefore,  that appears in the list of S&P 500 companies that does not appear in GuideStone’s SEC filing for its S&P 500 index fund is likely a company they have screened out. Based on GuideStone’s September 2020 quarterly report as compared with the S&P 500, the following companies appear in the S&P 500 but are not among the holdings in GuideStone Funds Equity Index (GEQZX):

However, GuideStone’s screens don’t take out everything to which you might object. Within the Equity Index fund, I found entertainment companies that have put out a myriad of morally questionable products:

Moreover, GuideStone’s international holdings (as revealed elsewhere in the most recent quarterly report) include not merely stocks of companies in China (where the state may own significant portions of such companies) but also Chinese government bonds.

Inspire’s screens may in fact be too much for some investors who wish to be socially responsible. I don’t think I know anyone who would object to investing in casual dining chain restaurants because they serve alcohol. However, the report does poke holes in GuideStone’s own screening claims. Inspire finds the following within the same Equity Index fund:

To be fair, GuideStone makes no claims to screen for “LGBT” advocacy, and many investors would find such a screen to be overzealous. But they do claim to screen for pornography, alcohol, gambling, and abortion, and those screens appear to have failed at several points here.

In sum, GuideStone’s screens do not appear to be terribly effective. Whereas socially responsible investing is an individual decision to make, individuals and institutions who do invest with GuideStone — surely a great many Southern Baptist pastors and churches — rightly expect that screening to happen effectively and consistently. Sure, Olive Garden serving wine alongside unlimited salad and breadsticks clearly is not as objectionable (if at all) as Game of Thrones, but GuideStone claims to screen for alcohol and pornography and clearly missed on the latter. It’s sort of like LifeWay promoting Beth Moore.

There is definitely more to talk about including GuideStone’s major competitors, the question of China and other authoritarian regimes, and the question of investment screening in the very first place. And can you place a dollar value on social investment screening? Does Guidestone’s average 0.92% fee of one’s investments per year really make a big difference in the long term? Spoiler alert: I don’t use any of these funds, but some are certainly better than others.